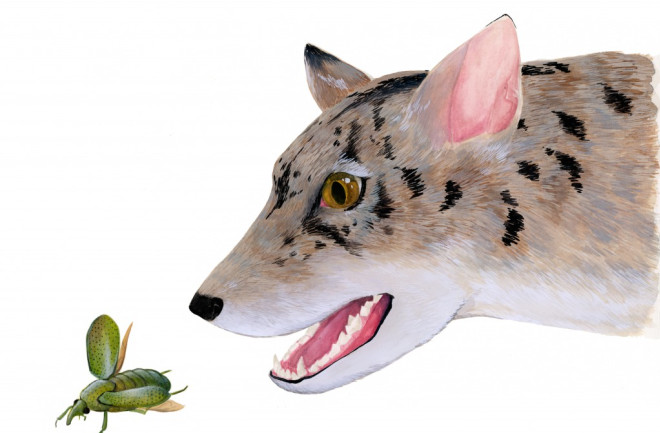 Artist rendering of a new pocket predator: a reclassified Chihuahua-sized beardog with teeth made for the munching and crunching of anything it could catch. Credit: Monica Jurik, The Field Museum. Last year, I had the pleasure (and it was a pleasure...a delight, actually) of digging through some of the off-exhibit collections at The Field Museum in Chicago. I was shadowing paleontologist Nizar Ibrahim, who was visiting the museum to take measurements of some of the many crocodilian specimens in its cavernous collection halls. We searched through row after row of cabinets and shelves loaded with orderly boxed and bagged, labeled and tagged skulls. Lights on timers sometimes flickered out in far corners of the halls, leaving us surrounded by shadow and toothy dead things. The collections are one of those places that are at once slightly creepy — especially when you turn a corner and come eye-to-eye with a large stuffed croc — and tantalizing. It was hard not to just run up and down the aisles, flinging open cabinet doors and rifling through the contents with uncontrolled curiosity. (I'm sure Field Museum collections curators appreciated my restraint.) With today's announcement of a surprise discovery among those shelves, I can't help but wonder how close we were standing to remains of the cutest little beardog that ever crushed and crunched its way through an Eocene meal. The discovery, published today in Royal Society Open Science, is a great example of why the fossils you don't see at a museum may be some of its most important. Researcher Susumu Tomiya was a recent arrival to The Field, just poking around the mammal collection to learn what was where, when he noticed something odd about a set of jaws. When it had been unearthed decades earlier at a site in Texas, the roughly 38 million-year-old specimen was assigned to the genus Miacis: primitive, carnivorous mammals with the size and low-slung build of, say, a small ferret or weasel. Tomiya thought the teeth weren't quite right for Miacis, and started to investigate. He tracked down a second specimen originally found at the same location and currently held in the collections of the University of Texas at Austin. It had been classified as another species within Miacis, but its teeth had similar adaptations to those on the jaws at The Field.

Of Bears, Dogs and The Beardog

The teeth from both Miacis specimens were shaped in a way that suggested they were used for crushing, not just slicing and shearing. That points to an animal with a diet that was more than just meat, and likely included insects and berries. An omnivore rather than a strict carnivore. Tomiya and study coauthor Jack Tseng of the University of Buffalo used HD x-ray CT scans to digitally reconstruct the Texas specimen's skull. Data generated from peering inside a braincase gives researchers a ton of information about the animal's general intelligence as well as how advanced (or not) its senses are. It's particularly helpful for understanding carnivores and how they may have hunted or scavenged. What the reconstruction showed, like the teeth, was that both fossils had been mis-Miacised. They actually belonged to two new members of the amphicyonid family, also known as the beardogs. Newly renamed Gustafsonia cognita and Angelarctocyon australis, the reclassified species are notably smaller than other beardogs, which ranged in size from fox-ish to a plus-sized Papa Bear.

This is not a beardog. Beardogs are way more interesting than this foofy Tibetan Mastiff. Credit: yeti/Wikimedia Commons. Not to be confused with over-groomed Tibetan Mastiffs erroneously labeled as bear-dog hybrids, or with Karelian bear dogs (which are modern dogs that are helping to keep bears and other wildlife from mixing it up with clueless humans), the extinct mammals known as beardogs are related to, why yes, bears and dogs. The typical beardog was heavily built and in some cases larger than a lion, with teeth adapted for crushing bones and other badassery. The beardogs were all over North America and Eurasia (a few made it to Africa). The earliest known was Daphoenus, at around 40 million years old just a little older than today's finds. It was the size of a medium dog or coyote, larger than the Chihuahua-like G. cognita or A. australis. Despite the name, beardogs are not ancestral to either dogs or bears. They do, however, share a common ancestor.

The lower mandible of A. australis (left) is petite compared with that of a more typical beardog, the black bear-sized Amphicyon riggsi. Credit: Susumu Tomiya, The Field Museum. That's why correctly placing G. cognita and A. australis evolutionarily-speaking is particularly important. Their age makes them two of the earliest amphicyonids, right at the base of that branch of the tree, which until now was pretty lacking in fossil evidence. Given they were both found in Texas, and Daphoenus has been found nearby, it could indicate that today's southcentral U.S. was a hotbed of carnivore diversity and species radiation. Having these little guys — or at least some of their parts — helps paleontologists understand where the amphicyonids came from, and how they evolved. Not bad for an animal that could have fit in a handbag.