Found: Microbes From the Dinosaur Age

Down at the depths of the seafloor, there are hidden, ancient organisms—just barely alive. 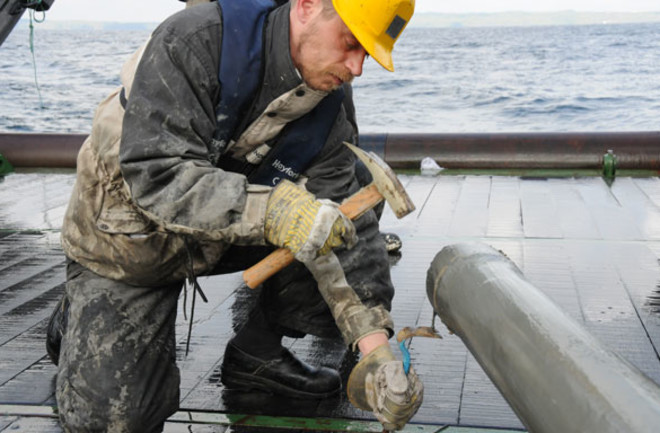 Hans Røy opens a core of sediment hauled up from the seafloor. | Courtesy Bo Barker Jørgensen

Hans Røy expected few surprises from the chunk of reddish mud his team had just hauled from the bottom of the Pacific Ocean. Røy, in the midst of a month-and-a-half-long nautical expedition, simply wanted to study the chemistry of the seafloor and determine how much oxygen it absorbs from the water above.

But after comparing predicted levels of oxygen to the new measurements, the geomicrobiologist from Aarhus University in Denmark realized that some of the expected oxygen was missing. His hunch: A hidden population of microbes was living in the mud, breathing in the oxygen.

To investigate the theory, he examined the bottommost layers of the muddy sediment. In those deep layers, Røy found about 10,000 single-celled microbes per cubic inch, alive and breathing—but only barely. The microbes metabolize oxygen at a rate one two-millionth that of cells in the human body, giving them one of the slowest metabolic rates of any organism known. “They are hanging on in a state of sustained starvation,” Røy says.

The deep layers Røy examined have been undisturbed for 86 million years, meaning that this population of microbes dates back to the age of the dinosaurs. And Røy believes that sluggish organisms like these could be far more common than we think. They might exist all around us, but in a world teeming with active microscopic life, these creatures would be almost impossible to detect. “It’s like looking for stars during the day,” he says. “You see only the sun.”