Found: Ancient Alaskan House—and Remains of a Child Cremated There 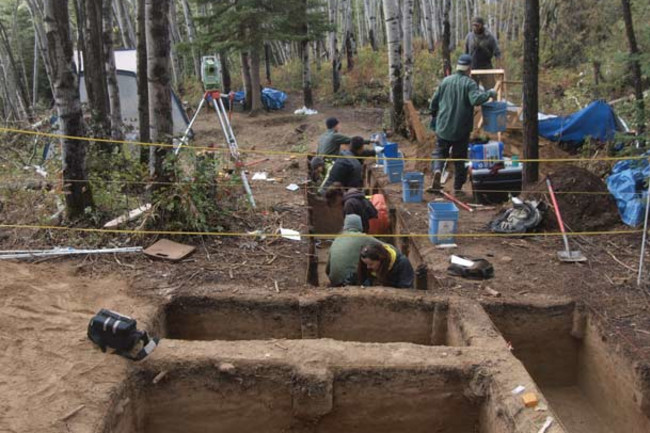 We know the Bering land bridge that appeared between Alaska and Russia at least 14,000 years ago would have allowed ancient people to cross over into America. But what were those people like? Scant evidence has turned up to reveal their lifestyle, but in the journal Science this week archaeologists report a new find—one that's simultaneously insightful and a portrait of sadness. Ben Potter and colleagues found an 11,500-year-old house that was apparently the scene of the loss of a child, as the fire pit shows the skeletal remains of a person about three years of age.

The bones are the oldest human remains yet discovered in northern North America, and provide a remarkable glimpse into the lives of the earliest North American settlers.... Older human remains and temporary hunting camps and work sites have been found, but longer-term habitations are rare. Yet the child's young age – it was about 3 years old – and the type of food remains found at the new site, suggest it was the summer home for a group that comprised at least women and young children. [New Scientist]

The place is called Upper Sun River, located in central Alaska. The child has been given the name Xaasaa Cheege Ts'eniin, or "Upward Sun River Mouth Child."

Potter ... and his colleagues discovered the outlines of the foundation of a circular house, including a scattering of stone tools and animal bones on the floor and traces of posts that may have held up the walls and roof. As the team reports in this week's issue of Science, the center of the house was taken up with a large circular pit containing the fragmented, partially burnt bones of the child. [ScienceNOW]

The team says that the details of the house and the artifacts left behind show commonalities with both archaeological finds in Siberia and America, though the structure in Alaska is closer to Siberian design than anything found in the continental United States. As for the child, Potter says it seems the fire pit was sealed off after the cremation and the family moved on. But other archaeologists suggest a more gruesome possibility than cremation.

While Potter reported that the child probably died before being cremated, Michael Kunz, an archaeologist with the Bureau of Land Management in Fairbanks, suggested another possibility: "I don't think that there is any more evidence that the burned remains of the child indicate a cremation than they indicate that the child may have been cooked and eaten." The body was found buried in the fire pit, Kunz noted via e-mail, and "the bones that are missing are the bones that have the most flesh on them and would most likely be used for food." "Cannibalism among humans is not new news," added Kunz, who was not part of Potter's team. [NPR]

Potter and his team disagreed—the bones showed some evidence of soft tissue, they say, and they appear to have been laid down in a peaceful position. Related Content: 80beats: Did Humans Migrate Out of Africa Via a Shallow Red Sea?

Gene Expression: How were the early Americas peopled?

DISCOVER: Did Humans Colonize the World by Boat?