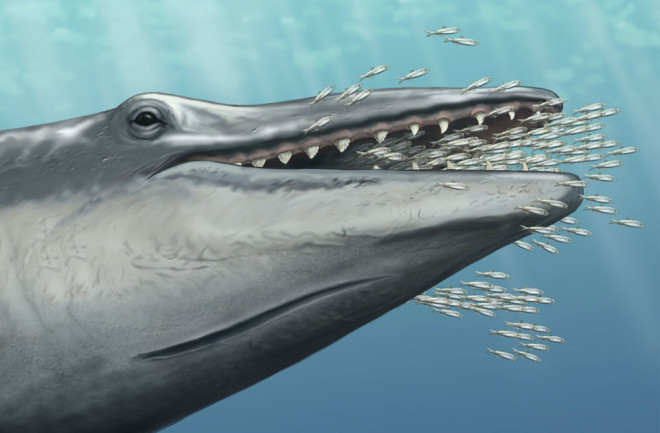 Alfred the Aetiocetid. (Credit: Carl Buell) Whales are some of largest animals to ever exist on Earth, and they have an incredible evolutionary history. Modern species can be divided into two major groups depending on their feeding style: the toothed carnivores, such as the killer whale, and those such as the blue whale that use comb-like ‘baleen’ to filter enormous amounts of plankton from seawater. Baleen is formed from a series of plates made from keratin that hang suspended from the upper jaw, and provide a distinct filtering system to that of teeth. When this dietary divide occurred in their evolutionary story has long eluded scientists, even from the time of Charles Darwin, due to an incomplete whale fossil record. That is, until now. A team of researchers from Victoria Museum and Monash University on Tuesday unveiled an extraordinary 25-million-year-old primitive whale fossil that reveals clues about the ancient transition between these two feeding types. The fossil has been nicknamed ‘Alfred’, and was discovered on the shores of Washington state by James and Gail Goedert. Despite having definite teeth, other features of the skull uniquely identify it as an early ancestor of modern baleen whales, part of a now extinct sub-group called aetiocetids. The feeding mode of these animals has been hotly debated in the past, and it's thought they used a combination of both teeth and baleen. Alfred though has definitive, well-developed teeth preserved. The scratch marks left on the fossilized teeth of Alfred further reveal an unusual method of feeding behavior never before found in a fossil whale. These marks indicate that the animal used suction feeding to gulp in water and food by creating a vacuum around its mouth, similar to living walruses.

Due to their horizontal orientation, the scratch marks cannot have been formed by tooth-on-tooth grinding. Instead, they were created by prey items and abrasive sand particles constrained in the flow, passing through as part of a feeding motion caused by movement of the tongue. However, if Alfred had possessed any form of baleen then this would have prevented the formation of the scratches by prohibiting movement of the tongue. Furthermore, there was simply no space in the mouth for baleen, as all of Alfred’s teeth occluded together nicely and left no gaps in between. Therefore the discovery of Alfred solves an evolutionary riddle by showing the step that avoids interference between baleen and teeth during feeding. Lead author Dr. Felix Marx, Postdoctoral Fellow, Museums Victoria and Monash University says: “Alfred shows how ancient baleen whales made the evolutionary switch from biting prey with teeth to filtering using baleen. They first became suction feeders. Feeding in this way resulted in reduced need for teeth, so over time their teeth were lost before baleen appeared.” The discovery of Alfred also tells us that the evolutionary development of baleen must have happened closer to modern toothless whales. “Some of the features that make it unlikely that Alfred possessed baleen are also seen in other aetiocetids. Perhaps none of them evolved it and was a feature of later mysticetes only,” says Travis Park, a PhD student at Museums Victoria and Monash University and an author on the study. By being able to efficiently ingest huge volumes of smaller bulk prey items, this reduces the need to expend more energy on hunting and consuming larger targets. This massive but previously concealed step was crucial in the evolution of baleen whales, as it is likely that this key adaptation triggered the change in physiology that allowed them to grow to such enormous sizes, and ultimately become the largest animals on Earth.