Fossilized Nervous System is Oldest, Most Detailed Ever Found 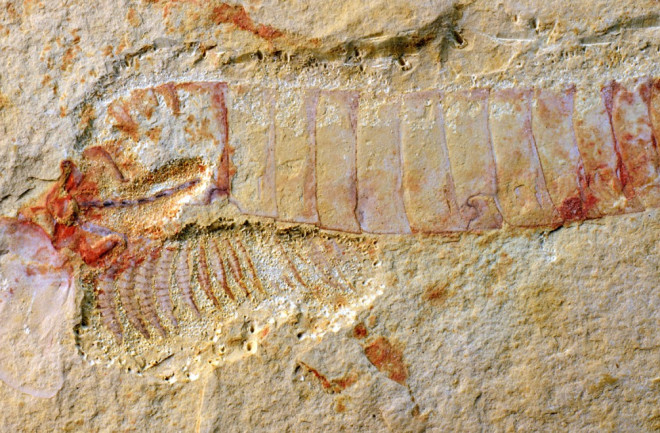 Fossilized Chengjiangocaris kunmingensis from the early Cambrian period. (Credit: Jie Yang/Yunnan University, China) A group of researchers working in South China recently unearthed the fossil remains of 520-million-year-old, centipede-like creatures whose central nervous systems had been preserved in remarkable detail, down to individual nerves. Chengjiangocaris kunmingensis was a small creature, just 2 to 4 inches long, with a segmented, armor-plated body and a heart-shaped head shield. As part of a now-extinct group called fuxianhuidae, it walked the Earth on its 80 pairs of legs during the Cambrian period, a time around 500 million years ago when primitive organisms began to evolve in many directions, causing an explosion of biodiversity. Most of the animal phyla we know today first started to show up in the fossil record during the Cambrian, and that’s what makes C. kunmingensis so important. A team of paleontologists led by Jie Yang says that studying its well preserved central nervous system could help them better understand how the nervous systems of today’s crustaceans and creepy-crawlies evolved. They published their findings in the Proceedings of the National Academy of Sciences.

Usually, all we know about extinct animals is their bone structure. That’s because soft tissue usually decays before it can be fossilized. Once in a while, however, if the dead creature was buried quickly and conditions were just right, remarkable features can be preserved in stone – like the central nervous system of an ancient ancestor of today’s arthropods. Each of the five specimens had a ventral nerve cord, the invertebrate version of a spinal cord. The nerve cord is a chain of nerve cell clusters called ganglia, linked by the long arms of neurites. In fossil form, the ventral nerve cord appears segmented in a series of light and dark bands, standing out just slightly from the surrounding rock. Each dark band is a ganglion, which would have controlled a single pair of legs. The ganglia contained the bodies of nerve cells, rich in fatty substances called lipids, which left behind dark films of organic carbon.

Magnification of ventral nerve cord of Chengjiangocaris kunmingensis. (Credit: Yu Liu/Ludwig-Maximilians-University, Germany) “Since they are mostly made of fatty substances, nervous tissues are full of chemically active components that are prone to become fossilized rapidly after death by the interaction with the surrounding sediment and water,” explained co-author Javier Ortega-Hernández. Those chemical reactions probably preserved the connective neurites, which make up the light bands in between the ganglia. Thanks to the lipids in the ganglia, the bases of individual nerve fibers also survived half a billion years in stone. Pairs of these tiny, spindly fibers – less than a thousandth of an inch long and about a ten-thousandth of an inch wide – branched out from the ventral nerve cord at regular intervals, about 12 pairs from each ganglion and four to six from each connective neurite.

Excavating such delicate structures was challenging work that started in the field and continued in the lab. To fully reveal the nerve cord, Yang had to place the fossils under a stereo microscope and then use a needle to chip away the rock matrix surrounding the tiny nerve structures. “At first we found the C. kunmingensis directly on the surface of the crack out rocks, and the delicate nerve structure could only be seen partially,” says co-author Xiguang Zhang. What the Yang and his colleagues didn’t find, however, were brains. All five specimens’ bodies came apart after death, so their heads weren’t attached. That means researchers have the oldest, most detailed ventral nerve cords that they’ve ever found, but they don’t have the entire nervous system. They’re missing the brain and the nerves that would have led to the antennae and mouth parts. Over the past few years, however, paleontologists around the world have found traces of brains, preserved as thin films of carbon, in the fossil remains a few species related to C. kunmingensis.

Those tiny pairs of nerves branching off a chain of ganglia are a primitive structure, which has long since gone out of style with the arthropods we know today. Modern arthropods have evolved more complex, specialized bodies than C. kunmingensis. Along the way, they abandoned the old system in favor of more efficient ones, with fewer, more specialized nerves. “Extant arthropods have a lesser number of nerves, but they are more organized to move the body in a more orderly fashion,” says Ortega- Hernández. These specimens are helping researchers unravel exactly how modern arthropods are related to their nearest relatives: tardigrades and onychophorans (also called velvet worms). Unlike modern arthropods, velvet worms have the same old-fashioned nervous wiring as C. kunmingensis. Modern arthropods probably evolved new nervous systems sometime after their lineage parted ways with onychophorans. Tardigrades made the same move away from parallel rows of nerves, but they did it independently, after their lineage had split from the arthropods.