Fossil Footprints May Push Back Date When Animals First Walked 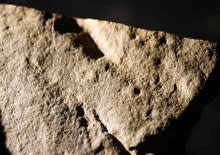 Researchers believe they have found the earliest known animal footprints, left by a centipede-like creature 570 million years ago; if they're right, the discovery means that animals were walking on the earth 30 million years earlier than previously thought. Researchers say the fossil shows a track of parallel dots, each about two millimeters in diameter, which may have been pressed into the muddy sand by the tiny feet of one of the earliest complex organisms. But some experts are not convinced by what they've seen.

Precambrian paleontologist Nick Butterfield said he was "deeply skeptical," about the conclusions drawn. "From the description—paired rows of dots—it just doesn't sound like a trackway.... Centipedes and their ilk shuffle along and leave continuous traces in soft (sub-aerially exposed) sediments—they don't carefully step ahead, lifting each foot out of the mud to place it exactly in a previously made footprint," he said [National Geographic News].

The finding, presented at a Geological Society of America meeting, was described as a happy accident by lead researcher Loren Babcock, who had been surveying rocks in the Nevada mountains.

"We came on an outcrop that looked like it crossed the Precambrian-Cambrian boundary, so we stopped to take a look at it. We just sat down and started flipping rocks over. We were there less than an hour when I saw it" [Telegraph].

Researchers are particularly intrigued by this controversial finding because the legged animals would date from the Ediacaran Period, a somewhat mysterious epoch that preceded the Cambrian Period when extraordinary rapid evolution produced most of the major animal groups. Scientists have recently challenged the notion that only microbes and simple multicellular animals existed prior to the Cambrian.

"We keep talking about the possibility of more complex animals in the Ediacaran - soft corals, some arthropods, and flatworms - but the evidence has not been totally convincing," says Babcock. "But if you find evidence, like we did, of an animal with legs - an animal walking around - then that makes the possibility much more likely" [ABC Science].