Nine years ago, a team of fossil-hunters led by Philip Gingerich from the University of Michigan uncovered something amazing - the petrified remains of an ancient whale, but one unlike any that had been found before. Within the creature's abdomen lay a collection of similar but much smaller bones. They were the fossilised remains of a foetal whale, perfectly preserved within the belly of its mother. Gingerich says, "This is the 'Lucy' of whale evolution."

The creatures are new to science and Gingerich have called them Maiacetus inuus. The genus name is an amalgamation of the Greek words "maia" meaning "mother" and "ketos" meaning "whale", while Inuus, the Roman god of fertility, gave his name to the species.

The foetus's teeth were the first to be uncovered and only as the surrounding (and much larger) bones were revealed, did Gingerich realise what his team had found - the first ever foetal skeleton of an [strike]ancestral[/strike] ancient whale (see video). Alongside the mother and calf, the group also discovered another fossil of the same species in even better condition. Its larger size and bigger teeth identified it as a male.

This trio of skeletons is so complete and well-preserved that Gingerich likens them to the Rosetta Stone. They provide an unparalleled glimpse at the lifestyle of an ancient whale before the group had made the permanent transition to the seas. How it gave birth, where it lived, how it competed for mates - all these aspects of its life are revealed by these beautiful new finds. 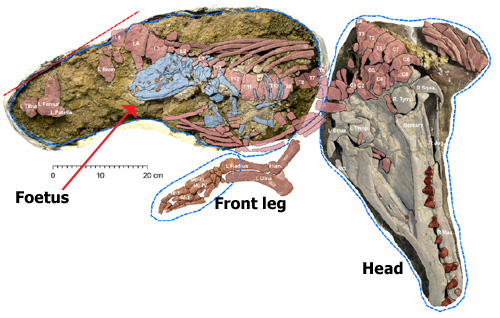 Maiacetuswasn't quite like the whales we know and love. It was an intermediate form between the group's earliest ancestors and the fully marine versions that swim about today. For a start, still had sturdy hind legs that were good for swimming but would have allowed it to walk on land.

Another piece of evidence tells us that Maiacetus was definitely amphibious - its foetus was facing backwards in the womb. If the mother had lived long enough to give birth (and judging by the foetus's size, that wasn't far off), the infant would have greeted the world face-first. No living whale or dolphin does that - all of their young emerge backwards, leading with their tails, to minimise the risk of drowning in the event of a prolonged labour. A head-first delivery means that Maiacetus gave birth as a landlubber.

Whales are so beautifully adapted to life in the water that their relationships to other mammals aren't immediately clear. Thankfully, their evolution has been beautifully charted by a series of "transitional fossils" documenting the change in their bodies over massive gulfs of time.

They evolved from deer-like ancestors, hoofed mammals that lived on land and occasionally ventured into the water. Early members of the family included Pakicetus, a meat-eater with long, hooved legs, a dog-like snout, and a distinctive inner ear that only whales and their kin possess. From there, the family became gradually more comfortable in the water, with later species like Ambulocetus having powerful tails and back legs that were clearly adapted for swimming.

These adaptations became even more extreme in the protocetids, a group that included species like Rodhocetus. They had seal-like bodies and possibly tail flukes like modern whale, but they still kept powerful hind legs to support their weight on land. Later whales like Basilosaurus or Dorudon were very different. Their hind legs were tiny - larger than those of modern whales, but useless for walking. Their hip bones were also disconnected from their spines. They were fully marine animals.

The newly discovered Maiacetus was a protocetid - several changes away from its original hooved ancestors, but not as thoroughly adapted of ocean life as Basilosaurus. Gingerich believes that it fed in the sea before coming ashore to rest, mate and give birth. Its teeth are suited for eating fish. Its legs were built to power swimming and support its weight on land, but they wouldn't have let it swim very far, or granted it with much terrestrial agility. These legs constrained the animal to the boundary between land and sea - jack-of-all-trades, but master of none. 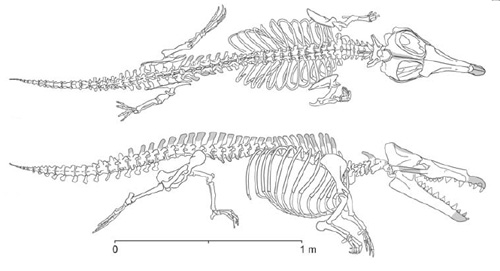 The foetus was alone in the womb, which suggests that Maiacetus (like modern whales) devoted its energy to rearing a single infant during every found of breeding. As I've mentioned, the baby would have been delivered head-first while mum was safe on land. The foetus as large and its teeth were well-developed, with the growth of its permanent teeth already underway. Among mammals, advanced chompers like these are a sign that the calf would have emerged from the womb as a mobile and capable youngster - just as deer fawns can run soon after they're born.

The male skeleton was about 12% larger than the female and in the flesh, the animal would have weighed about 39% more. Compared to other marine mammals, this size difference between the two genders is actually relatively small. It suggests that males didn't have to compete too brutally for mates for those that do (like elephant seals) grow to enormous proportions that dwarf the fairer sex. These fighters hoard females in harems, and the fact that Maiacetus didn't suggests that it couldn't. Perhaps food and shelter were widely spread out commodities that were impossible to hoard and defend.

All in all, Gingerich's latest finds are among his most alluring yet. The remains of these three individuals have lasted through 48 million years of compression and today, they paint an incredibly vivid picture of the life of an ancient species. The fact that they are whales is the icing on the cake. This group's story is one of the most beautifully illustrated in the field evolution and every new discovery is a welcome one.

Update: For other accounts of this story, I'd highly recommend reading what Carl Zimmer (Loom) and Brian Switek (Laelaps) have to say on it. Both bloggers have written extensively on whale evolution before and I used their pieces as a lot of background reading for this story.