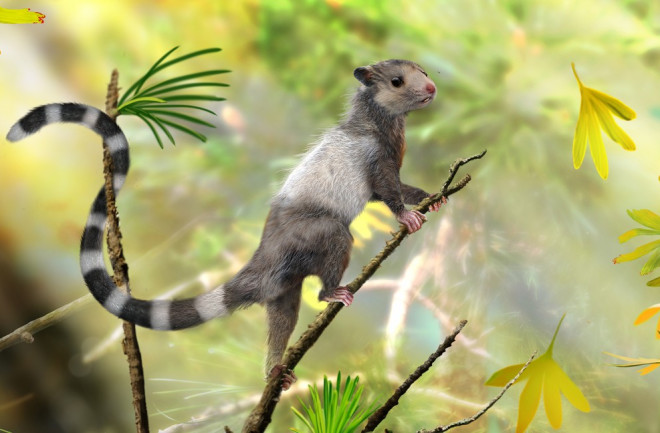 Reconstruction of a new mammal species, Xianshou songae. This mouse-sized animal was a tree dweller in the Jurassic forests. (Credit: Zhao Chuang) What looks like a rat, climbs trees and has a tail like a lemur? It’s your cousin, of course! Before you take offense to that statement, please note that we’re referring to Xianshou songae, one of three newly discovered, extinct species that lived roughly 160 million years ago. This trio of species, unearthed in China, helps settle a long debate regarding the origin and earliest evolution of mammals. So by your cousin, we mean the earliest relatives of all mammals.

One of the major unsolved problems with the mammalian family tree concerns two groups of early, rodent-like mammals: multituberculata and haramiyida. It was believed these two groups of animals were related, but in 2013 scientists unearthed two complete haramiyid skeletons that had very different features. This discovery generated conflicting interpretations about the relationship between these two groups. So what’s the big deal? Roughly 38 million years. If the differences between the two groups were significant enough, they’d be separated and mammals would have originated in the Middle Jurassic period, about 170 million years ago. If the two groups had a common ancestor, early mammals started walking the Earth much earlier, during the late Triassic period, about 208 million years ago.

Chinese scientists discovered the skeletons of six haramiyid fossils representing three different species that date from around 160 million years ago. The well-preserved skulls and skeletons revealed that haramiyida and multituberculata were indeed sister groups of each other. However, haramiyida evolved very distinct features. Therefore, scientists concluded that they evolved from a common ancestor, confirming mammals originated some roughly 208 million years ago. They published their findings Wednesday in the journal Nature. Check out the whole motley crew of our early relatives below.

Reconstruction of arboreal mammals in the Jurassic forests. The three individuals on the left side represent three new species of euharamiyidan mammals. The other two represent a gliding species and another euharamiyidan, respectively. Credit: Zhao Chuang