For the First Time, A Praying Mantis Has Been Caught Fishing 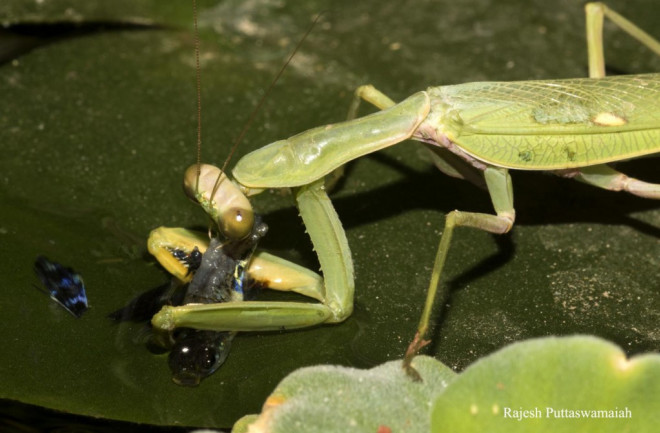 The male praying mantis (Hierodula tenuidentata) eating a guppy fish (Poecilia reticulata) starting from the tail, while the fish is still alive and breathing in the water. (Credit: Rajesh Puttaswamaiah)

There’s nowhere you can hide from the praying mantis. The ferocious insects are known to feast on a veritable buffet of living creatures, including everything from butterflies and newts to snakes, mice and hummingbirds. And now, just when you thought it was safe to live in the water, we can add fish to the mantid menu.

Three researchers report the first-ever observation of a fishing mantis, spotted in a small artificial pond in India. Over the course of five days, the giant Asian mantis caught and ate nine guppies, or almost two per day. The patient hunter would sit on the lily pads dotting the pond, waiting for an unfortunate fish to swim by. Once it had a guppy in its raptorial forelegs, the mantis would set to work on the fish, often devouring its still-living prey from tail to head.

This is the first time such behavior has been spotted in the wild, the researchers say, though videos of pet mantises eating fish abound on Youtube. Indeed, in captivity, mantises seem happy to eat almost anything they’re fed, though their ability to actually hunt some prey is questionable.

If the fishing mantis is any indication, though, the carnivorous insects are adaptable hunters, ready and willing to try out new strategies for netting prey. They also seem adept at utilizing the human-made environment to snag a meal. The guppies here were kept in an artificial pond on a rooftop, and there are numerous reported cases of praying mantises feasting on hummingbirds at bird feeders.

It’s also a surprise to researchers because mantis’ eyes are mostly adapted to daytime conditions. The fishing mantis came by only at night, though, and appeared to have little trouble adapting to the refractive shifting that occurs when light enters the water. Similar to spear fishers who have learned to strike below a fish’s apparent position, the mantis was able to account for the perplexing fact that fish underwater aren’t where they appear to be. It’s something that warrants future study, the researchers say, and hints that they’re more canny hunters than we thought.

In another surprising indication of mantis cognition, the researchers note that the insect came back night after night. This hints that it was learning from previous experience and updating its behavior accordingly. It’s offering insight into what makes mantises so deadly: Not only are the insects physically imposing, they’re surprisingly thoughtful hunters, as well.

The work was published Thursday in the Journal of Orthoptera Research.