For Sexually Confused Chickens, The Answer Is in Their Cells 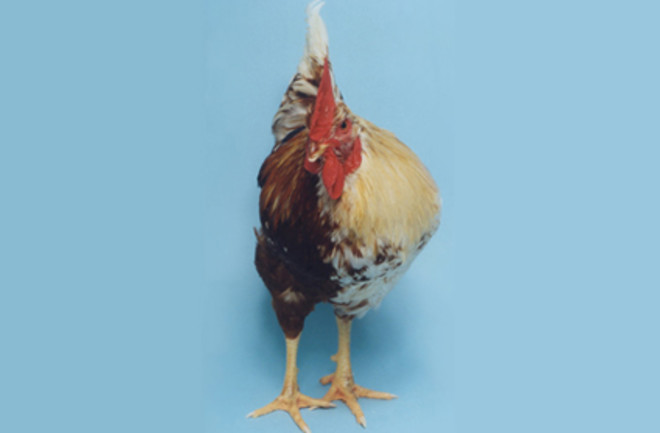 The technical way to explain this odd-looking fowl is that it's "gynandromorphous." But if you just want to call it "one seriously confused chicken," that works, too. For a new study in Nature, Michael Clinton and colleagues investigated a few of these half-male, half-female chickens they obtained from chicken farms. Gynandropmorphs show up now and then not just in chickens, but also in parrots, pigeons, and some other kinds of animals. But scientists weren't sure how the mix-up happens, since the standard idea for sex differentiation is that the sex hormones released by the gonads either masculinize or feminize the embryo. Clinton's team

discovered that bird cells don't need to be programmed by hormones. Instead they are inherently male or female, and remain so even if they end up mixed together in the same chicken [BBC News]

. The researchers had first assumed that the half-and-half chickens followed the hormone pattern, and that they were females with some sort of chromosomal problem on the male side (the lighter half of the bird in the image, which also sports a large wattle, sturdy breast musculature, and a leg spur on its male side).

. Since both sides experienced the same hormone exposure, that couldn't explain what was happening. In addition, once the team believed that cell identity was at work here, and not hormones, further experiments seemed to confirm this idea.

When the researchers transplanted tissues from genetically female embryos into what would become the gonads of genetically male ones and vice versa, the transplanted cells didn’t start expressing opposite-sex characteristics [Science News]

. Clinton's study is buttressed by others that suggest the standard explanation for sex determination doesn't apply as widely as previously thought, or at least needs some tweaking. Besides the other birds mentioned previously, some marsupials and invertebrates stray from the pattern.

“These funky chickens, oddities of nature that they are, will provide new perspectives on questions of sexual identity long thought to have been resolved,” wrote Duke University cell biologists Lindsey Barske and Blanche Capel in a Naturecommentary accompanying the findings [Wired.com]

. Become a fan of DISCOVER on Facebook. Related Content: 80beats: Rumors of Y Death Are Greatly Exaggerated; Male Chromosome Evolving Like Crazy 80beats: How All-Female Lizards Keep Their Genes Fresh Without Sex 80beats: Finch Mothers Can Subconsciously Control the Gender of Their Little Ones Discoblog: Sex Hormones in the Brain: Wimps RejoiceImage: The Roslin Institute at the University of Edinburgh