Finch Mothers Can Subconsciously Control the Gender of Their Little Ones 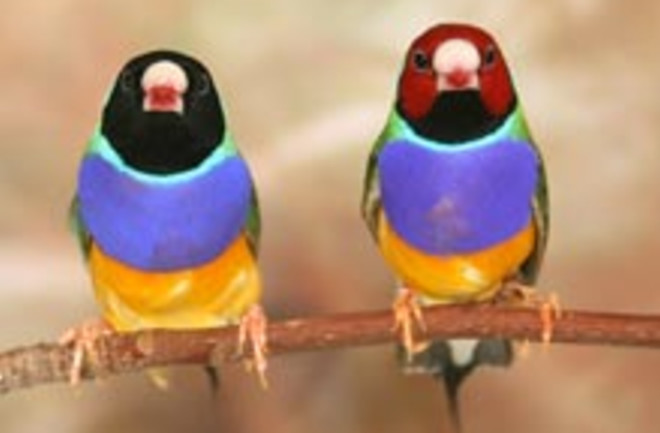 The Gouldian finch female has a neat trick for maximizing her offspring's chance of survival: If she mates with a male who is a poor match for her genetically, she increases the proportion of male chicks in the resulting brood. In a new study, researchers say they've found unprecedented evidence that these birds can exert control over the gender of their offspring. The endangered finch, native to the northern savannahs of Australia, can have either a black or red head, and the two different "morphs" have significant genetic differences, lead researcher Sarah Pryke says.

"Gouldian finches wear their genes on their head so it is easy for a female to assess the genetic suitability of the male," she says [Australian Broadcasting Corporation].

The birds prefer to mate with males that have the same head coloring, as chicks

from a mismatched mating - particularly the females - are weaker and more likely to die very early [BBC News].

In the study, published in Science, researchers

took 100 red-headed and 100 black-headed female birds and mated them with a male of the same head colour and a male with the different head colour. They found females in mixed pairs produced broods that were 82.1% male, whereas females in matched pairs produced an unbiased sex ratio with 45.9% males [Australian Broadcasting Corporation].

Then the researchers set about testing whether the females in mixed pairs were deliberately producing more sons. They tricked the females by taking red-headed males and dying their heads black.

In birds, the sex of an egg is already determined before it is fertilised by the male.... "It is pretty amazing to think that the female herself has so much control - subconsciously of course - over this basic physiology," said Dr Pryke [BBC News].

The exact mechanism by which females determine their offspring's sex

"is a big mystery," she said, but one possibility is that the sight of a mate with a differently coloured head raises female stress levels, producing hormones that interrupt the normal processes of fertilisation [Sydney Morning Herald].

Related Content: DISCOVER: Sex, Ys, and Platypuses examines how gender is determined in those complicated animals DISCOVER: A Good Reason for Sex looks at the evolution of gender DISCOVER: The Biology of Sex Ratios wonders whether humans can unconsciously influence the sex of their offspring Image: Sarah Pryke