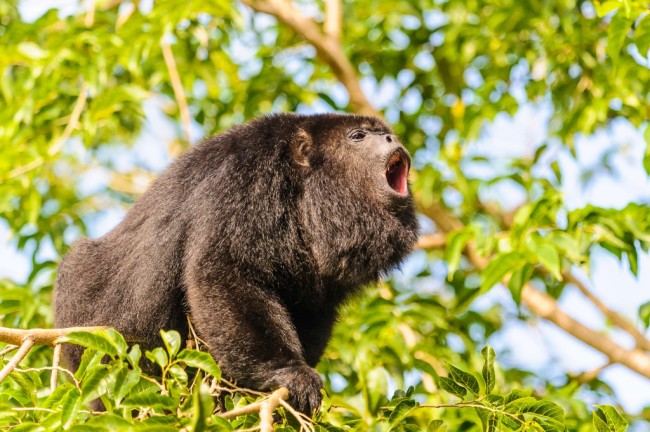 For howler monkeys, it appears the louder the calls, the smaller the — ahem — balls. A research team looking into the monkeys’ incredibly loud and low vocalizations, and the physical structures that support the calls, discovered the correlation. Animals with louder and lower calls had larger hyoids, a bone in the front of the neck that appears to act as an amplifier, but smaller testes. There was significant variation in hyoid size between howler species, but also between male and females within a species. The disparity tipped researchers off that something else was going on.Loudest in the Room Howler monkeys produce one of the loudest vocalizations of any animal on the planet, and males use their voices to shout down competitors, attract mates and rope off their territory. But a closer look at the hyoids reveals an unexpected level of variation in between sizes. “If you thought of the howls as only being for communication it would seem you would have more similarity in size between their hyoid bones,” says senior author Leslie Knapp, professor and chairperson of the anthropology department at the University of Utah. 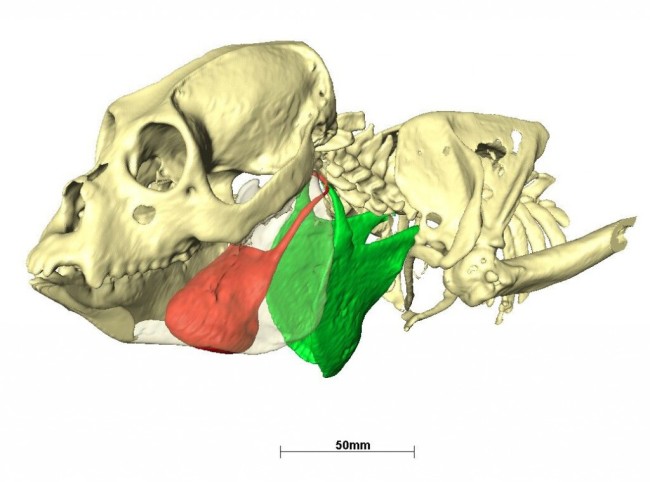 Researchers found a link between the size of a howler monkey's hyoid (red) and the size of their testes. (Credit: Jacob Dunn) Researchers used laser surface scanning to build 3-D anatomical models of hyoids from 255 male and female howler monkey specimens housed in various museums. They also analyzed the monkeys' group dynamics based on literature published on each of the species they studied. They discovered a negative correlation between the size of males' hyoids and the size of their testes, which points to the calls having a role in reproduction, not just communication and scaring away predators. “We think that there’s some kind of trade-off going on,” says Knapp. “It’s very difficult to grow a large hyoid and have enough energy to be able to produce a lot of sperm and have large testes that will allow you to produce lot of sperm if you’re a howler monkey. “This also suggests that if you have a larger hyoid you’re able to keep competitors away because they’re making a loud sound,” says Knapp. “But if you have a smaller hyoid and can’t make the loudest sound, you compete with sperm.” 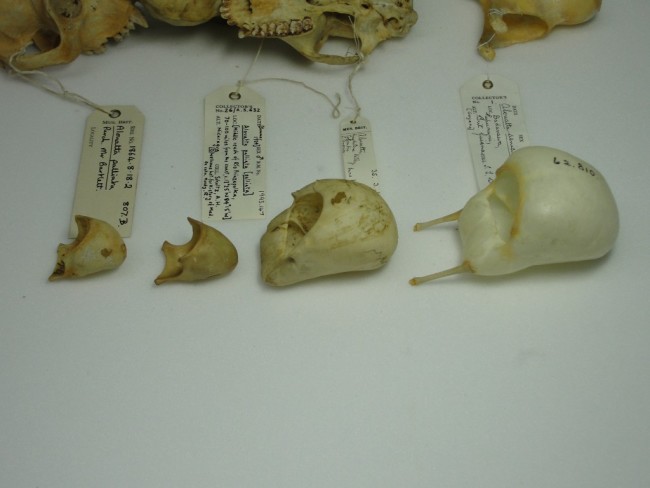 Howler monkey hyoid bones. (Credit: Jacob Dunn) Their hypothesis was further supported when they examined the social group structure between species. Species with large hyoids and small testes tended to have a harem arrangement, with one dominant male and several female monkeys forming a social group. In that arrangement, competition for genetic success occurred before actual mating took place. Species with smaller hyoids and larger testes had larger, more evenly-mixed groups. In those species, competition to fertilize an egg happened during, or even after, mating. For those males, having larger testes — and potentially faster or more sperm — could be the key to genetic longevity. 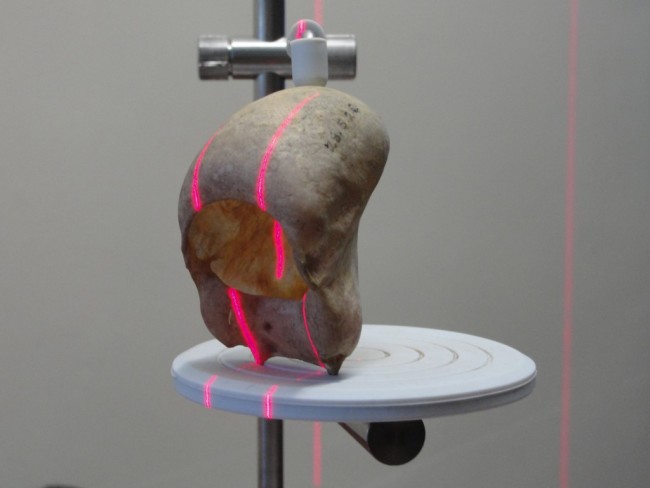 Using 3-D laser surface scanning to measure a howler monkey hyoid bone. (Credit: Jacob Dunn) “If they’ve got bigger testes, it’s a system that lets them try to have the better chance of fertilizing the egg,” says first author Jacob Dunn, a lecturer in human biology at the University of Cambridge. Researchers published their findings Thursday in the journal Current Biology. Evolution Unfolding Dunn says, like most studies, it’s not necessarily that the research team was interested in howler monkeys, but that howler monkeys served as a means to understand evolutionary processes. “To see under what circumstances different traits can evolve, to try to understand how, where and when different traits evolve that are important for communication and reproduction,” says Dunn. Howlers are a good system to model. They have a wide distribution, and variation, which is an important facet of studying evolutionary processes. “Variation is key to understanding evolution,” says Dunn. "When Darwin noticed the beaks of finches in the Galapagos varied from island to island you begin to ask yourself why. For us, it was not the fact they were howler monkeys, it’s why is there variation?”