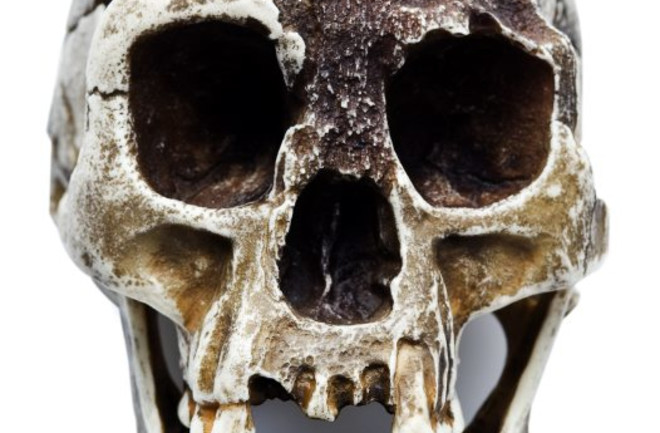 Indonesia's Flores Island, once home to diminutive Homo floresiensis (skull cast shown above), also has modern pygmy populations. Researchers sequenced DNA from some of the individuals to determine if they might be descended from the archaic "hobbit." (Credit: Australian Museum) From the home of the "hobbit" (and I'm not talking about The Shire): Researchers have sequenced DNA from modern pygmy populations on the Indonesian island of Flores to determine whether they are descended from Homo floresiensis, a famously small-statured archaic human living there as recently as 50,000 years ago. When diminutive H. floresiensis was first described in 2004, Peter Jackson's cinematic take on the Lord of the Rings was near peak popularity, so of course the new addition to our family tree was immediately nicknamed the "hobbit," after the sub-four-foot heroes of JRR Tolkien's fantasy world. Some skeptics suggested the individual's roughly 3'6" height was an anomaly, but the recent discovery of additional skeletal remains have confirmed the entire species was small in stature and on Flores much earlier than previously thought. Near Liang Bua cave, the first H. floresiensis site, the village of Rampasasa happens to be home to a modern pygmy population averaging about 4'9". The geographic coincidence has inspired a slew of studies (and academic brawls) over whether the Rampasasa pygmies descended from the earlier Liang Bua residents, as well as a bit of a tourist industry in the village and surrounding area. (It's worth remembering that a smaller stature is not the only trait that separates H. floresiensis from our own species. The Flores hominin had a significantly smaller brain and proportionately larger teeth and feet, lacked a chin and had a different shoulder structure, among other unique traits.) While both the tourist trade and the academic tiffs have, at times, gotten ugly, the central question about H. floresiensis has remained unanswered: Just where does this unusual member of the genus Homo fit in our family tree? Honey, I Shrunk The Kids Answering that question directly would require ancient DNA (aDNA) from one of the hobbit bones. Although techniques for aDNA extraction and sequencing have advanced tremendously in the last half-decade, DNA still degrades over time, especially in hot, humid environments. The chances of any aDNA being preserved in the remains of H. floresiensis are slim. Researchers can, however, use modern DNA to rule out certain scenarios, such as the notion that the Rampasasa folks descended from H. floresiensis. Scientists collected DNA samples from 32 Rampasasan adults and generated a kind of reference library of the population's unique genetic signatures. The team then sequenced the entire genomes of ten of the individuals. They compared the genomes to more than 2,500 others from populations worldwide as well as previously analyzed genetic signatures of our closest known hominin kin, the Neanderthals and the Denisovans. Based on their analysis, the researchers concluded that the Rampasasa villagers traced their ancestry back to an older Oceania population that had more recently mixed and mingled with East Asians. Oceanic populations tend to have a higher percentage of both Neanderthal and Denisovan DNA than other modern groups, and yes, the team found evidence of both archaic species in the Rampasasan DNA. Specifically, the Flores pygmies had about 0.8 percent Denisovan ancestry, which is more than seen in other Southeast Asian island populations, but less than in Oceanic genomes from individuals with no East Asian ancestry. Their Neanderthal ancestry had a similar profile, basically exactly what you would expect to find in people primarily of Oceanic heritage with more recent East Asian admixture. What the researchers didn't find was any genetic fingerprint from any unknown archaic hominins. Even though there is no aDNA from H. floresiensis to compare the Rampasasan genomes to, had the villagers descended from the hobbit, their DNA would have included some unidentifiable ancient signatures, like a crime scene fingerprint from someone not in the system. Instead, the team determined that the short stature of the Rampasasa population was the result of strong genetic selection for decreased size. It appears to be a classic case of insular dwarfism: Organisms, especially mammals, can undergo a reduction in size over generations because a smaller body proves to be an advantage in an environment of limited resources. Stegodon florensis insularis is a well-known example of this kind of downsizing: Fossils show the elephant relative decreasing in size over time to pygmy proportions. This subspecies of Stegodon hails from Flores as well. Of course, another example of insular dwarfism is H. floresiensis, the authors point out, demonstrating two entirely separate hominin lineages (the hobbits and the modern pygmy H. sapiens of Rampasasa) who got shorted. Fun fact: while Flores seems to be a place that shrinks hominins and proboscideans alike, the island is also home to giant rats. Although...rodents of unusual size? I don't think they exist. The open-access research appears today in Science.