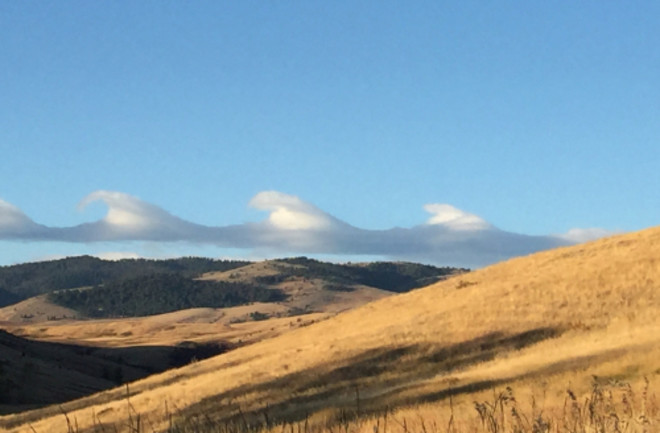 Meteorology, the study of the atmosphere, including weather and climate,  dates back to ancient times. In fact, In 340 B.C.E. Aristotle titled his book on weather Meteorologica. Throughout history, notable scientists such as Galilei Galileo, Blaise Pascal, Edmund Halley and Benjamin Franklin all studied aspects of meteorology. Nature produces unusual weather conditions, including thundersnow, fallstreak holes, sunshowers and many others. Here are five incredible weather phenomena.

Pronounced deh-rey-cho, this incredible weather phenomenon is a long-lasting wind storm that involves thunderstorms and travels in a straight line. To qualify as a derecho, wind gusts must reach 58 mph and wind damage must cover an area exceeding 250 miles. There are progressive derechos, which form in warm weather and occur in the northern plains and upper midwest region of the county, and cool weather serial Derechos — which can happen anywhere from East Texas throughout the Southeast United States. In August 2020, there was a record- breaking Derecho in the Midwest, considered the costliest thunderstorm in U.S. history. It lasted 14 hours, traveled 770 miles and caused more than $7.5 billion in damages. With winds reaching 140 mph, it knocked out power to half a million Iowans.

These incredible weather phenomenon look like small tornados comprised of dust and dirt. While tornados form from clouds and extend to the ground, a dust devil starts from a whirlwind at ground level. Dust devils are created when hot air near the ground surface rapidly rises into the cool air above it. This results in an updraft that can start to rotate under certain conditions. Although they’re usually less than 100 feet tall, they can rise as high as several thousand feet. Unlike tornadoes, dust devils usually aren’t damaging, but can have winds of up to 60 mph. They typically occur in dry climates, like the Southwest — and primarily in clear weather. Check out this impressive dust devil that happened in Japan.

A fire tornado also called a firenado, is just what it sounds like — a twisting funnel of fire. Smaller ones are called fire whirls, while firenadoes are between 100 and 1,000 feet in diameter and reach speeds of 90 mph. Although they sound like something from a horror movie, firenadoes are real but very rare. For example, during the California wildfires, blazes have become so extreme the flames can form into a spinning vortex. In 1923, a devastating fire tornado killed almost 40,000 in 15 minutes during the Great Kanto Earthquake. Hopefully, you’ll never find yourself anywhere near this incredible weather phenomena, but here’s a helpful video with tips on how to survive.

Named after physicists Lord Kelvin and Hermann von Helmholtz, these clouds look like breaking waves. Kelvin-Helmholtz clouds are created when a dense, warm layer of air overlaps a colder, denser layer while they’re moving at different speeds (called wind shear). These are found above 16,500 feet in altitude, and are an aviation concern due to the burst of moderate to severe turbulence they can cause. The Kelvin-Helmholtz instability was discovered when they were studying fluid dynamics — and can be found not only in clouds, but in the sun’s corona, Jupiter’s Red Spot, and Saturn’s Bands. It’s believed that Vincent van Gogh may have seen these clouds while in the South of France, which was possibly his inspiration for “The Starry Night” painting.

Also called snow rollers, these rolling balls of snow often resemble the familiar shape of donuts. However, there are times they don’t have a hole in the middle. Sometimes, they’re more spiral-shaped, which occurs when they collapse in on themselves. In order for snow donuts to form, moisture, temperature, wind and snow conditions must be just right. This means winds must be strong enough to push snow donuts along, but not so intense that they destroy them. Another aspect is that there needs to be a layer of light snow on top of a layer of ice. Although wind is an integral part of their formation, snow donuts also gain size by rolling downhill. Usually found in North American prairies and remote areas of Northern Europe, they can be as small as a tennis ball or reach diameters of a couple of feet. Watch these snow donuts captured on video.