Fish Raise Their Voices to Shout Over Noise 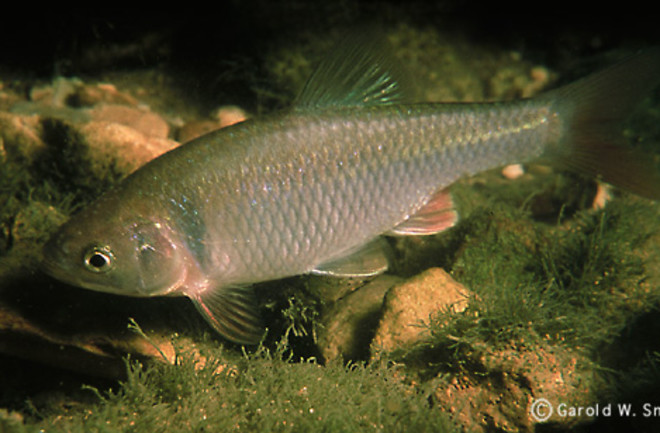 Cyprinella lutrensis, or red shiner, is a cousin of the black shiner. Every day, thousands of cars and trucks rumble across bridges all over the U.S. Their drivers probably don’t give much thought to the fish swimming in the rivers, lakes or bays below. But the fish notice them: They can hear those noisy engines passing overhead, and according to a new study, they are having to shout to communicate over the din. The effects of sonar and other human-made sounds on the communication of marine mammals such as whales and dolphins is well documented. But fish “talk” too – so far, researchers have identified about 800 different species of fish that use vocal signals. One of them is the blacktail shiner, which lives in parts of the Southeast, Midwest and in Texas. Dan Holt, a fisheries biologist at Auburn University in Alabama, wondered how the shiner responds to the loud traffic on bridges in the area. “You don’t hear much about freshwater systems,” he says. “But I drive over three or four bridges just coming to work, and a lot of times, we’re out collecting data by bridges, and we hear that noise. This fish is exposed to a lot of different types of sounds -- boat traffic, 18-wheelers, lots of bridge noise,” he says.

Holt and his co-researcher, Carol Johnston, wanted to find out if the blacktail shiner communicates differently in noisy areas. They knew that male shiners “purr” to attract potential mates and “pop” to fend off competitors. Would they move closer to one another, Holt and Johnston wondered, so they could be heard more easily? Would they repeat themselves? Or would they just “talk” louder, the way people shout over the music at a rock concert? For their initial study, published in the April issue of Behavioral Ecology – which Holt says is the first to examine a fish’s response to elevated noise levels – the researchers exposed the fish to white noise, a common method for testing hearing. They found that the fish simply turn up the volume. “This is the first fish in which it’s been found,” Holt says. But blacktail shiners don’t pump up the volume by very much, and it’s unclear whether they can still communicate effectively in noisy environments, he adds. Holt and his team are now studying the fish in their natural environment to find out whether traffic noise is interfering with mating or other behaviors. After that, the next step will be to study how other types of fish respond to elevated sound levels, he adds. “There are a lot of fish out there that make sounds, especially in these small freshwater streams,” he says. “A lot of questions remain to be answered.”

Across “the pond” in England, another team of researchers studying acoustic communication warn that noise interference can have tragic consequences for species that rely on verbal signals for survival. A review study by a team led by biologist Andrew Radford of the University of Bristol, published in the same journal last month, looked at previous research on the responses of birds, amphibians and marine mammals and suggested that fish, which account for more than half the world’s vertebrate species but whose responses to noise are not as well understood, may be adversely affected by noise and should be studied more closely. Since fish make up more than half of the world’s vertebrates and provide the main source of protein for one billion people, the British researchers note, studying their response to a noisy environment will be important for people too. The human population is expected increase by 1-2 billion by 2050. “The world is getting noisier,” Holt says. “It could have a lot of impacts.”