First, They Groom; Then, They Share Blood — How Vampire Bats Bond With Strangers

Sharing meals is an essential part of vampire bat life. The question is, who are they willing to share food with? 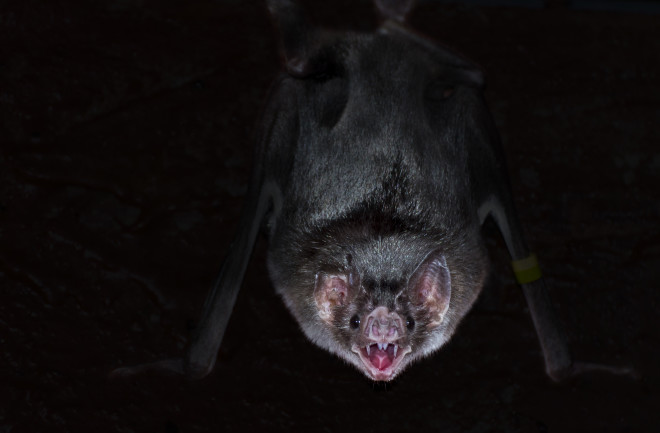 As vampire bats get to know each other, they might start with a little mutual grooming. After nibbling at each other’s fur, there’s a chance they’ll take their relationship to the next level: regurgitating blood meals into each other’s mouths.

Gerald Carter, who documented this slow relationship evolution, had a feeling he would see this happen. Bats often meet bats they’re not related to and end up sharing food with one another, says the behavioral ecologist at the Ohio State University. “These relationships have to come from somewhere.”

His observations, published in Current Biology, mark one of the first times researchers have seen animals build a close relationship after being complete strangers. Both grooming and sharing of food are ways that bats help one another out. There’s a bigger risk involved with feeding another — after all, that’s nutrition one bat is giving up for the other’s sake. Transitioning into this higher-stakes behavior indicates that bats, and maybe other species, can ramp up relationships over time.

How Does Friendship Start?

Observing two strangers build a friendship in the wild would be difficult, Carter says. Luckily, vampire bats lend themselves to realistic lab studies. They spend all their time in the wild cooped up in small places, which is easy to simulate indoors. And while they have fairly fluid group dynamics and often fly or roost with a rotating cast of bats, females sometimes move into new social groups where they don’t know many of their new companions. In other words, they have to build new connections.

Vampire bats also occasionally need to feed each other. The nighttime predators seek out large mammals for blood meals, and some adults will occasionally fail to get a meal at night. Babies are often deprived, too: Ones under 2 years of age often miss a third of their nightly meals, Carter says. Because stranger bats have to build relationships before sharing meals, Carter decided to watch how this happens in the lab.

Carter brought adult female bats from two sites in Panama to the lab and introduced them to one another. In some cases, he paired members of the two locations one-on-one. In others, he put together small groups of bats from each party. To simulate their occasional need for feeding from other bats, Carter deprived a few of food — and then watched to see what happened.

He observed that, if given the choice, bats would choose to groom and feed bats they already knew. But many were willing to groom someone new. Of all the conceivable new relationships the mingled bats could build, half of them developed fur-combing habits. And in about 10 percent of all possible new relationships, the bats moved on to meal sharing.

“I was excited when I saw the first food sharing,” Carter says. He tried to do this same study a few years ago with a smaller group of bats and over less time, but ran out of funding and had to wrap it up before seeing any blood sharing. This time, over a year’s worth of observations revealed the relationships the bats are willing to build as they get to know each other.

Researchers first proposed this slow relationship ramp-up theory a few decades ago, Carter says. Animals might build connections with strangers by first risking very little, and if that is reciprocated, risking a little more of their resources. This new study backs up that theory in real life.

Carter has even shown that lab friendships last in the wild. And now that the behavior is documented in vampire bats, it’s possible this same theory could explain how other species get to know strangers.

Next, Carter wants to track even more subtle signs of bat friendship: their willingness to roost next to strangers. Maybe inching closer to one another in their confined spaces is a precursor to grooming — and an early sign of a budding friendship.