Azolla filiculoides is an aquatic fern that has been used as natural fertilizer in rice paddies for centuries. 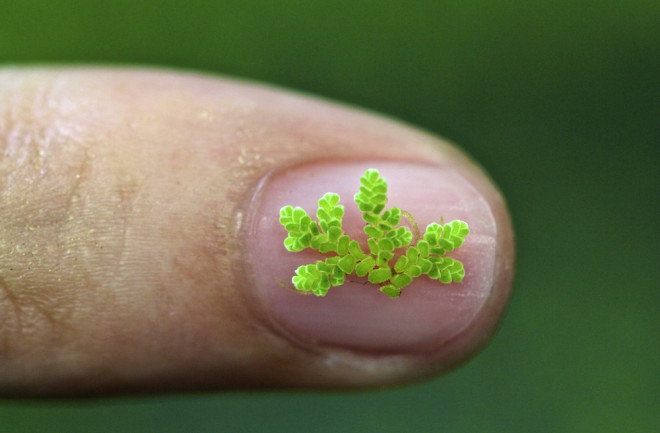 When you’re a tiny fern in a big, cruel world, how do you survive insect attacks and stay fed? Teaming up with bacteria might do the trick! Biologists have sequenced the genomes of ferns for the first time, and the two species they’ve started with are already revealing trade secrets, adding to our understanding of how partnering with bacteria helps them repel hungry insects and get the nutritious nitrogen they need. The ferns’ genomes also fill gaps in biologists’ understanding of the evolutionary history of the plant kingdom.

Of the major plant lineages, ferns were the only ones without any genomes sequenced until now, even though they include up to a whopping 15,000 species. Fay-Wei Li, a plant scientist and self-proclaimed fern enthusiast at the Boyce Thompson Institute and Cornell University, led the study published today in Nature Plants to sequence the genomes of two fern species — Azolla filiculoides and Salvinia cucullata.

A Tiny Fern with Big Impact

Though it’s little, the tiny fern Azolla may have changed the world 50 million years ago. Fossil records from the Arctic suggest that these fast-growing, carbon-sequestering ferns removed enough carbon dioxide from Earth’s atmosphere to cool the then-greenhouse globe and allow today’s polar ice caps to form.

In more recent Earth history, rice farmers in Asia have been using Azolla as a natural fertilizer for over 1,000 years. Nostoc azollae, a cyanobacterium species that lives inside Azolla leaves, captures nitrogen from the air and converts it into a form that the ferns — and rice plants — can use. Many plants have symbiotic relationships with the bacteria living inside them, but Azolla’s partnership with Nostoc is unique because the bacterium lives inside the fern for its whole life and transfers from parent to child when Azolla reproduces. It’s a microbial inheritance that most plants don’t get — they must start fresh with bacteria from the environment. Evidence hinted that the Azolla fern and its cyanobacterium partner might share a long evolutionary past together. Unraveling the details of their evolutionary history was one reason Li and his team wanted to sequence the Azolla genome.

According to Li, the lack of fern genomes has been a serious limitation in studying plant evolution. “If you want to understand the origin of seeds, the origin of flowers, you also have to study the plants that don’t produce flowers and don’t produce seeds, and those would be the ferns,” Li says. “From an evolutionary biology point of view, having a representative from all branches in the tree of life is very important.”

Ferns may have been overlooked partly because they have a reputation for massive genomes that would be expensive to sequence — the average fern has about four times the genetic information of a human — and because the benefits of sequencing fern genomes is not immediately obvious compared to sequencing the genomes of other plants, like agricultural crops. Li’s team struggled to get an Azolla genome project funded through federal agencies. So, four years ago, they turned to another potential resource — crowdfunding.

“I saw our colleagues doing some raising through online platforms and we thought, ‘Hey, why don’t we give it a try,’ ” Li says. Because of Azolla’s unique symbiosis with cyanobacteria, its long history in growing rice, and its broader potential in sustainable agriculture, Li thought this project could garner public interest.

The crowdfunding effort was a great success. 123 individuals backed the project, and the campaign got the attention of the Beijing Genomics Institute, which offered to do the genome-sequencing part of the project for free. Thanks to the outpouring of support, Li’s team was even able to add a second fern — Salvinia — to the project. The team has made the genomes of both ferns available online for any researchers to use.

Li’s team has uncovered a wealth of insights from the two fern genomes. On the plant evolution front, they found evidence that some proteins used for creating seeds existed in seedless plants before the plant family tree branched to form the group that would become seed-bearing plants. This could mean seed-bearing plants evolved mostly by adapting existing proteins for new purposes rather than inventing new proteins for new jobs. Comparing the new Azolla genome with the previously-sequenced Nostoc genome confirms that the fern and the cyanobacterium have been partners for as long as 100 million years, evolving and branching into new species together. From experiments with the fern’s genome, Li’s team found that the cyanobacterium’s ability to capture nitrogen from air keeps the fern nourished when other nitrogen sources aren’t available.

An unexpected discovery came from the genome of Salvinia, the second fern. Ferns have proteins that make them more resistant to insects than flowering plants, but biologists didn’t know where they came from. Li’s team studied the fern genomes to track down the origin of the natural pesticides and found evidence that in Salvinia, the pesticide protein might have come from bacteria rather than from plant ancestors. Transferring genes between species is fairly common among bacteria (this is what makes bacteria so good at resisting antibiotics) but rare in more complex life, like plants.

Discovering the details of the fern-bacteria teamwork was possible because of human teamwork. Li emphasizes that this study was a big collaborative effort — the journal article lists 42 authors and acknowledges the 123 backers who supported the project. “I’m super excited that we were able to carry this genome from the start to finish, and with support from crowdfunding, from the general public,” Li says. “We are doing the genome for the people, supported by the people. That’s kind of a nice feeling.”