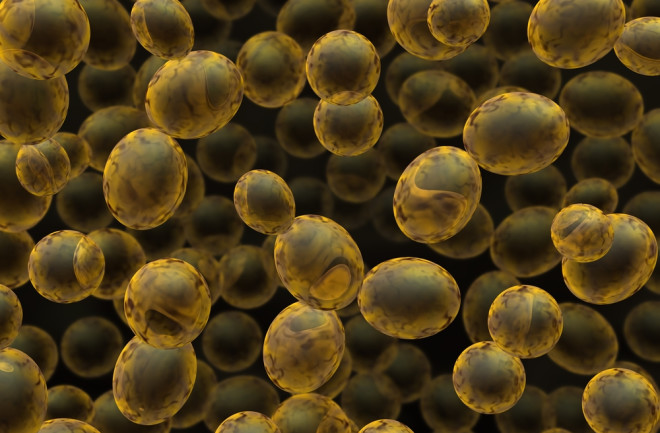 Scientists have synthesized one of the 16 chromosomes in baker's yeast. Image credit: Knorre/shutterstock In a significant step forward for synthetic biology, researchers have built a synthetic yeast chromosome---the first ever from a eukaryotic cell. This could help geneticists better understand how genomes work and stretch the existing limits of synthetic biology to make novel medications, more efficient biofuels and perhaps even better beer. Unlike prokaryotic cells, such as bacteria, which just have a jumble of DNA in their middles, eukaryotic cells contain a nucleus and a much more complicated chromosome-based DNA arrangement. These cells make up all more complex life, including animals and plants. Researchers have previously synthesized bacterial DNA, but this is the first time they've been able to synthesize the larger and more complicated DNA of a eukaryote. The chromosome in question belongs to good ol' baker's yeast, which is at the heart of many a synthetic biology experiment. The researchers focused on one of the yeast's 16 chromosomes: Number 3, which controls mating and genetic change.

In creating their synthetic version, researchers made 50,000 changes to the chromosome. They took out "junk DNA," which doesn't code for proteins, and "jumping DNA," whose erratic movement often triggers mutations. And to really hone in on the yeast's growth, they also ixnayed tens of thousands of repeated base pairs that weren't involved in reproduction. Many a computer and undergraduate researcher were employed to build and connect all 273,871 basepairs. Then they put this designer yeast chromosome to the test. They constructed the idealized sequence they'd created, and then incorporated the chromosome into otherwise normal yeast cells. The cells' growth and behavior, in all but one case, were almost indistinguishable from normal yeast cells.

An illustration of the designer yeast chromosome. Image credit: Annaluru et al.  Then researchers took a little more liberty and started making changes to the chromosome, at sites they designed specifically to be manipulated. Through this, they found they could make the yeast grow faster or more slowly on command. They published their results today in Science.

Synthetic biologists have already been using baker's yeast to produce biofuels, hepatitis B vaccines and antimalarial medications. Being able to build a synthetic version instead of having to manipulate an existing yeast could greatly expand the possibilities for these technologies. With the kind of directed control provided by a synthetic chromosome, applied to an entire genome, former barriers in synthetic biology may be easily surmountable. But, as is the case with many kinds of genetic research, the unknown is far greater than the known at this point. This chromosome is only one of yeast's 16. But teams of researchers around the world are already working on the other 15.