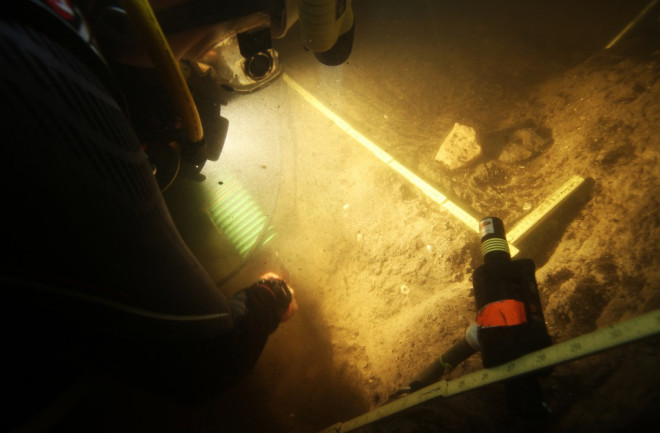 The challenging Page-Ladson archaeology site, the oldest evidence of humans in the southeastern U.S., is 30 feet underwater with zero visibility. Only a handful of archaeologists across the continent have the skills — and the fortitude — to do the careful, laser-guided excavation work. Credit: S. Joy, courtesy of CSFA. Out of murky water comes a clearer picture of when the Americas were populated. Numerous 14,550-year-old finds from 30 feet underwater in a Florida river represent the oldest archaeological site in the southeastern U.S. — and the latest direct challenge to one archaeo-camp's long-standing belief about when the first people arrived on the continent. The site yielded stone tools, including a knife-like cutting implement, and a mastodon tusk with cut marks that suggest it was butchered by humans eager to get at the highly nutritious tissue in the tusk's pulp cavity. Yum. The Page-Ladson site, in the Aucilla River near Tallahassee, was first excavated in the 1980s and '90s. Those early digs yielded some tools and the mastodon tusk, all dated to more than 14,000 years ago. Mainstream archaeologists at the time scoffed at the results because the prevailing theory — until fairly recently — was that the Americas were first settled around 13,000 years ago by the Clovis people, known from distinctively shaped tools and projectiles found at locations across much of the continent.

This is not a Clovis tool. Some 14,550 years old, this stone "knife" found at the Page-Ladson site does not have the distinctive, rather fancypantsed technique indicative of the Clovis culture. Credit: Image courtesy of CSFA Over the years, a handful of sites from Pennsylvania to Washington State, and as far south as Monte Verde, Chile, have yielded artifacts that predate Clovis in both age and technology. More recently, a growing number of genetic studies have established that the first people to arrive in the Americas came from Siberia via the now-submerged Beringia land bridge about 15,000 years ago. This latest round of excavations at Page-Ladson, conducted 2012-2014, yielded a biface stone knife and more robust dating which nailed an age of 14,550 years for the knife and other artifacts. Yet Pre-Clovis skeptics remain. "In the archaeological community, there is still terrific resistance to the idea that people were here before Clovis," said Michael Waters, director of Texas A&M's Center for the Study of the First Americans and a co-author of the new Page-Ladson paper published today in the open access journal Science Advances. During a press teleconference on Thursday, Waters and other team members, including co-principal investigator Jessi Halligan of Florida State University, spoke about the significance of the find, and the challenge of the blackwater dig site.

Without any natural light penetrating the water, the divers had to wear special lights strapped to cavers' helmets and use lasers to keep accurate records of their positions. While they marked out a typical excavation grid with strings, as they would do on land, they had to use a special suction system to remove particles as they were disturbed — otherwise the site would be like what Halligan called "working in a snow globe." Sediment was sucked up through hoses to the surface and then into floating screens to sift out any artifacts or bone fragments. "The Aucilla River is a blackwater river, stained by tannins to be nature's version of iced tea... And if it's been raining a lot it’s a very dark color," Halligan explained. "Most of the time when you're 30 feet down in the Page-Ladson site it is, as my dad would say, as dark as the inside of a cow." Or, perhaps, as dark as the inside of a mastodon.

A mastodon tusk from the Page-Ladson site has cut marks that suggest humans harvested tissue from its base for food. Credit: DC Fisher, Univ. Michigan Museum of Paleontology.

A Load of Dung

Something else found at the site: mastodon dung. Lots of it. More specifically, lots of spores that like to hang out in mastodon dung. That's an important clue to what was going on at the time because when there are lots of mastodons lumbering about, they leave lots of dung behind which creates a happy home for lots of spores. No mastodons, no dung, no spores. By analyzing the spores found in different radiocarbon-dated layers at the site, the researchers were able to determine that mastodons were common in the area for about 2,000 years after at least one of them got butchered by the Pre-Clovis hunter-gatherers at the Page-Ladson site. That tells us mastodons and humans overlapped territory for a fairly long time in the southeastern U.S. And that, my friends, could throw a pile of mastodon dung at the recent theory that mastodons and other American megafauna were already on the way out due to climate change before we humans, with our spears and arrows and atlatls, came over Beringia looking for dinner. At the same time, the fact that humans and megafauna co-existed for at least two millennia also suggests our species did not hunt the massive animals to extinction quite so quickly as some researchers argue. It's likely more of these sites will be found — Halligan and Waters both plan to continue the hunt this year.