Finally, a Home Where You Can Enjoy the Post-Apocalypse

When the above-ground world is suffering through some form of cataclysm, you'll be living it up in a hardened bunker under the Kansas soil.

Who said you can’t ride out the apocalypse in style? An entrepreneur based in Denver is offering wealthy but jittery home buyers a chance to make part of an abandoned missile silo their new home sweet home.

Larry Hall, a former software engineer who bought his 174-foot-deep hole in the ground from the government for $300,000 in 2008, plans to convert it to calamity-proof condos by 2013. The silo is one of 72 built across the country to deter a Soviet attack during the Cold War. Tucked into an empty stretch of rural Kansas, it once housed an Atlas F nuclear ballistic missile that could travel more than 7,000 miles. To withstand a Soviet strike, the silo’s concrete walls are up to nine feet thick. But it’s not some “dreary concrete basement hideaway,” Hall assures visitors to his website, survivalcondo.com. It’s a place to enjoy “the coolness of a missile base, the protection of a nuclear-hardened bunker, and the features of a luxury condo.”

Plans include an indoor spa, a movie theater, and a general store that won’t charge money—the purchase price includes five years of food per person. “If you just went to a storeroom and opened cartons for yourself, it’d be kind of depressing,” Hall says. This way, residents can enjoy underground living whether or not catastrophe strikes. At press time three 1,820-square-foot floors had sold for $2 million each. Interested parties include a dentist and a former Kansas City Chiefs football player. Should Armageddon break out, up to 70 people might have to live there in lockdown mode for years, so Hall screens buyers for violent felonies, health problems, and anger issues. And he’s enthusiastic about settling in himself. “When there’s no volcano erupting or martial law declared, it’s just a neat place to live.” 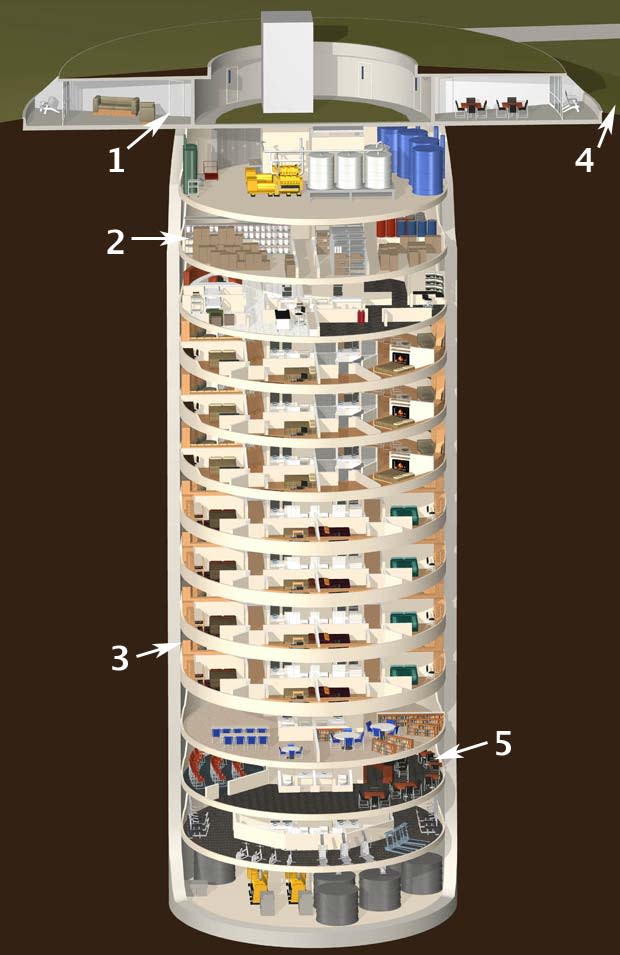 1. Silo capThe only thing visible aboveground is a concrete cap with blast-proof windows, built to withstand a shock wave traveling more than 2,000 miles an hour—about what a nuclear detonation would produce. “We could sit under here looking through bulletproof glass more than four inches thick and watch an F5 tornado go by,” Hall says.

2. FoodThe silo will store vegetables grown in soil-free trays and fish farmed in tanks, cultivated at a former launch-control site nearby. Connected to the silo by tunnel, the adjacent facility could supply food for up to 70 people indefinitely. Employees will normally tend the food, but in lockdown, residents will maintain food, water, and other necessities themselves.

3. Living spacesLuxury apartments will have brand-name kitchen appliances and jet Jacuzzis in master bedrooms. To compensate for the lack of a view, occupants can enjoy scenery of their choosing, be it San Francisco Bay or a tropical aquarium, on large, window-like HDTV panels. The “windows” dim in the evening to help make life seem at least semi-normal.

4. LockdownIf the world is destroyed, two deep wells and a rainwater collection system will feed purified water into the silo. A diesel generator and wind turbine will supply electricity. Air will be piped in through nuclear, biological, and chemical contaminant filters. The silo will be surrounded by electric fencing and security cameras and will have its own weapons arsenal.

5. EntertainmentSure, residents will have home TV and Internet access. But gathering places—including a movie theater, bar, general store, classroom, pool, and fitness center—will promote socializing and cooperation. Until the apocalypse, residents will be able to drive 35 miles into downtown Beloit, a town of 3,800 people, with restaurants, movie theaters, and an airport.