Fill Up Your Backyard Bird Feeder, Create a New Species 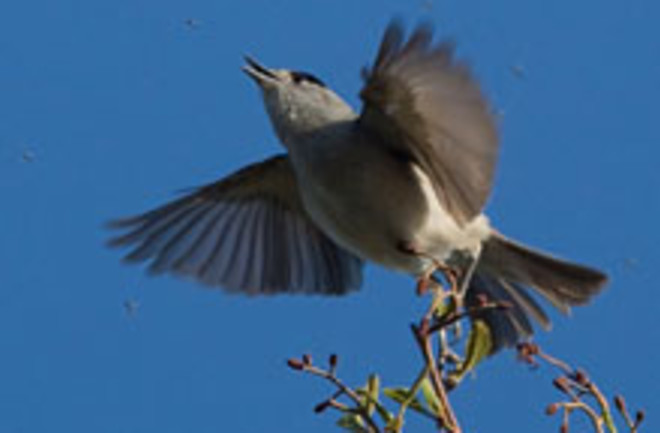 For one species to diverge into two, you typically need physical separation so that two populations can breed independently and evolve in different ways. That may happening to the blackcap warblers of Central Europe, Martin Schaefer says in a new Current Biologystudy, thanks to ... bird feeders. The birds are native to Germany and Austria, and migrate in the winter.

Blackcap migration routes are genetically determined, and the population studied by Schaefer has historically wintered in Spain. Those that flew north couldn’t find food in barren winter landscapes, and perished [Wired.com]

. That all changed, however, when British people became avian aficionados and set out bird feeders all over the place. Schaefer says that allowed blackcap warblers who have an unfortunate genetic urge to spend the winter in Britain, which are about 10 percent of the total population, to find sustenance rather than die off. In addition, the British migrants are taking advantage of the fact that their flight back to the central European breeding grounds is several hundred miles shorter than the trip back from Spain. The birds returning from Britain arrive about 10 days before the other birds, so they immediately begin breeding with each other. Thus, Schaefer says, the two groups have begun to split genetically, and the results can already be seen in the birds' anatomy. The southern migrants have pointed wings that give them speed over long flights, an their wide beaks are suited for the Spanish olives they eat.

The north-west migrants are fed by humans and have developed rounder wings - good for manoeuvrability but not for long-distance flight. They have also developed long, narrow bills that are less well adapted to eating fruits and berries than the south-west migrants. All of this has happened in fewer than 30 generations [Financial Times]

. Oceans, mountains, and other natural formations usually create the divide that allows for speciation. Not this time.