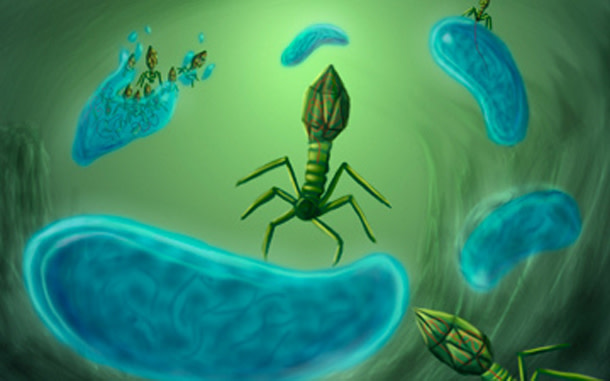 We are losing the war against infectious bacteria. They are becoming increasingly resistant to our antibiotics, and we have few new drugs in the pipeline. Worse still, bacteria can transfer genes between each other with great ease, so if one of them evolves to resist an antibiotic, its neighbours can pick up the same ability. But Matti Jalasvuori from the University of Jyvaskyla doesn’t see this microscopic arms-dealing as a problem. He sees it as a target. Usually, antibiotic-resistance genes are found on rings of DNA called plasmids, which sit outside a bacterium’s main genome. Bacteria can donate these plasmids to one another, via their version of sex. The plasmids are portable adaptations – by trading them, bacteria can rapidly respond to new threats. But they aren’t without their downsides. Plasmids can sometimes attract viruses. Bacteriophages (or “phages” for short) are viruses that infect and kill bacteria, and some of them specialise on those that carry plasmids. These bacteria may be able to resist antibiotics, but against the phages, their resistance is futile. Scientists have known about these plasmid-hunting phages for over four decades, but Jalasvuori has only now shown that they could prove useful to us. He found that the phages can dramatically reduce the level of antibiotic resistance in colonies of bacteria, by selectively assassinating the plasmid-carriers. Jalasvuori worked with two common gut bacteria – Escherichia coli and Salmonella enterica – both of which carried plasmids with antibiotic-resistance genes. In the absence of phages, all of the bacteria resisted antibiotics. When Jalasvuori added a phage called PRD1, that proportion fell to just 5% within 10 days. The bacteria adapted to the phage assault by jettisoning their plasmids, and with them, their antibiotic-resistance genes. These survivors were now resistant to phages, but the vast majority of them could once again be killed by antibiotics. The method isn’t perfect. A small proportion of the bacteria resisted both phages and antibiotics. However, Jalasvuori found that they also formed smaller colonies and had lost the ability to swap genes between one another. Their invincibility came at a substantial cost – compared to normal cells, they were hobbled eunuchs. Targeting plasmids is a clever strategy that uses the rapid evolution of bacteria against them. Rather than coming up with new weapons in an ever-escalating arms race, Jalasvuori made it too costly for bacteria to keep their defences. It’s like tackling gun crime by penalising gun ownership rather than developing better bullet-proof vests. However, Jalasvuori is refreshingly cautious about his work. He says, “There are a number of important caveats to these promising preliminary results.” For a start, his bacteria evolved under the threat of phages, but not antibiotics. If they had been exposed to both, there would almost certainly have been more double-resistant strains, which could have ultimately found ways of getting over their weaknesses. On top of that, not all plasmids are the same; some could potentially hide from threatening phages, and go on to harbour resistance genes. Finally, as Jalasvuori writes, “As with all test-tube studies, the relevance to natural environments is unclear.” It’s debatable whether this would ever lead to a practical way of dealing with drug-resistant microbes, but it’s certainly a lead. And with a problem as worrying as antibiotic resistance, every lead is an interesting one. Reference: Jalasvuori, Friman, Nieminen, Bamford and Buckling. 2011. Bacteriophage selection against a plasmid-encoded sex-apparatus leads to the loss of antibiotic resistance plasmids. Biology Letters http://dx.doi.org/10.1098/rsbl.2011.0384Image by PhylomonMore on phages: