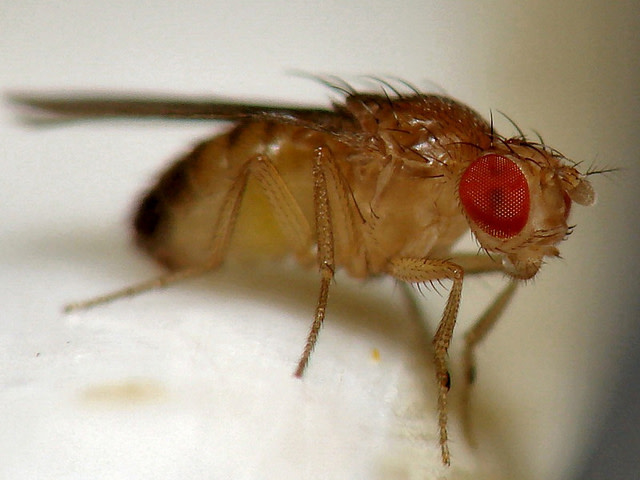 A word of advice to female fruit flies looking for a mate: it's not hard to catch the eye of a male Drosophila. He'll chase after almost anything that moves. Really—including a metal cube dabbed with pheromones. That may be embarrassing for the male, but it also shows scientists how a tiny-brained animal weighs information when making decisions. "We call the robot 'Flyatar,'" says University of Washington graduate student Sweta Agrawal, in reference to the movie Avatar. "It's a device that allows us to essentially 'become a fly' so we can interact with other flies and understand what they're doing." The robot she used to tempt male flies, though, was on the opposite end of the realism spectrum from that movie's motion-capture technology. Agrawal tested her flies in an arena with a circular track. The "Flyatar" was actually a small magnet, which Agrawal could remotely drive around the track at varying speeds. But at this tiny scale, the magnet manufacturer was limited to simple cubes and cylinders—not that that bothered male Drosophila. As long as the magnet was roughly fly-sized, the males were likely to chase it around the arena. It didn't matter if the bot was square or round, or how fast it was scurrying away from them. To their credit, males were less apt to chase after magnets that were much taller or wider than a real fly. If they were human males, in other words, they would have pursued a refrigerator but (usually) not a parade float. No matter what plain metal shape they were chasing, the flies tended to stop after about 10 seconds of the magnet ignoring them. "Flies are not as discriminating as I thought they would be," Agrawal says. "I later did an experiment for fun, where I put a ladybug in the arena in place of a magnet, and found that occasionally (though pretty rarely) males even tried courting the ladybug!" She's pretty sure these chases were courtship behavior, she adds, since males often extended one of their wings out to the side—a behavior Drosophila males only use when wooing a female. So the simple visual cue of a moving, fly-sized thing is enough to get a male's attention. But how do pheromones factor in? To find out, Agrawal painted the magnets with pheromones taken from male or female flies. Since it was tricky to get a consistent amount of pheromone on every robot, she also did experiments with actual, anesthetized male or female flies stuck on top of the magnets. She saw that adding the chemical signature of a real fly (which males could smell and maybe taste) didn't change the likelihood of a male chasing after the robot. But it did change the length of that chase—males pursued female-scented bots for twice as long as unscented ones. Male pheromones, or female pheromones from a different fly species, weren't interesting to them. Overall, it seems that males use visual cues when deciding whether to pursue a "female," and chemical cues (if they're available) to decide how long to keep up the chase. Agrawal says this is important because pheromones don't travel very far from the fly; at a distance, males need to use different sensory information. In the lab, she says, courtship arenas are typically much smaller than the arena she used, and research tends to focus on pheromones. But in the wild, a male fly may first spot a female from farther away. He'll have to decide immediately whether to give chase, and figure out later if he's looking at a lady fly or a refrigerator. It's normal for animals to use clues from all their available senses when searching for a mate, Agrawal says. "We've only just begun to scratch the surface" with flies; their senses of sound and touch are likely also important when pursuing females. None of this helps a female fly who's not interested in her male pursuer, of course. The good news is that she'll only have to run away for 10 seconds.