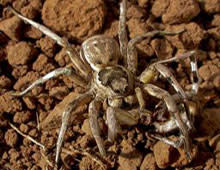 Cannibalistic female spiders who chow down on males do so to give their fertilized eggs a developmental boost, a new study suggests. Researchers found that those Mediterranean tarantulas who ate their suitors produced more offspring, and those spiderlings were stronger and bigger than the offspring of tarantulas that had stuck to more natural prey. The study turned up several surprises. The researchers watched the tarantulas' behavior in their natural environments, and saw that the female spiders didn't eat their mates--instead they waited until after they had mated, and then devoured the next unlucky suitor who came along.

Some other studies have suggested that males may sacrifice themselves for the sake of their offspring, but this study showed that, at least in this species of spider, the males are purely unlucky victims and only the babies benefit [Reuters].

The study, published in the journal PLoS ONE, is the first to examine the tarantulas' behavior in their everyday habitat, free from the unnatural stresses of a lab, and researchers say it discredits previous theories on the cause of the tarantulas' sexual cannibalism.

One theory had also held that females who ate males were simply more aggressive and perhaps better hunters -- but when the males were saved just in time, those females did not produce superior broods, suggesting that the male meals were an important source of nutrition [Reuters].

Sparse food could favor the evolution of cannibalism in the Lycosa tarantula spiders, Moya-Laraño says. They live in arid places, and male spiders amount to what he calls “high-quality prey,” a substantial nutritional boost [Science News].