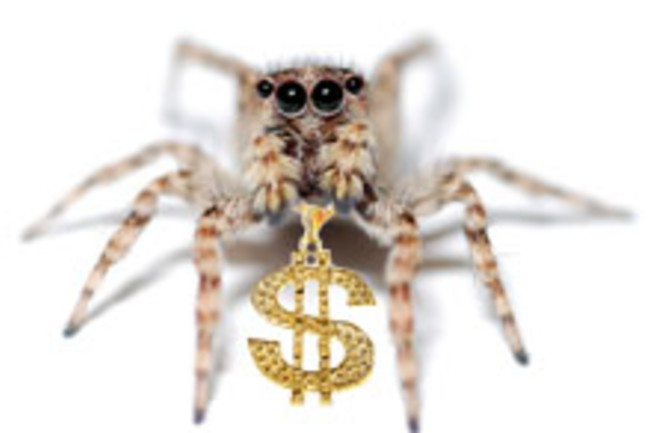 Male jumping spiders, known for their wicked dance moves (video), may have another trick for attracting mates: ultraviolet come-hither looks. The discovery, made by Jingjing Li from the Hubei University in China and published yesterday in Current Biology, is the first evidence that insects can detect UV-B rays. UV-A rays can be detected by many insects, birds, fish, and mammals, but UV-B rays are more energetic than UV-A rays (which makes them perfect for giving us cancer and sunburns), and it had been assumed that no animals had the right equipment for detecting them. But Li found evidence that a species of jumping spiders can not only detect UV-B rays—they find them sexy. First, Li discovered that both males and females of the species have patches on their backs and abdomens that reflect UV-B (but not UV-A), which are displayed during courtship. To determine whether these patches played a role in mating, Li put males and females in separate cages, each lined with different types of light filters. He found that when UV-B light was blocked, the females spent less time gawking at the males's amorous moves than when UV-A, or no light, was blocked. Li’s team doesn’t yet know how the spiders see UV-B or whether their eyes are somehow protected from UV damage. And it's still not completely clear how sexy UV-B is—the girls have UV-B-reflecting patches, too, and they never have to bust any moves to get a date. And further, as behavioral ecologist Eileen Hebets points out, the spiders weren't allowed to actually mate. But this is strong evidence that the spiders use the rays to communicate in some way, perhaps as a "secret language" to avoid predators with more limited eyesight. Imaged modified from iStockPhoto