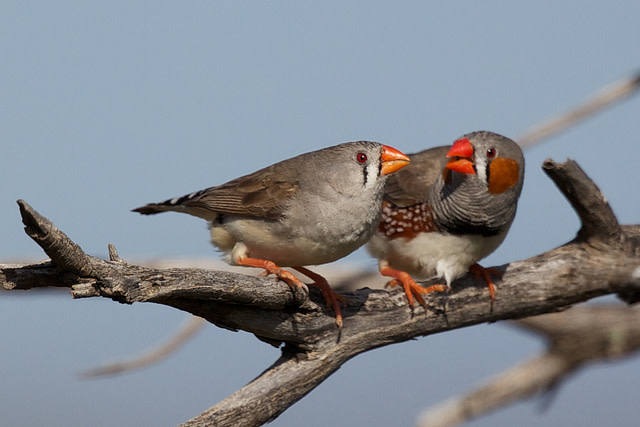 Humans aren't the only animals who know when something's the matter. The chirps of a stressed-out zebra finch may make his mate feel stressed too—even when she can't see him. It's a hint that a kind of empathy exists in birds. Zebra finches (Taeniopygia guttata) mate for life. They work together to find food, guard their nests, and raise their young. When they're apart, they call to each other to check in. Emilie Perez, a researcher at the University of Saint-Etienne in France, and her colleagues found in 2012 that the calls of stressed-out male zebra finches sound slightly different than usual. Not unlike a frantic human whose voice creeps higher and higher, a stressed male finch calls with a higher frequency. The researchers wondered if the mate of a stressed-out male notices this difference—and if so, how does she respond? Perez and her colleagues explored the question using 19 pairs of zebra finches from a captive colony at the university. First they separated partners briefly, letting the male and female hear but not see each other. They recorded the calls the male finch made. Another time, they separated the partners after sprinkling the male finch's birdseed with a little bit of the stress hormone corticosterone. Then they recorded the calls again. Since the researchers already knew stress raises the pitch of male bird calls, and wanted to test female birds using the clearest signals possible, they went through their recordings and picked out the 10 highest-frequency calls from stressed males. They also picked the 10 lowest-frequency calls from males that hadn't eaten any stress hormone. Then they played these recordings for female birds and observed their responses. Each female heard calls from her mate in a normal condition, calls from her mate when he was stressed, and unstressed calls from another male bird. In a second set of experiments, females also heard calls from stressed-out males who weren't their mates. Immediately after each test, the researchers drew blood from the female bird to measure her corticosterone level. Females had more of the stress hormone after hearing calls from their stressed-out mate, compared to hearing their mate under normal conditions. Hearing another male didn't have the same effect, whether that male was stressed or not. Eating corticosterone with their birdseed affected different males differently. Some made dramatically higher calls, while for other birds the change was more subtle. When the researchers looked at the acoustic features of the recordings, they found that certain changes in sound—such as a higher fundamental frequency, the lowest note in the call—specifically drove up female stress hormones. In videos of the experiments, the researchers also noticed behavioral changes in the female birds. When her mate was making a stressed-out call, a female was less likely to respond to him. (Insert your own spousal discord joke here.) Perez thinks these changes in both hormones and behavior mean that birds can match their partners' emotional states. She and her coauthors write that this is evidence for a basic kind of empathy. If this is true, it's not just cute—it's also practical. Evolutionarily, picking up stress cues from a partner could help a bird survive. When something is threatening one bird, its nearby mate is likely in danger too. Although the experiments have so far used male finches as callers and females as listeners, Perez says there's no reason their roles couldn't be swapped. "This is just my opinion," Perez says, "but I am 100 percent sure that we would see similar results." The researchers have already started testing female birds, and are finding that corticosterone changes the sound of their calls too. Perez believes the emotional matching probably goes both ways. "In this species, the pairbond is very strong, and partners collaborate in all their activities," she says. Matching each other's stress levels "could be a key for partners to be fully coordinated and synchronized."