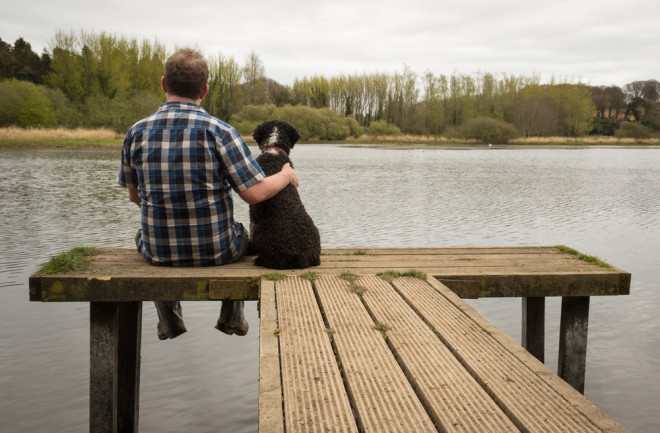 (Credit: Daz Stock/Shutterstock) A new study from researchers at the University of Lincoln in the United Kingdom suggests that dogs do a better job of recognizing when we’re happy or angry than previously thought. While everyone knows we can teach Rover to play fetch or roll over, these findings show that dogs have an innate ability to understand how we feel, likely a result of thousands of years of symbiotic living.

In the study, published Wednesday in Biology Letters, the researchers showed 17 domesticated dogs of various breeds a screen showing two faces: one happy and one angry. At the same time, the dogs heard a human speaking in an unfamiliar language and voicing either a positive or negative emotion. The experiment was then repeated with dog expressions and happy and angry barks. In both cases, the dogs looked significantly longer at the facial expressions that matched the emotional content of the sound they heard. That dogs paid more attention to an image corresponding to an emotional sound from both humans and dogs suggests that dogs have an intuitive understanding of our emotions and what they mean. Furthermore, when the dogs were presented with the same emotion expressed two different ways, they understood the connection between them. This means that the dogs were able to pull relevant information from two different sources and recognize that they were similar.

This experiment is the latest in a series of studies probing the intellectual and emotional capacities of dogs, says Stanley Coren, a professor emeritus in the department of psychology at the University of British Colombia, who wasn't involved in the study. He's also the author of multiple books on canine psychology. Previousstudies established that dogs recognize human expressions and vocalizations, and that they attach significance to them, Coren says. Such capabilities, he says, make perfect sense when considering that dogs have coexisted with humans for roughly 17,000 years, adapting and evolving along the way to live symbiotically with us. “We basically created a different species,” Coren says.

Like any relationship, effective communication is key to working together. And, at its core, emotion is fundamentally a means of communication. Our facial expressions and body movements give others a glimpse inside our heads, often whether we like it or not. For dogs to live with us, they had to learn to understand both our verbal and nonverbal messages — staying away from humans who looked angry, for example. The most important finding of this latest study, according to Coren, is that dogs can not only read emotions in human voices and faces — as was previously known — but they can combine these bits of information to gain a more complete idea of what we’re thinking. “What this does is it shows that dogs glue those things together and look for consistency in order to read the emotions. They’re responding like humans do,” Coren says.

Having access to more pieces of information gives dogs a better means of interpreting the contradictory nature of human communications — saying something mean with a smile, for example. Clearly, one of those cues must be false, indicating that this communication is perhaps not to be trusted. There is still plenty of room for error, of course. In human terms, the average dog is about as emotionally developed as a two-year-old, Coren says. Dogs understand basic emotions such as fear, anger, happiness and surprise, but more complex emotional states escape them. Weighty emotions such as guilt, pride and shame don’t really exist in a dog’s world. Maybe that’s why dogs don't mind peeing on the rug.