Fatal Crossing: The Lives That End at America's Desolate Border

Each year, hundreds of immigrants lose their lives while slipping across the border into Arizona’s Sonoran Desert. DNA forensics is piecing together the identities and stories of the dead. 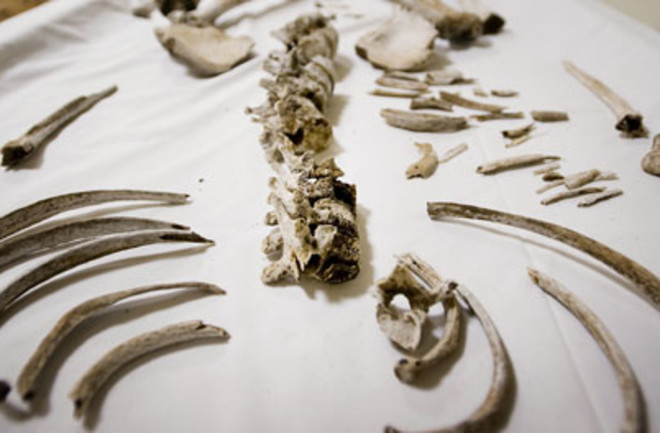 A partial skeleton of a presumed border crosser, photographed at the Pima County Medical Examiner's office in Tuscon, Arizona, was discovered in 2009 by a horseback rider in the nearby Avra Valley. Experts say this man probably died at least a year before his remains were found. | Matt Nager

The great Sonoran Desert stretches from deep in Mexico to the middle of Arizona, a dun landscape dotted with 20-foot-tall saguaro cacti and scraggly sagebrush. With its mind-blurring heat, this is not a place where you want to be left behind—but people are all the time. Ranchers, county sheriffs, and the government patrols that guard the United States–Mexico border find them with grim regularity, the bodies of illegal immigrants who slipped across the border but did not survive the journey on the other side. Remains not found for weeks or months may amount to a few decaying bones. Sometimes an animal drags the body off, or a person strips down under the onslaught of the heat, leaving behind nothing more than a pair of worn shoes and a faded shirt.

More than 200 bodies a year turn up in the Sonoran, a number that has increased over the past decade as immigrants avoid urban areas and attempt to reach the United States by more remote routes, often through Arizona. After crossing the border, they sometimes walk 70 miles or more to reach a safe point of entry, often traveling without water and in temperatures that can reach 110 degrees Fahrenheit.

Authorities suspect that the bodies turning up inside our borders are migrants from Mexico or Central America. Their guides, popularly known as coyotes, may have abandoned them in the desert if they fell behind or got sick. “It’s hard to know what happened,” says Lori Baker, a molecular anthropologist at Baylor University in Waco, Texas, and one of the leading experts in identifying the remains. “Some coyotes just take their fees, which can be $1,500 or more, and then leave the people in the desert. Sometimes they’re dead before they even get to the border.”

For Baker, the granddaughter of a migrant worker, the issue is not whether America’s immigration laws should be tighter or looser; the issue is how to respond to the tragedy and loss. “I can’t imagine anyone’s begrudging a family an explanation of what happened to their loved one,” she says. “How do you say, ‘Sorry, I don’t want you to find out what happened to your 15-year-old son.’”

Eight years ago, Baker realized she had the background to help. As a graduate student, she had begun analyzing and sequencing genes in 1995. Later, as a postdoc at the University of Tennessee, she developed a new method for extracting DNA from hair. Her primary goal was to study the movement of ancient peoples across the Americas, but she also consulted for the Truth and Reconciliation Commission, formed to investigate the disappearances and other political atrocities that shook Peru during the 1980s and 1990s. Baker was part of a team teaching prosecutors how to handle evidence. “I was there with quite a few international forensic scientists, and we were talking one evening about what was going on in our home countries,” she recalls. “I said we had immigrants trying to enter illegally, and quite a number died along our southern border, but it was very hard to identify them or send the remains back to their families. Everyone in the room volunteered to come to the United States to help.”

After that 2002 trip, Baker, by then working at Baylor, decided to get involved. She tapped her colleagues’ expertise and, with Erich Baker—a Baylor bioinformatics expert who is also her husband—launched Reuniting Families, a foundation that identifies migrant remains found inside the southern U.S. border. There was an enormous backlog. In 2002, when Baker set up shop, the system in place was so porous that identities were never attached to some 44 percent of the remains.

Baker’s group took a two-pronged approach: setting up a database to improve the flow of information, and bringing modern DNA forensics to bear. On the informatics end, Reuniting Families worked with the Mexican government and some of its consulate offices to integrate missing-persons reports from several databases into a single system. The migrants who die in the Sonoran frequently come from poor families “who may not have access to the Internet or even a telephone,” Baker says, but they do usually contact authorities. By collating the specifics of height, distinguishing features like tattoos, and a description of a missing person’s clothing, investigators often can make a tentative ID soon after a body is found. But only through dental and medical X-rays, finger­prints, or DNA can they be certain.

Bruce Anderson, a forensic anthropologist at the Pima County Medical Examiner’s office, was already on the job—and getting overwhelmed by the steady flow of bodies and clothing and bones—when Reuniting Families was formed. His office was handling medical and dental records and fingerprints, but DNA analysis would add a crucial missing piece. After Baker got started, Anderson quickly reached out.

Today, as soon as Anderson sends Baker a bone, she begins the arduous process of extracting DNA. First a sample is purified under a sterile hood to eliminate contaminants, especially foreign DNA. Then Baker takes 250 milligrams of the bone (about 0.01 ounce), grinds it into a powder, and uses silica to separate all the other biomolecules from the pure DNA.

With her up-to-date equipment, Baker is usually able to isolate nuclear DNA, the genetic material inherited from both mother and father and unique to each individual. But about 10 percent of samples are so degraded that all she can recover is mitochondrial DNA, which is more abundant but less specific. Passed down through the mother alone, mitochondrial DNA cannot distinguish an individual, though it can identify someone as part of a group. When Anderson has a bone sample from someone he thinks he can identify but wants to know for sure, he asks the consulate to send saliva or blood samples from that person’s family for Baker to analyze. But even after all that effort, half of the hundreds of cases Baker works on each year end without resolution.

To improve the odds of recovering an identity, Baker has looked to other techniques. One of them involves using her skills as a forensic anthropologist to make a genetic map of Mexico so that even heavily degraded genetic remains can be compared with regional populations to get an idea of where they came from. In a complementary project, forensic anthropologist Kate Spradley of Texas State University is digitizing the shapes of skulls of the dead to get a better grasp of which regions correspond to which specific shapes. Investigators tend to lump most remains into the broad umbrella group of “Hispanic,” but Baker says that in fact, skulls from Mexico, Guatemala, and Peru are all different.

When combined in a database, this kind of information is shedding light on the living as well as the dead. Baker has found that an overwhelming 94 percent of the recovered remains belong to indigenous people for whom Spanish is a second language. Indigenous Amerindians may be more likely to head north because they often live in relative poverty in their native countries, she says; they also may experience prejudice because of their darker skin. These are the direct descendants of the people who settled the Americas after the last Ice Age—the same people Baker sometimes studies in her work with ancient bones.

“I’d rather do DNA extractions on a 17,000-year-old bone because there’s no emotional attachment,” Baker comments. Not long after establishing Reuniting Families, she considered dropping her effort to name the border dead. Then came the case of Rosa Cano in June 2003. A single mother, she had set out to find work in the States. When weeks went by without a word, her mother (also named Rosa) contacted authorities, who put her in touch with Baker. It turned out that DNA from the bones Anderson sent to Baker matched a DNA sample from the family. “I had just found out I was pregnant with my first child,” Baker remembers, “and trying to imagine this mother finding out that her own child had died? It broke my heart.”

Months later, Baker’s friends visited Cano on Baker’s behalf. “Rosa went running up to them,” she says. “She thought my friend was me and started hugging her, saying, ‘Thank you, doctera. Thank you, doctera.’” The woman sent Baker a traditional Mayan dress that she had made by hand. Rosa said that knowing what happened to her daughter made the loss easier to deal with. “The hope eats you alive every day,” she told Baker’s friend. Baker decided to carry on.

Like so many others dealing with poverty, the younger Rosa Cano accepted the risks. “It used to be that mostly men in their twenties and early thirties were crossing the border to work. They would come for six months or a year and then go home for a while,” Baker says. “Now it’s so difficult that entire families—the grandparents, even infants—make the trip.” And if one family member makes it across the border, then others are likely to follow.

Anderson recalls the story of one family from El Salvador. The mother, Sonia, and father, Santos, crossed the border and found work. The mother saved money and then sent for her children, arranging for trusted friends to travel with them and hiring a coyote as a guide. But during the blistering walk through the desert, her daughter, Josseline, fell ill and could not keep up. The coyote said the group had to go ahead or miss its ride, leaving Josseline behind to wait for a patrol. There was no patrol, and Josseline was never heard from again.

When Josseline’s brother arrived without her, the family contacted officials. Ultimately a search volunteer spotted a pair of bright green tennis shoes, much like those Josseline was said to have worn, just a few feet away from the body of a teenage girl. With the help of DNA testing, Anderson was able to confirm the match. The searchers were far too late to save Josseline’s life, but at least science was able to recover her name.