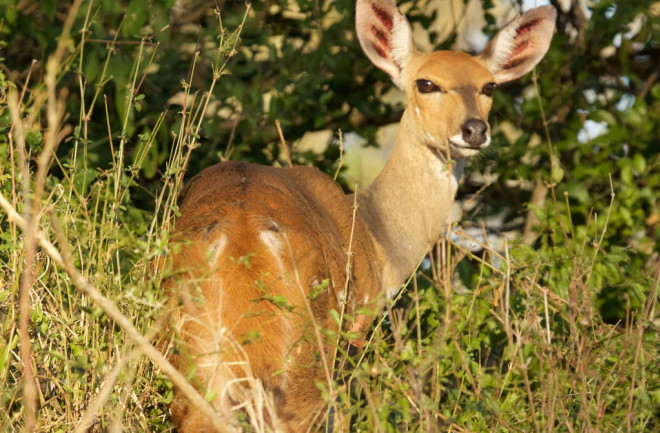 A bushbuck hides out in a thicket. Scientists say that the animals have become less fearful in recent years without predators, and started grazing in places they'd normally never venture. (Credit: Robert M. Pringle) In the savannah woodlands of Mozambique’s Gorongosa National Park stalks an animal that resembles a cross between a goat and a deer. The antelopes known as bushbuck sport the white speckles, russet coats, and large eyes and ears of deer, but stand just two to three feet tall with a pair of dark, twisting horns that grow straight out of males’ heads. These secretive, forest-dwelling ungulates take cover from leopards, hyenas and wild dogs in the protection of trees and a network of escape trails. But since a civil war wiped out predators in the area, bushbuck have become fearless. The animals have boldly ventured beyond the safety of the woods into treeless grasslands to graze. Now researchers have discovered that they can send the antelope back to their wooded refuge by simulating predation with strategically placed predator urine and audio recordings. “The decline of large carnivore populations in Gorongosa disrupted the normal ecosystem ‘rules’,” said Justine Atkins, an ecologist at Princeton University in New Jersey, who led the new research. “But our predator simulation experiments lend support to the idea that restoration of apex predators to their natural ecosystems—or ‘rewilding’—can reestablish these indirect species interactions.”

Civil war raged in Mozambique for 15 years. The war ended in 1992, but stamped out more than 90 percent of large mammals. Herbivores like the bushbuck eventually recovered, but leopards, hyenas and wild dogs did not. By chance, Atkins and her team discovered the predators’ absence had emboldened bushbuck. As part of another project, the researchers were out in the park fitting bushbuck with GPS-enabled collars. As their name implies, bushbuck typically stick to thickets and dense forests, but the researchers realized some were wandering into the open plains. “We thought that was pretty weird,” said Rob Pringle, an ecologist at Princeton University who led the research with Atkins. “We started calling them ‘plainsbuck,’ because ‘bushbuck’ didn’t seem so appropriate for these particular individuals.”

The researchers suspected the animals venturing into the treeless plains had lost their fear of the open landscape. To test this idea, they scattered carnivore urine, artificial lion scat and played recordings of leopard calls over a speaker to mimic the presence of predators. When the researchers compared the movements of the animals in the two days prior to setting out the predator cues to their movements in the two days afterward, they found the once bold bushbuck retreated to the forests’ cover, the researchers report today in the journal Science. “Our results really underscore the importance of re-introducing top carnivores to Gorongosa National Park,” Pringle said. “The herbivores are doing well, but it’s clear that we need carnivores back to restore order.” “That’s exactly what Gorongosa’s conservation team is doing,” he added. Last year, they brought in 14 African wild dogs to the park. So far, the predators are doing their job. “The new wild dogs are actually eating mostly bushbuck!” Pringle said. The conservation team plans to introduce more wild dogs and some leopards in the future. The researchers suspect bushbuck will vacate the plains pretty quickly. “It’s up to the predators to put the prey back in the place,” Pringle said.