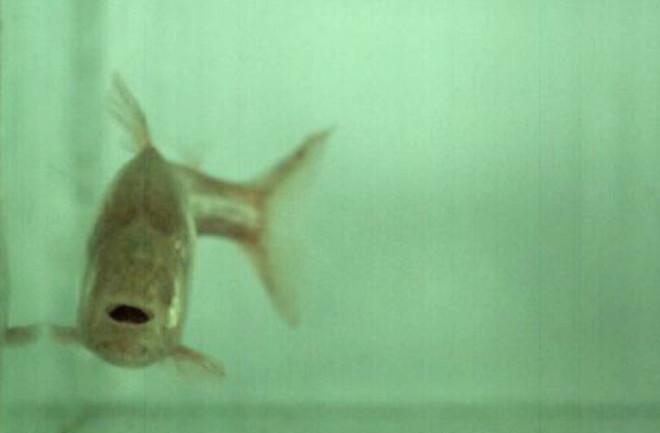 This is not an April Fool's joke. As bats squeak and swoop through pitch-black Mexican caves, the pale fish that inhabit the pools below them perform a soundless imitation. These fish are blind but sense the world through subtle pressure changes on their skin. To navigate the cave floors, they also use a tool that's never been observed in another animal: the waves of suction they make each time they open and close their mouths. These pulses warn them of nearby obstacles like the calls of an echolocating bat do. Mexican blind cavefish, or Astyanax fasciatus, are a kind of small tetra sometimes found in home aquariums. At some point in their evolutionary past, these fish moved into caves and lost their eyeballs entirely. They have a close relative that lives outside of caves and still has its eyes—in fact, the blind and sighted fish are so closely related that they're still considered one species. While it gave up its sight, the blind tetra also gained skill at navigating in the dark. To find its way, it takes advantage of something called the "lateral line." This is a sensory system that all fish have. Through receptors on their heads and bodies, the lateral line lets fish feel movements and pressure changes in the surrounding water. "The lateral line of the blind fish is much more sensitive" than that of its sighted relatives, even though they're the same species, says Tel Aviv University zoologist Roi Holzman. The blind cavefish has more sensors on its body, and each of them is twice as sensitive as a sighted fish's receptors. It can feel its way around by judging disturbances in the ripples sent out by its own swimming body. Yet Holzman, watching the cavefish swim and make O's with its mouth like any other fish, wondered whether there was even more to its navigational prowess. Could it also be using suction from its mouth to steer around obstacles? Holzman and his colleagues observed blind cavefish swimming in an aquarium with no food, so they knew the fish weren't opening their mouths to eat. (Fish also open and close their mouths to help them breathe.) After leaving five cylindrical objects in the aquarium for two days so the fish could get used to them, the researchers suddenly shifted the objects around. Filming their subjects, they saw that the fish slowed their swimming way down in the now-unfamiliar environment. They also opened and closed their mouths 3.5 times more often— "Oh! Oh!"—as if gathering information. In another set of experiments, the scientists filmed cavefish with a set of high-speed cameras whenever they swam toward a corner of the aquarium. They saw that the fish rarely opened their mouths when they were more than 7 centimeters from the wall. The water they disturbed simply by swimming gave their finely tuned sensory systems all the information they needed. But the fish opened their mouths twice as often as they moved from 7 centimeters to 1 centimeter away from the wall. And within the final centimeter, that frequency was six times higher— "Oop oop oop oop oop!" It seemed that the cavefish were using their mouths to send pulses of suction into the water, and navigating using the disturbances they felt in those pulses. As they approached an obstacle, they sent out more and more signals. Holzman and his coauthors created a mathematical model to see how such a system might work. To measure the physical effects of each mouth-gape, they filmed the water at high speed with tiny glass beads in it, letting them visualize the flow. The model showed that by opening and closing its mouth, a cavefish can generate signals for its lateral line system that are up to 50 times stronger than the signals it creates by swimming. And while signals from the fish's swimming body depend on its speed, signals from mouth suction don't—it can gather information this way even when it's not moving at all. Holzman considers mouth suction to be, well, an open-and-shut case. "I am very confident that this mechanism is important in blind fish navigation," he says. However, there could still be even more signals that the fish senses with its lateral line. Waves made by its mouth and body might not be the cavefish's only tools. Holzman is now using underwater microphones to try to directly record the signals the fish emit. Sending their navigational pulses through the water, blind cavefish are perhaps more similar to echolocating whales and dolphins than to bats. Yet this ability might not be as special as it seems. All fish have the two basic tools needed, which are mouth suction and the lateral line system— "the emitter and the sensor," Holzman says. He plans to film more fish and find out whether other species, even the ones with eyes, navigate using the tools of the blind. ********* You can watch a high-speed video of a blind cavefish "oop!"-ing toward an aquarium wall here. (The video was filmed at 125 frames per second and played back at 30 fps.) Image and video: Holzman et al.