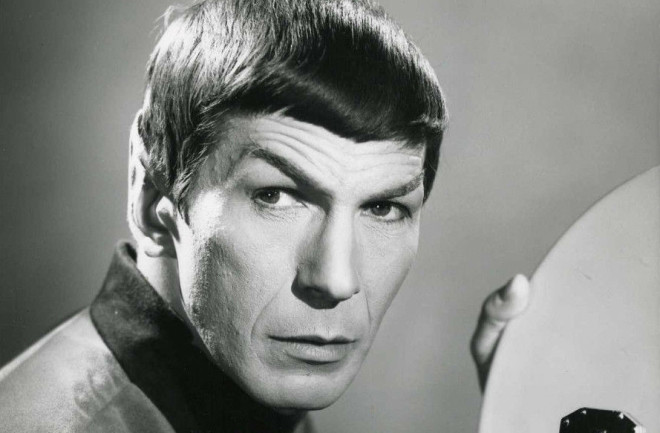 (Credit: Wikimedia Commons) From Spock to "The Rock," arched eyebrows can speak volumes. Now researchers suggest that communicative eyebrows may have proven key to the evolution of modern humans, a marked advance over the prominent brow ridges of early humans. Modern humans possess smooth foreheads with expressive eyebrows. In contrast, early humans had sloping foreheads with thick brow ridges. "There have been many explanations over the years for why early humans had these huge bony ridges," said study co-author Paul O'Higgins, a physical anthropologist at the University of York in England. "One is that they served kind of like a big girder across the head, protecting the skull when one bites hard. Another suggestion was that their faces were so enormous, they didn't fit under the brain, so these brow ridges sat forward simply to fit the gap between the forehead and the eye sockets."

Bow to the Brow

To see what role these protruding brow ridges might have played in early humans and learn more about why modern humans no longer have them, scientists first created a 3-D computer model based on X-rays of a fossil skull known as Kabwe 1 from Zambia. This cranium belonged to an archaic human lineage known as Homo heidelbergensis, which lived between 600,000 and 200,000 years ago. The researchers next experimentally reduced the size of Kabwe 1's brow ridges to see what the effects would be. When they simulated the forces of biting on different teeth in the skull, they found the brow ridge experienced very little force, and taking it away had no effect on the rest of the face when biting. They also found that Kabwe 1's heavy brow was much larger than was needed to fill the space between the forehead and eye sockets.

Model of a modern human skull next to Kabwe 1. (Credit: Paul O'Higgins, University of York) Oversized brow ridges may not play a role physically, but the scientists now suggest they may have had a social function. They noted that baboon-like mandrills have bony, colorful muzzles that males use to signal dominance, and they may have played a similar role in early humans, like the antlers on a stag. Indeed, O'Higgins noted that when anthropologist Grover Krantz wore artificial brow ridges for months, "the way in which people crossed the street to get away from him suggested they might prove intimidating." The communicative eyebrows and foreheads of modern humans might have emerged as a side effect of the way in which our faces have shrunk over the past 100,000 years. This shrinking process "has proved especially rapid over the past 10,000 years, with our faces now often not big enough to allow wisdom teeth to come out," O'Higgins said.

It remains uncertain why the modern human face shrunk — it may be due to the advent of cooking and other forms of food preparation, or a change in levels of exercise, among other possibilities, O'Higgins said. However, these changes did coincide with increasing sociality among modern humans. "One thing people are very good at is mind-reading — you may not be talking, but if I can see you, I can often tell a lot about what you're thinking," O'Higgins said. "Trading large brow ridges for mobile eyebrows and a high forehead might have given us a big canvas to signal more subtle emotions than before to help us form groups." This change may have helped play a key role in modern human evolution. "If you look at archaic lineages like Neanderthals, their genetics suggest there was inbreeding, while if you look at modern humans, there were larger groups and a lot more mobility between groups," study co-author Penny Spikins, an evolutionary anthropologist at the University of York. "The ability to express quite subtle emotional changes may have opened up the possibility to communicate with people we didn't know particularly well, allowing collaboration between different groups of people." The researchers do expect that their new theories on brow ridges might raise a few eyebrows. "But even the phrase 'raised a few eyebrows' just goes to show that eyebrows are capable of quite complex ideas," Spikins said. O'Higgins, Spikins and study lead author Ricardo Miguel Godinho detailed their findings online April 9 in the journal Nature Ecology & Evolution.