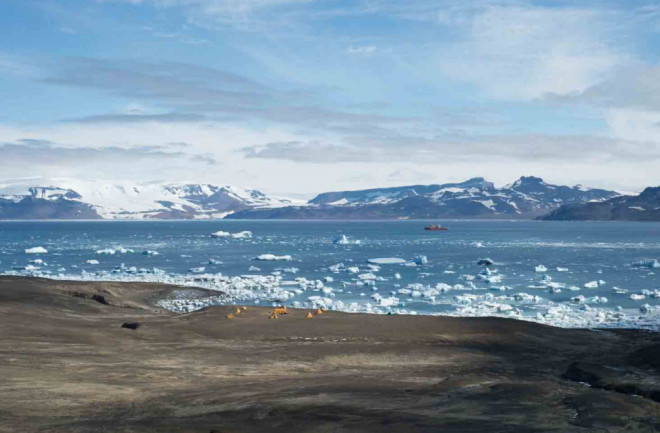 A view of the researchers camp on Vega Island from on high. (Credit: Antarctic Peninsula Paleontology Project) A recent expedition to Antarctica has returned with a cache of fossils and data gathered over the course of almost two months of work on the frozen continent. Before you ask what they found, however, let's get to the real question: What were they even doing there in the first place? Hunting for fossils in the most inaccessible and inhospitable continent on the planet, where over 99 percent of the ground is covered in solid ice, seems like a tall order, verging on an exercise in masochism. Antarctica may be possessed of bone-chilling winds and desolate tundras, but it also hides a trove of fossils from one of the most intriguing epochs of life on earth. The Antarctic Peninsula Paleontology Project, or AP3 for short, is a diverse team of paleontologists and geologists, along with a large support staff, that has made three trips to Antarctica over the past seven years to prospect, explore and collect data. Their latest trip, which lasted from February 2 to March 24, was the longest and largest to date and built on their work from previous expeditions. This year, they returned with a wealth of fossils — still to be studied — that likely represent several new species and further illuminate one of the more mysterious moments in Earth's history. Although the paleontological rewards are big in Antarctica, every day tests researchers' patience and grit in a new way.

A Time of Change

One layer of rocks that lies exposed on the continent dates back to the end of the Cretaceous and beginning of the Paleogene, between 40 and 100 million years ago. This time period is known as the K-Pg boundary, and it serves as the dividing line between the age of dinosaurs and the age of mammals. During this window, some 66 million years ago, roughly 65 percent of life on the planet died out, paving the way for mammals to rise to dominance. Back then, Antarctica was a far different land, covered in vegetation and populated by dinosaurs, ancient birds and mammals. Prehistoric marine reptiles swam in the seas off the continent's coasts. Antarctica today is a time capsule of that era, where relics of a poorly understood yet immensely critical moment in Earth's history lie frozen in the ground.

An Expedition Years in the Making

AP3 launched in 2009, when a small team of paleontologists led by Ross MacPhee of the American Museum of Natural History journeyed to James Ross Island, located at the tip of the Antarctic Peninsula, to hunt for potential fossil sites. That trip was hamstrung by an abundance of sea ice, which kept them confined to the ship for the majority of their time in the region. Another expedition to the same area in 2011 saw greater success — they established a camp and explored several areas of interest, and collected a few fossils. For their latest trip, originally planned for 2013 and 2014 but called off because of ice, they returned in force with a larger ship, 12 researchers, a documentarian and two helicopters.

A map showing where the researchers set up camp and conducted prospecting trips. (Credit: Antarctic Peninsula Paleontology Project) The air support turned out to be crucial for the group as they excavated one of their largest finds, the shoulder bone of a plesiosaur, an extinct, long-necked marine reptile. They found the fossil on Sandwich Bluff, a mountain on Vega Island where most of the team was camped. After wrapping it in the plaster, the fossil weighed over a hundred pounds, says Matt Lamanna, the lead investigator of the AP3 expedition. Instead of dragging their precious cargo for miles across the tundra, they hitched it to a sling on the chopper and airlifted it out. "It's a luxury we don't normally have when we work in Antarctica," says Lamanna.

Paleontologists narrow down their fossil search by seeking out rock formations from the time period they want to survey. When those rock formations are covered in snow and ice, the hunt is made all the more difficult. So, the AP3 team was limited to the few areas where exposed rock was visible. Vega, Seymour and James Ross islands, where they spent most of their time, were chosen for their relatively large expanses of naked rock. "This is really the only place in Antarctica with exposed Cretaceous rocks that have produced any fossils," says Eric Roberts, a geologist at James Cook University. "If we could just strip back that ice, especially in certain areas near to where we think the [Cretaceous-era] shoreline is, I’m sure we would find a lot. It is the richest fossil-bearing rock I have ever worked in."

A nautiloid fossil discovered by the researchers. (Credit: Antarctic Peninsula Paleontology Project) New opportunities may emerge as the climate continues to warm. Julia Clarke, a professor at the University of Texas at Austin and a principal investigator with the expedition, said warmer days saw the frozen glaciers produce roaring waterfalls as meltwater ran off. "It was actually a little bit disturbing because there was water just pouring off of the glaciers all around us," says Clarke. "I know some places on the peninsula have hit temperatures they haven’t hit in recorded history. It was far warmer than in 2011. It was striking to see these huge waterfalls pouring off of the glaciers on Vega on these warm days."

Even so, a chance snowstorm could ruin everything and cover up carefully prospected areas with a layer of white. One dig that the team had nearly finished was completely buried after a snowstorm, covering up hours of meticulous labor, says Roberts. "Snow is a nightmare for us, because to find fossils you need to find the rocks that they are in. So when snow falls, it covers up many of the rocks and that really limits our ability to find fossils ... you could literally step on a dinosaur bone and not know it because of the snow," says Lamanna.

The team sets up camp. (Credit: Antarctic Peninsula Paleontology Project) While snowfall presented a logistical problem, the wind proved to be an even more daunting foe. The team arrived in Antarctica toward the end of the austral summer, when temperatures hover between 20 and 50 degrees Fahrenheit. While that may not be any worse than a Midwestern winter, the team faced winds that could reach speeds of over 50 miles per hour, turning a relatively temperate day into a wind-chilled ordeal. Frostbite and hypothermia were constant considerations, even under the three layers of clothes, hats, goggles, balaclavas and hand warmers. Abagael West, a paleontologist and PhD candidate at Columbia University recalled being trapped in a valley by an especially strong gust, unable to even step out for fear of being swept away. "I knew there was stuff there, and there was a section that I had been working for a couple of days, and the frustration of not being able to go to it because I literally couldn't stand up was kind of insane," she says. [embed]https://vimeo.com/163327606[/embed]

The majority of their finds, however, simply required careful observation. Because the Antarctic soil is loose, it rapidly erodes year after year, leaving hard objects like fossils sitting on top. According to Kerin Claeson, a co-principal investigator and professor of anatomy, one of her favorite moments on the trip came after finding just such a fossil. "We’d been looking for several hours throughout the day just trying to confirm this one part of the boundary, and I just decided to wander over one side of the hill," says Claeson. She saw something odd on the ground and decided to investigate. "It’s kind of like looking at cracks in a sidewalk and you kind of imagine that you're seeing something, and I picked it up and sure enough it was actually bone. Then suddenly everything started to appear," she says.

Fossilized wood found on Cape Lamb. (Credit: Antarctic Peninsula Paleontology Project) The difficulty of prospecting, combined with the narrow range of areas in which to search, made every find cause for celebration. Pulling even a small fossil from the frozen dirt at the South Pole represents the culmination of months of planning and preparation, as well as the work of a network of support staff. Lamanna says that just being able to make a discovery in Antarctica was the highlight of the trip for him. "I’ve found dinosaurs in different places around the world, but I don't think I’ve ever been prouder of a single dinosaur bone than I was of this one," he says. "It’s simply because dinosaur bones are so incredibly rare in Antarctica that finding a little tiny piece of bone in this environment was as important to me, personally and professionally, as finding bones in other places where I’ve worked before." [embed]https://vimeo.com/163328566[/embed]

Returned With a Massive Haul

Even with the challenges, over the course of their nearly eight weeks on the continent the team came back with a range of fossils, including bony fishes, shark teeth and vertebrae, fragments of dinosaur bones, larger marine reptiles, and what could turn out to be their most important find: a potential ancestor of birds as we know them today. While the evolutionary link between dinosaurs and birds is fairly established, researchers know very little about what happened to birds around the time of the extinction period. The one link to modern-day birds is Vegavis iaai, a specimen discovered on Vega Island in 1992 by Argentinian researchers, and fully described by team member Julia Clarke in 2005. The bird, related to modern-day ducks and geese, is currently the only evidence that modern-looking birds survived the Cretaceous Period. A specimen found by the team could add crucial support to that that theory. While the researchers were unable to talk in detail about their findings, as they had not yet had a chance to analyze them in depth, Lamanna said that they believe their findings from this expedition will build on the evidence presented by the 2005 find.

Looking back at the camp from on high. (Credit: Antarctic Peninsula Paleontology Project) Aside from fossil finds, the group also conducted trips to other islands in the region, with the goal of determining their geology, and pinpointing new places to search, which come at a premium in the Antarctic. Roberts said that the simple act of exploring new places gave him a great sense of satisfaction. "The single most exciting part of that trip was that we were mapping geology in places that had never been looked at," he said. "Discovery is really the heart of this trip, so whether it's fossils or a new cove with geology that hasn’t been on a map before, those are the things that are really fun and fulfilling." Working in Antarctica brings with it both challenges and rewards, but the daily frustrations are often balanced by the austere beauty of a land that is mostly untouched by humans. "To be in this incredibly beautiful place every day, with these sunsets, to have this dramatic landscape of ice and rock, and all the sounds you hear are the sounds of moving ice or wind or stone," says Clarke. "I cant really explain that because it’s not a singular moment, but it was a great privilege to be in that place."