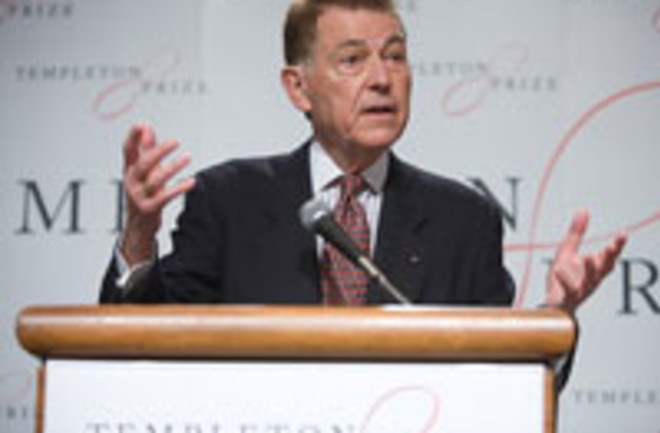 Former Roman Catholic priest and respected evolutionary biologist Francisco Ayala has won this year's Templeton Prize. The $1.53 million award honors a living person "who has made an exceptional contribution to affirming life’s spiritual dimension, whether through insight, discovery, or practical works." The John Templeton Foundation cited Ayala's dogged work through the years advocating the peaceful co-existence of science and religion in its decision. The somewhat controversial prize is often given to scientists who find common ground between religion and science, but previous winners have also included more traditional spiritual leaders like Mother Teresa and televangelist Billy Graham. Ayala is the former president of the American Association for the Advancement of Science and is respected

for his research into the evolutionary history of the parasite scientists have associated with malaria, with an eye toward developing a cure for the disease. He also pioneered the use of an organism's genetic material as molecular clocks that help track and time its origins [The Christian Science Monitor]. But he is known best, perhaps, for being an expert witness in the 1981 federal court trial that led to the overturning of an Arkansas law mandating the teaching creationism with evolution in science class. In 2001, he was awarded the National Medal of Science.

Ayala will receive his award at the Buckingham Palace on May 5, but addressing a press conference yesterday in Washington, D.C. he reiterated that science doesn't have to contradict religion:

“If they are properly understood,” he said, “they cannot be in contradiction because science and religion concern different matters, and each is essential to human understanding” [Templeton Prize].

Referring to Picasso’s paiting Guernica, which famously depicts the tragedies of war, Ayala noted that science helps us understand the painting's proportions and pigments, but only a spiritual view conveys the horror of the subject matter. He argued that the spiritual and scientific analyses were both necessary to comprehend the totality of the masterpiece, saying: "Science gives us an insight on reality which is very important; our technology is based on our science.... But at the end of the day, questions important to people, questions of meaning, purpose, moral values, and the like" are not answered through science [

Born in Madrid in 1934, Ayala felt the two pulls of religion and science early on. He became an ordained priest, but left the fold when he came to New York's Columbia University to get an PhD in genetics. He's currently a top professor of biological sciences at the University of California, Irvine. Some scientists have criticized the John Templeton Foundation's work, arguing that science and religion shouldn't be mixed up together. Critics were further angered when the National Academy of Sciences hosted the Templeton Foundation's announcement of Ayala's award, saying that the foundation

may gain scientific respectability by associating with scientists and their institutions [Guardian].

California Institute of Technology physicist Sean Carroll, who writes for the DISCOVER blog Cosmic Variance, was one of those who voiced his disapproval:

“The Templeton Foundation is working in good faith. They’re in favour of science but want to see a reconciliation with religion. That’s not evil and crackpotty, but it’s incorrect. It’s a mistake.... I’m not asking NAS to put out an official statement of atheism. They don’t have to take a stand either way, but the academy is best served by just staying away” [Nature blog].

But the NAS president Ralph Cicerone waved the concerns away, saying NAS agreed to host the event when a member of the foundation requested a room for the ceremony. Ayala plans to give his award money to charity.Related Content:

More From Discover
Health
Children and COVID-19: How Should We Consider the Risks?
The Sciences
Pandemic Waves, Then and Now
Planet Earth
Five Apocalypses Humanity Has Survived
Health
Why Another COVID-19 Surge Could Devastate U.S. Hospitals
Health
Can Housing Instability and Homelessness Lead to Health Problems?
Health
How Did Smallpox Anti-Vaxxers Compare to Those Today?
Recommendations From Our Store
My Science ShopDiscover STEM Kits
My Science ShopDiscover 2022 Calendar
My Science ShopStrange Science
My Science ShopElements Flashcards
Shop Now
Stay Curious
Join
Our List