Evolution Made Ridiculous Flightless Birds Over and Over 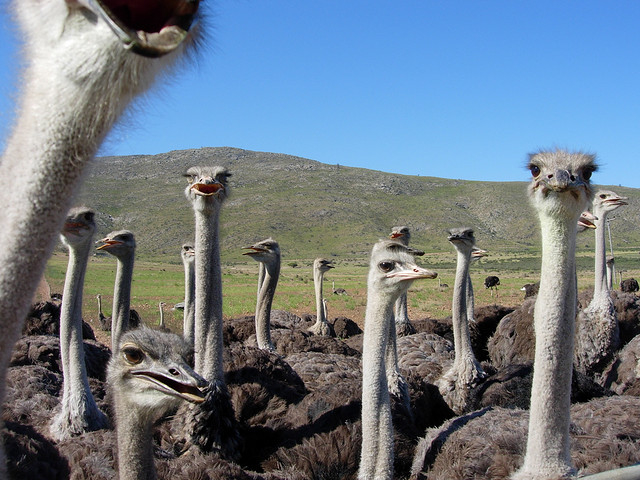 Watching an ostrich sprint across the plain like a mean two-legged dust mop, you might think a mistake has been made. Surely this isn't one of evolution's prouder moments? But new genetic evidence says that the group of birds including ostriches, emus, and other ungainly birds all came from flying ancestors. They lost the ability to fly not once, but over and over again. Something must have been working. The ratites are a group of birds that includes the ostrich and emu, as well as the kiwi, rhea (like a smaller, South American ostrich), and cassowary (with a bright blue face and what looks like a toenail on its head). There were also the moa of New Zealand and the elephant bird of Madagascar—gigantic Big Bird types that went extinct within the past several hundred years, likely due to humans. The birds themselves are pretty obvious, but the story of ratite evolution "has always been a contentious issue," says Oliver Haddrath, an ornithology research technician and PhD student at the Royal Ontario Museum. Scientists have never been certain how ratites arose, or how they're related to each other and to more normal birds. In the 1960s and 1970s, Haddrath says, molecular evidence showed that the flightless ratites were closely related to birds called tinamous. Unlike the ratites, these small ground dwellers in Central and South America can fly (though they don't often choose to). At the same time, scientists realized that everyplace ratites live or used to live (Australia, South America, Africa) was a piece of land that once belonged to the supercontinent Gondwanaland. Perhaps the common ancestor of all ratites was a flightless bird on Gondwanaland that had already split off from its flying relative the tinamou. When the supercontinent broke up, the birds left standing on each bit of land could have evolved into different species. Since then, some evidence has supported this theory, while other studies have contradicted it. Haddrath and his coauthors approached the question using DNA from the extinct moa, as well as updated DNA-sequencing technology that let them gather large amounts of data at once. "We used over 1 million base pairs" of DNA, Haddrath says, "to test whether the tinamou was closer to the moa than the moa was to the emu and ostrich." At last, they would unearth the answers to the ratites' family secrets. They found that the tinamou isn't a distant cousin after all, but a sibling smack in the middle of the ratite family tree. This suggests that the common ancestor of the ratites and the tinamou could fly, and while the tinamou held onto this skill, the branches leading to other ratites became flightless again and again. 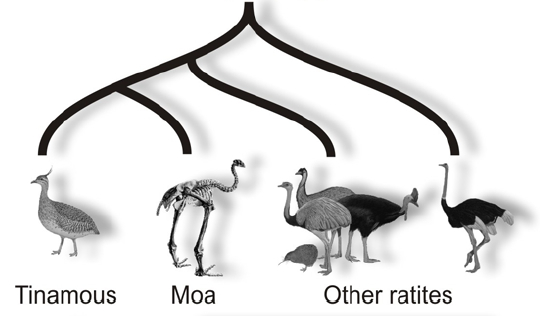 Since tinamous kept their ability to fly, every other branch in this tree probably also started with a flying bird. Technically, it's possible that the opposite is true: all the ratites and the tinamou evolved from one flightless ancestor, and the tinamou re-learned how to fly. But Haddrath says it's unlikely. "There are no known examples of a flightless bird species regaining flight," he says. Many kinds of birds other than the ratites have lost the ability to fly—penguins, some ducks, and so on—but none have gotten it back. Generally, it's "considered much easier to lose a trait than regain it," Haddrath says. The relationship between the tinamou and other ratites, for which Haddrath says there's "overwhelming evidence" in the DNA, was hidden by the shapes of the birds' bodies. "Most studies using skeletal features have concluded that the ratites are each other's closest relatives, and the tinamous are a distant cousin," Haddrath says. But it now seems that the demands of land-bound life made ratites' skeletons evolve in similar ways. This convergent evolution masked the birds' true relationships. Since so many birds have given up flying, it must be an easy trait to lose when it's beneficial, Haddrath says. For birds that are adapting to life on land, hanging onto the traits that let them fly may (ironically) weigh them down. As they lose flight they're free to evolve into the weird, walking species we know today. It's apparently a winning strategy—as long as humans don't arrive on their island to wipe them out.

Postscript (5/26/14): Another study, published this month in Science, compared ancient DNA from elephant birds to DNA from modern ratites and came to the same conclusion: flightless ratites evolved several times, independently, from a flying ancestor. You can read more at Not Exactly Rocket Science or in the New York Times.