Everything to Know About Saber-Toothed Cats and their Extinction

Saber-Tooth Cats went extinct less than 10,000 years ago, but scientists are unsure why. But the importance of the saber tooth is well known. 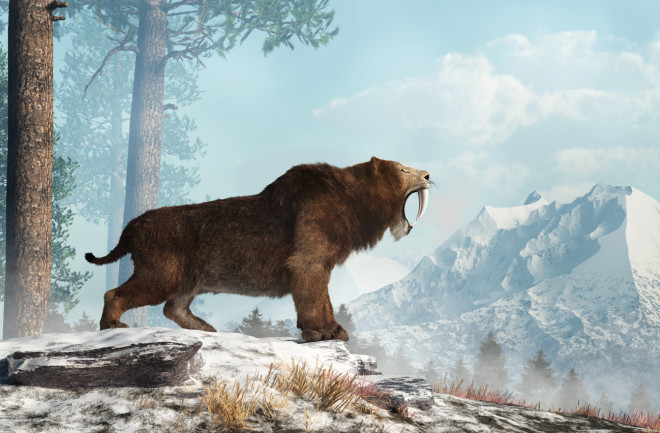 One of the major challenges to studying extinct carnivores is that there are simply less of them, explains Vanderbilt University paleontologist and paleoecologist Larisa DeSantis. Trophic levels — the different levels in an ecosystem, from primary producers to apex predators — shrink the higher up they are in the energy pyramid because energy is lost as heat at each level.

But at Rancho La Brea, better known as the La Brea Tar Pits, the situation is reversed. When the tar seep trapped prehistoric herbivores, that in turn attracted carnivores, says DeSantis, who grew up in Los Angeles with the site practically in her backyard.

Those carnivores included Smilodon, better known as the saber-toothed tiger — and its lesser-known cousin Homotherium latidens, the scimitar-toothed cat. While these are two of the most iconic saber-toothed cats of the Americas, the first of which emerged during the Eocene some 56 million years ago, they’re far from the only iterations of saber-toothed animals.

The major subfamily in Felidae, for example, includes 58 different species. Then there are the false saber-toothed cats, in the subfamily Nimravidae, which includes at least 22 species of copycats. Continuing work by DeSantis at the La Brea Tar Pits, as well as by her colleagues elsewhere in the paleontological community, is advancing our understanding of them all.

Long in the Tooth

“[The saber-shaped canine tooth] is a feature that comes and goes, but is prevalent throughout time,” DeSantis says. “It's definitely associated with a very specialized way of acquiring prey.” In short: These predators would pin their prey down and stab it somewhere important with overlong fangs. The longer the teeth, the faster the prey would bleed out.

And those seconds can be crucial, DeSantis explains: “People actually underestimate how much damage an herbivore can do to a carnivore.” A well-placed kick from a big herbivore can easily break teeth or even a jaw, leaving a predator with a “lasting injury that will forever influence, for the rest of that animal's life — however long that may be — how they hunt or acquire prey,” DeSantis says.

Of course, there are tradeoffs. The longer a pair of fangs become, the more fragile they are. Plus, the length of the tooth is limited by how much the creature can open its jaws to still effectively bite.

To avoid these obstacles, DeSantis says, saber-toothed cats were careful; studies have found that they broke their teeth less often than the American lion (another predator that went extinct around 10,000 years ago). A 2010 study suggested that the big cats used powerful shoulders and forearms to grapple prey and restrain it, much like how modern-day tigers kill their prey.

But another of these workarounds makes Smilodon more reminiscent of lions than tigers. Some of the La Brea specimens DeSantis has studied were missing their saber-shaped teeth, likely having broken off sometime during the animal’s life. Critically, though, the holes had been filled in — meaning these predators survived for long enough after that initial break that their bodies repaired the damage.

Examining the microwear on the teeth of some of these animals reveals they were likely feeding on softer foods afterward, “which is contrary to what we might expect if they were having to scavenge,” DeSantis says.

She recalls footage of a female lioness taking down a large prey, opening it up and pulling out the underbelly of its carcass for another female with an injured jaw. “The work that we’re doing is revealing that maybe saber-toothed cats were actually compassionate, and they were actually sharing carcasses,” she says.

The last of the saber-toothed cats disappeared less than 10,000 years ago. Why they went extinct is “the million-dollar question,” DeSantis says.

The ambush predators were previously presumed to be in competition with another iconic Ice Age predator, the dire wolf. But stable isotopes in their teeth now suggest that the saber-toothed cats were feeding on animals like camels, tapir and even deer in forested environments. Dire wolves, on the other hand, likely would’ve been running down horses and other large, grazing mammals in open areas.

Read More: The Mysterious Origin of the Real-Life Dire Wolf

Another theory was that competition from newly arrived humans and gray wolves in the Americas drove them to extinction. But if that was the case, you’d expect to see saber-toothed cats foraging food sources more thoroughly, including eating bone, DeSantis says. Initial evidence of high rates of tooth breakage seemed to support this — but while the breakage numbers do point to a highly competitive environment, the microwear on their teeth suggest that Smilodon was eating just as much flesh in its final days.

“Right before they go extinct, they’re happy as clams,” DeSantis says. “They’re eating just like they were throughout time, essentially.” Interestingly, she continues, it's the animals that survived to the modern day, like pumas, that displayed more evidence of scavenging in the past.

Current avenues of investigation into the disappearing saber-toothed cats look toward the major ecological disruptions associated with the spread of humans and the turning of the Ice Age.

“It's a huge question, and it's hotly debated, depending on who you talk to,” DeSantis says. “I think we're going to make some significant headway on it over the next two years, and also the next decade for sure.”