Every Living Thing Lies — Including You

Humans deceive — and so do animals. Here’s why we fall for trickery, and what happens when lies go unchecked. 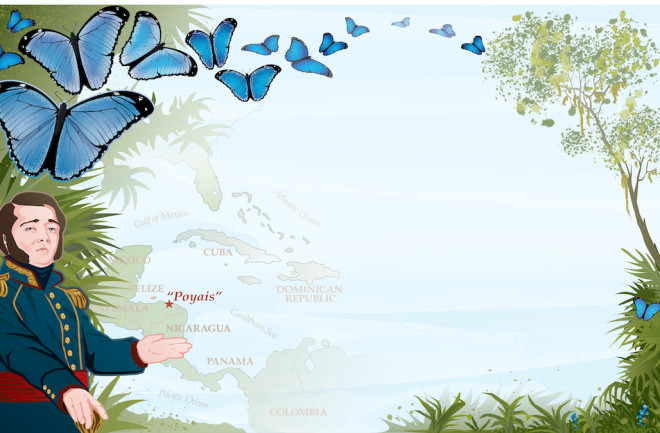 This article appeared in the June 2021 issue of Discover magazine as "Natural-Born Liars." Subscribe for more stories like these.

We tend to assume that deliberately telling lies is some sort of pernicious aberration unique to liars. Perhaps it’s the result of a mental defect or, more likely, some sort of moral failing. It is not — everything living lies, including you.

Before you dismiss the thought, consider this: Human deception and evasion are no different than the animal equivalent of camouflage, spots and stripes. Charm is our very own version of frilly fins and peacock feathers. And the effort to deceive is an evolutionary arms race as old as organic life.

Take the blue morpho butterfly, for example; it’s the one with beautiful, iridescent, sky-blue wings. First lie: That dazzling blue color isn’t actually there. It’s just an optical illusion, created by blue light selectively reflected off of millions of mirrorlike, microscopic gray scales. The reverse side of their wings have no scales and are a dark, dull brown. That vivid blue only exists in your mind — or your eyes, depending on how you see it.

But real or reflected, the colors actually help them to hide in plain sight, just not via camouflage. Rather, the butterflies do their best hiding in midair, where they should be at their most vulnerable.

As they fly, blue morphos flaps their wings rapidly back and forth between visible dark brown and difficult-to-see, reflected sky blue. The effect makes them seem — through a perceptual glitch — to appear and disappear. This strange game of hide-and-seek is called a flashing defense, and it has nothing to do with blending in. Rather, it exploits the inability of many species, particularly birds, to keep their eyes fixed on a moving object that doesn’t move in a continuous line.

From caterpillars to con artists, everything living lies. The capacity for deceit is an important asset, honed over millions of generations, and it is an essential part of communication — one with sometimes deadly consequences.

In the evolution of deceit, language only came about quite recently, billions of years after more basic tools of the con. There’s even some debate that humans may have developed language specifically to manipulate each other in newer and cleverer ways. It’s just the latest innovation in a billion-year-old chess game.

As Robert Trivers, professor of anthropology and biological sciences at Rutgers University, puts it: “Our most prized possession — language — not only strengthens our ability to lie, but greatly extends its range.”

Take, for example, the intricate con carried out by Gregor MacGregor, a charming heir to a noble family from Scotland in the 18th century. Like many noble families at the time, the MacGregors had seen better days. So Gregor joined the military to seek fortune and glory. Mostly fortune.

In October 1822, after over a decade of fighting and traveling through the jungles of South America, MacGregor returned to England. But he didn’t come home as a mere soldier or decorated war hero; he returned to London as Gregor I, prince of the Caribbean nation of Poyais.

Immediately, MacGregor began a widespread media campaign to educate the public about Poyais. He published articles about Poyais in respected journals, describing the land’s unspoiled beauty and excessive natural resources.

The prose was accompanied by detailed illustrations, which he claimed he’d brought back from the country itself. These pictures showed a land slightly larger than Wales, full of clean, fresh water and fertile soil for cultivation. There were forests full of trees and game and exotic flora and fauna. The riverbeds were lined with big chunks of gold, and numerous other natural resources, including precious gems, all there for the taking.

MacGregor even brought a local back from Poyais, whom he declared an ambassador, as well as a copy of the Poyaisian constitution and the very land grant and proclamation making him cazique of Poyais. He claimed the natives were friendly, that the cities were brimming with culture, and that the land was ripe for development and a Christian colonial ruler — a proposition that was particularly appealing in his native Scotland, as the country had no colonies of its own.

Does this sound too good to be true? Well, yes, clearly. The whole idea of Poyais being conveniently perfect in every regard and that anyone believed that for a second, sounds foolish — now.

The Problem with Perception

The default setting in humans is to accept the reality that has been presented to us, so much so that a little kink in our thinking called honesty bias constitutes one of 12 basic cognitive biases that circumscribe rational thought. These are systematic errors in cognition that occur in processing and deciphering information we glean from the world around us. They’re not mistakes or logical fallacies; they’re hardwired limitations in our thought process.

Honesty bias is a sort of mental shortcut our brains take where we accept anything we’re presented with as true, if there are no obvious contradictions. For example, if you ask someone the time and they look at their watch and tell you it’s 3 p.m., you will believe them. You don’t reflexively question whether they’re lying to you or whether their watch is wrong — unless, of course, it’s too dark out to be 3:00 or you have reason to suspect that the person wants you to be late.

Though cognitive biases tend to skew our judgment badly in some situations, they exist for a reason. Social psychologists believe they help us process information more efficiently. Honesty bias may leave you open to being deceived, but, by the numbers, the vast majority of information you’re presented with is true. Not having to reason out every bit of data you encounter is a valuable neurological ability, a shortcut that allows us to function and learn.

Consider: If someone told you that there was a commercial rocket launch this year, taking a shuttle full of paying customers to the moon, would you believe them? You probably would; people believe in the reality that they’re presented with, and this is ours. Many of us have lived our whole lives in a post moon-landing era, where stories about rocket launches and companies like SpaceX dominate headlines.

Even if Poyais still sounds too good to be true, so did the rest of the New World in the 18th and 19th century. MacGregor lived in the era of empire building via seized foreign territories, country-sized land claims based on very little, and unimaginable stolen riches. India was real, with its gleaming golden palaces and massive gemstones. The Near East was real, with its vast oceans of sand and ancient stone cities. Australia was real, with its bizarre, exotic flora and fauna. Why not Poyais?

MacGregor succeeded in getting seven massive ships’ worth of colonists to leave their homes and embark on a journey to the New World, having spent or exchanged everything they had to start a new life in His Highness Gregor I’s now famous paradise. In September 1822 and January 1823, the first two ships, the Honduras Packet and the Kennersley Castle, embarked for Poyais carrying hundreds of passengers, as still more ships back in England were filling with people and preparing to set sail.

But when the Honduras Packet reached land, the colonists had no idea where they were — except that it was definitely not what MacGregor had described. They assumed they had landed in the wrong location, as they found no ready-made cities, no valuable resources, no farmable land, not even edible food. And there were no friendly natives to meet them.

In fact, there were no signs of any other inhabitants at all. Even the climate was a lie. The section of coast where they landed (in modern-day Honduras) was a hot, swampy, mosquito-infested jungle so uninhabitable that it remains largely undeveloped to this day.

They did their best to build shelters out of sticks and mud and to find fresh water, but a majority of the stranded settlers died from starvation, exposure and tropical diseases like yellow fever and malaria on the isolated, dangerous and mostly deserted Mosquito Coast. It wasn’t until a small group of survivors — all that was left — was rescued by a British ship from a nearby colony in Belize and taken back to London that the disaster was exposed.

MacGregor had not merely oversold Poyais’s virtues or exaggerated his ownership or authority in the matter; he’d made up the entire country. Poyais never existed at all.

There are a lot of funny quirks in our minds that explain, both neurologically and psychologically, why this sort of cascading failure of basic reason would occur. First and foremost, there’s that pesky honesty bias. Authority bias is also often at work. This mechanism compels us to trust and believe those who seem to have more power or influence (including mere social stature) than we do. Essentially, we’re wired to believe and trust our so-called betters.

For instance, you’re more likely to believe a doctor who tells you you’re sick than a friend who tells you the same. This makes sense: We default to generally trusting and believing people we deem to be authority figures.

But what’s really interesting is that you’d also be more likely to believe the doctor than your friend if they were to tell you how to program the computer in your car, even if you knew that they knew nothing about it. The same holds true for politicians and so-called “experts” of any kind — even celebrities. We unconsciously assume that they’re better informed than we are, and we are more inclined to take what they say on faith. It’s why celebrity product endorsements are so valuable to companies: You’re hardwired to trust that a famous actress really does know which fruit juice will prevent aging or that your favorite musician really does have the inside track on which charities are legitimate.

We don’t believe them based on substantial reasoning; we believe them because our brain has taken a shortcut. And, like honesty bias, authority bias benefits us, individually and as a cooperative group — we don’t need to know everything about our math teacher to trust them when they show us long division.

But it’s also an open loophole in our thought process that can backfire, or be deliberately taken advantage of by bad actors. The fact that the aristocratic class of England and Scotland fell for the con of the self-proclaimed prince of Poyais isn’t confusing or absurd. It’s predictable, and it’s evidence that their brains were functioning normally

Adapted from The Truth About Lies: The Illusion of Honesty and the Evolution of Deceit by Aja Raden. Copyright © 2021 by the author and reprinted by permission of St. Martin’s Press.

Aja Raden is a New York Times bestselling author. Her expertise sits at the intersection of academic history, industry experience and scientific perspective.