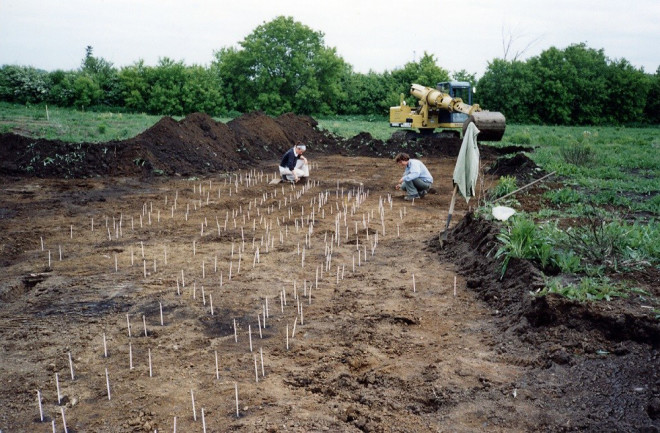 Scientists excavate the "Mantle" Native American settlement, a key archaeological site in Ontario, Canada. A new set of radio carbon dates questions the historical accounts of when Europeans made first contact with Native Americans. (Credit: Archaeological Services Inc.) A new study shows the historical dates of key archaeological sites associated with Europeans’ first contact with indigenous communities are off by nearly 100 years. The discovery “dramatically rewrites” the history of northeastern North America, researchers report today in the journal Science Advances. “It will really change how we understand the history ... of this entire period, just before and during early contact with European civilization,” Sturt Manning, a paleoclimate scientist at Cornell University in Ithaca, New York, who led the new research, said.

Archaeologists have long used the presence of European artifacts such as glass beads or certain types of metal to establish dates for Iroquois indigenous sites in upstate New York and Ontario, Canada. If a European object was a site, the imported object provided the date of the site. But, if there were no imported objects, archaeologists assumed the site must be from before Europeans arrived there. “This seemed deeply questionable in terms of logic,” Manning said. “It assumes that somehow these items are evenly traded across a vast geographic area...and that all of the relevant indigenous communities wanted to have these items.” But until now there’s been little other evidence to go on. In the new study, Manning and colleagues took advantage of a radiocarbon dating technology called accelerated mass spectrometry or AMS. AMS enabled the researchers to directly date wood charcoal and other organic matter from the historic sites.

This ceramic vessel with a human face was found at the Mantle site. (Credit: Archaeological Services Inc./Andrea Carnevale)

The scientists first tested their dating technique at a site in southern Ontario known as Warminster. Historians are reasonably confident about the date of this site thanks to a well-known French explorer named Samuel de Champlain who visited the area in 1615. When the researchers assessed the remains of a wood post at the site, they found it dated from around 1590 to 1620, “so exactly when we thought [Champlain] could have visited,” Manning said. Then the team dated three Iroquois sites that Champlain did not visit. The three locations are in the same drainage along the Rouge River east of Toronto and have little if any European artifacts. Excavators have only found one European object and a fragment of another at the third of the three sites known as Mantle, the largest fully excavated Iroquois site yet. When Manning and colleagues dated plant material from each of these sites, they found the radiocarbon evidence placed the sites 50 to 100 years later than previous estimates based on the absence of European goods. The Mantle site’s historically accepted date is approximately 1500-1550, for example, but the site dates to between 1596 and 1618 according to the radiocarbon estimate. For context, the Jamestown settlement was founded in 1607. The authors wrote that their finding implies that "Key processes of violent conflict, community coalescence, and the introduction of European goods all happened much later and more rapidly than previously assumed." “There now needs to be a major effort directed towards testing and dating a whole range of indigenous sites,” Manning said.