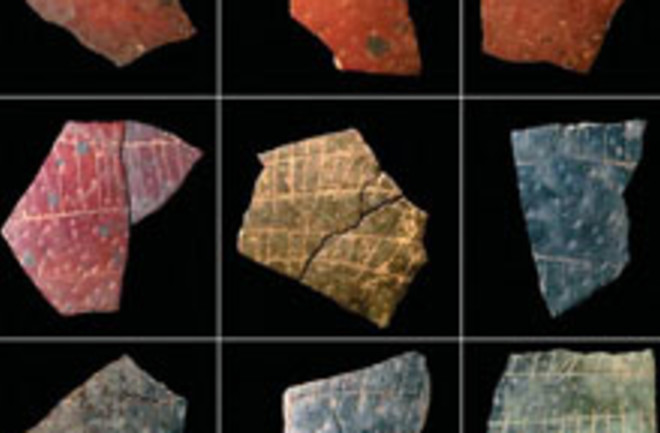 A cache of ostrich eggshell fragments discovered by archaeologists in South Africa could be instrumental in understanding how humans approached art and symbolism as early as the Stone Age. The eggshells, engraved with geometric designs, may indicate the existence of a symbolic communication system around 60,000 years ago among African hunter-gatherers

At a site known asthe Diepkloof Rock Shelter, a team led by

discovered fragments of 25 ostrich eggs that date back 55,000 to 65,000 years. In an online paper published in the

Proceedings of the National Academy of Sciences, the archeologists revealed that the eggshell fragments were etched with several kinds of motifs, including parallel lines with cross-hatches and repetitive non-parallel lines

[ScienceNow]. The scientists are confident

that the markings are almost certainly a form of messaging -- of graphic communication [BBC].

Further study of the fragments revealed that a hole had been drilled at the top of some eggshells, suggesting that the hunter-gatherers could have used them as water containers during long hunts in arid regions, as the Kalahari hunter-gatherers were known to do in more recent history. Scientists estimate that each egg could have held one liter of water. The patterns on the shells, they propose, could have been a symbolic way of acknowledging the individual who used the canteen, or which community or family the user belonged to. For scientists studying human origins, the capacity for symbolic thought is considered

a giant leap in human evolution, and [what] sets our species apart from the rest of the animal world [BBC].

These eggshells are not the first items that suggest symbolic thinking among stone age people. Archaeologists working in Blombos Cave in South Africa found

engraved red ochre, incised bone and pierced shells that were strung and presumably worn on the body—all from layers dated to 75,000 years ago; three shell beads from Israel and Algeria are said to date to more than 100,000 years ago; dozens of pieces of red ochre--many of which were ground for use as pigment--turned up in layers dating to 165,000 years ago in a cave at Pinnacle Point in South Africa [Scientific American].

But some contrary researchers have argued that early engravings and body decorations may have been done for aesthetic purposes unrelated to symbolism. Still, Texier says the Diepkloof eggshells are special, because so many fragments were found with similar designs, and because engraving the tough ostrich shells would have been a hard task--showing that the designs were not merely scratched-in doodles. The hunter-gatherers also colored their shells by baking them. Related Content: 80beats: Crafty & Clever Neanderthals Made Jewelry 50,000 Years Ago 80beats: World’s Oldest Flute Shows First Europeans Were a Musical Bunch 80beats: “Pornographic” Statue Could Be World’s Oldest Piece of Figurative Art

DISCOVER: The Dawn of Abstract Art