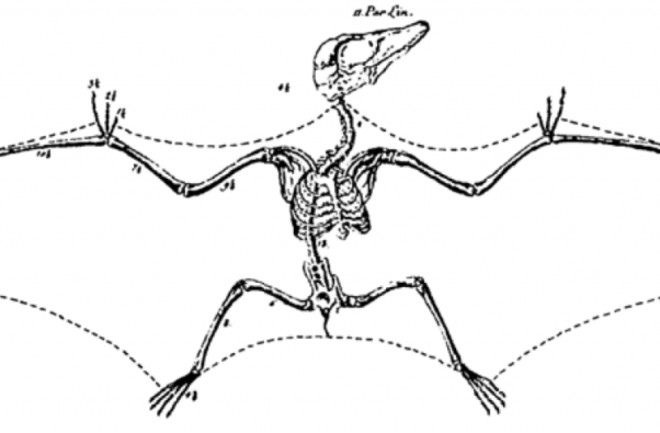 An early 19th century drawing of a juvenile pterosaur (then called a pterodactylus) shows a bat-like sprawl that is anatomically impossible. (More on this little fella below.) In fact, the authors behind a new study claim most reconstructions of these extinct animals in flight are inaccurate. But are they the ones who've got it wrong? (Credit von Soemmering T. 1817, Über einen Ornithocephalus brevirostris der Vorwelt, Denkschriften der königlichen bayerischen Akademieder Wissenschaften, Math.-Phys. Klasse 6, 89–104.) Have paleontologists just been winging it? Up to 95 percent of the hip joint reconstructions of pterosaurs and their distant relatives, the most birdlike of dinosaurs, are anatomically impossible, according to new research that used a surprising source. But the study's conclusions, counters a pterosaur expert, should be grounded. Fleshing out an extinct animal from bones alone has always been paleontology's greatest challenge, and mistakes have been made. But a paper published today makes the bold claim that the field has gotten aspects of flight, specifically hip mobility, wrong for a long time. The authors say they've developed a new way to map how pterosaurs and some dinosaurs may have taken wing. It all starts with the common quail.

The common quail, shown here in a 1914 illustration, is not the most obvious pterosaur proxy. (Credit Wikimedia Commons) The small bird may be best known for being heard and not seen, but researchers looked at it and apparently thought "huh, that's a good proxy for extinct ornithodirans." Right about now it's worth reminding everyone that pterosaurs are not dinosaurs. Both pterosaurs and dinosaurs belong to the larger archosaur tribe, but so do birds (descended from one dinosaur lineage) and crocodiles, the archosaurs still with us today. The archosaurs are typically divided into the croc-like and the bird-like, the latter group sometimes called ornithodirans, a term not fully accepted in the field. In fact, there is a lot of debate over which dead archosaurs fit where on the spectrum between crocodile and bird. For the purposes of this post, let's go with the definition of ornithodirans that the authors of today's paper seem to use, which would include birds, dinosaurs and pterosaurs. (Though it's probably worth noting that the authors focus on maniraptors, the dinosaurs most closely related to birds, rather than the entirety of Dinosauria.) Pterosaurs, meanwhile, often called flying reptiles, had tremendous diversity just within their order. They ranged from big as a bat all the way up to the famous Quetzalcoatlus, which was the size of some airplanes.

A 2015 illustration of one of the larger pterosaurs, with puny human for scale. (Credit Witton, M. P., & Naish, D. (2015). Azhdarchid pterosaurs: water-trawling pelican mimics or “terrestrial stalkers”?. Acta Palaeontologica Polonica, 60(3), 651-660) Meanwhile, back in Dinosaurland, there have been a few non-bird species believed to be capable of some kind of flight, either powered or gliding, most notably Microraptor gui, the "four-winged dinosaur" from the Early Cretaceous, 120-plus million years ago. Researchers continue to debate just how flight-y Microraptors were, but that's another topic for another day.

An artist's rendering of Microraptor. (Credit Fred Wierum/Wikimedia Commons) Unlike birds (and closely related feathered dinosaurs that may have flown), pterosaurs evolved flight along a somewhat more bat-like pathway: Their wings were membranes attached to elongated finger bones. (In bats, the membranes stretch across the entire elongated "hand," but pterosaur wings were attached to a single super-long fourth finger. Pinkie power!) So, to recap, today's study compares pterosaurs and some of the most bird-like dinosaurs, two diverse clans also very different from one another, to a quail. About That Quail... While much of the research on all these winged animals focuses on the winged bits — the forelimbs — the authors behind the new study zero in on the hip joints. They point out, correctly, that joints are integrated systems of bone, cartilage, ligaments, muscles, tendons, nerves and blood vessels — only one of which generally gets preserved in the fossil record: the bones, which tell only part of an animal's story. Dissecting a handful of adult quail, the team isolated the various parts of the hip joint, both bones and soft tissues, then mapped individual ranges of motion for each component, such as the ligaments or the bones. The authors were then able to layer different component maps, likening their system to charting countries and continents. You can show, for example, the continent of Africa with topography or with political boundaries or with both. What they found, according to the paper, was that 94.72 percent of the hip joint poses that are possible based on bones alone are actually impossible when you add the constraints of soft tissue, particularly ligaments, that would have been present in the animal when it was alive. While the authors noted that some of the bone-only poses they tested were extreme and probably would not be included in a reconstruction, they add that a lack of "consistent methodological constraints on hypothesized mobility" in the field doesn't mean someone won't try. The "bat-like" hip sprawl, for example, which has been proposed at various times for both pterosaurs and Microraptor, is possible with the quail's bones but not when you include its soft tissue constraints. As evidence that comparing a quail to a pterosaur is totally legit, the authors claim that the hip joints of birds, pterosaurs and maniraptoran dinosaurs (the dinos including and most closely related to birds, though there is disagreement on which species fall into this bunch) are "similar in several respects" such as the shape and positioning of the femoral head, or top of the thigh bone. Flight Risk I read the study a few times and, well, I had questions. A lot of them, about both its assumptions and conclusions. So I asked University of Leicester paleontologist David Unwin, a leading pterosaur expert not involved in the project, for his reaction to the paper. "On the positive side, new data is always useful, and the basic approach of this study seems fine," Unwin replied via email. "Understanding the anatomy/function of (living) birds and applying it to extinct birds/bird-like dinosaurs is reasonable, although the potential limitations of this approach needed much more analysis than given in this paper." That's the good news.

"The pterosaur component of this paper is distinctly odd. It feels like it was bolted on later and in many respects is deeply flawed," Unwin noted.

For example, Unwin continued, the bone structure around the hip joint — the pelvis and femur — is completely different for pterosaurs and birds, as several previous studies not mentioned in today's paper have established. A recent study specifically on the musculature of the pterosaur pelvis is also ignored. Added Unwin: "There is no reason to suppose, therefore, that ...the ligaments and soft tissues of pterosaur and bird hip joints are comparable, in which case the arguments made by the authors regarding soft tissue constraints on the orientation of the pterosaur femur are invalid."

Unwin called the authors' approach "baffling," including their use of the 1817 juvenile pterodactylus illustration (seen at the top of this post) which was long ago dismissed as inaccurate. "The authors repeatedly refer to a ‘bat-like pose’ for pterosaur hind limbs. Why? This idea was abandoned decades ago," he added.

There were other omissions, noted Unwin. The authors don't acknowledge the debate over whether pterosaurs even were ornithodirans, nor do they address the hundreds of fossils — and thousands of pterosaur tracks — that contradict the study's conclusions.

"Overall the paper seems completely outdated with regard to pterosaurs, using a terminology and understanding that seems rooted in the 1980s," Unwin concluded. "A great deal more fossil material has been found over the last 35 years and ideas have moved on a long way – this paper hasn’t. Indeed one might ask why were pterosaurs included in this paper at all?"

A Diamond In The Ruffled Feathers

As in any field of science, in paleontology, hypotheses are put forth and tested and revised and, eventually, consensus emerges. Even the consensus may get scrapped and rewritten if sufficient, credible counterevidence turns up. But the study out today is not going to rewrite any textbooks. It does offer a new way to map an extinct animal's potential ranges of mobility, a method that may, once more broadly tested with a variety of proxies, provide a more accurate and detailed picture of how the animal actually got around. And that would be a terrific addition to the paleontologist's tool kit. The true value of the research is buried, however, in a strange refutation of dated ideas long ago refuted, and a curious crunching together of disparate animals. As any eight-year-old can tell you, Quetzalcoatlus was no quail. The study

appears in Proceedings of the Royal Society B: Biological Sciences.