Enormous bacterium uses thousands of genome copies to its advantage

They say that size doesn't matter, but try telling that to bacteria. Most are very small, for they rely heavily on passive diffusion to ferry important nutrients and molecules across their membranes. To ensure that this happens quickly enough, bacteria need to ensure that their surface area is large enough relative to their volume - become too big and they won't be able to import enough nutrients to support their extra size.

These constraints greatly limit the size of bacteria. The larger ones solve the problem by being extremely long and slender, or by using an internal compartment called a vacuole to push their insides to their outer edges. But even these solutions have their limits, and the simple fact is that most bacterial cells are far smaller than those of the more complex eukaryotes - a group that includes all known animals, plants and fungi.

But one group of bacteria - Epulopiscium sp. - flouts this rule. It has developed a genetic trick that allows it to grow to (relatively) gigantic proportions. While a typical bacterium like Escherichia coli is a mere 2 micrometers long, Epulopiscium can grow up to a length of 300 micrometers. That's not much smaller than the full stop at the end of this sentence and certainly comparable to most eukaryotic cells. And the secret to its mammoth size? DNA, and lots of it.

Jennifer Mendell from Cornell University studied the Epulopiscium by working in the lab of Esther Angert, who first identified it as a bacterium in 1993. Angert's lab had previously shown that the colossal bacterium contains a large quantity of DNA concentrated near its membrane, and Mendell wanted to work out how much.

But doing that wasn't easy. When it comes to choice of home, Epulopiscium redefines the word 'picky', for it only lives in the intestines of surgeonfish. Different species colonise different fish and Mendell worked with one that lives only in the guts of the bulbnose unicornfish. While most microbiologists can culture their subjects, Mendell had to collect hers by spearfishing in the Great Barrier Reef and with these samples, she managed to measure the amount of DNA in over 10,000 Epulopiscium cells.

Most bacteria reproduce by splitting in two or budding off daughters but Epulopiscium produces offspring in a way that's a lot like a live birth. It grows two daughters inside itself, until they fill the mother cell entirely and burst out of it. These larger, mature cells contained about 250 picograms of DNA, while the smaller, immature ones contained about 85 picograms. That's still a huge amount - a typical human cell only contains about 6 picograms. 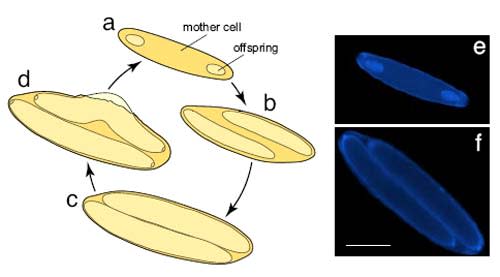 It's unlikely that all that DNA belongs to a single, massive genome because only a small amount is passed onto each daughter. Epulopiscium may be enormous but its genome is fairly standard in size for bacteria - it just has many copies of it.

Mendell demonstrated this by measuring the frequency of three bacterial genes that are always found once per genome. She found that the large cells contained an average of 41,000 copies of each of these genes for every 156pg of DNA, implying that every cell contained tens of thousands of genome facsimiles! This strategy of having more than two copies of the same genes (as humans do) is known as "polyploidy".

What use could the bacterium have for so many copies of its genome? Mendell offers several answers. For a start, the multiple copies allow it to tolerate significant genetic mutations that would kill most other bacteria. Having more genetic material also allows a cell to become much larger, and being big has its advantages. The bacterium can travel to parts of the gut that are richest in food, and it's so large that predatory cells that would eat lesser bacteria find it too large a mouthful.

Epulopiscium's lifestyle also provides a clue. It is a symbiont, a bacterium that lives in harmony with its fishy hosts. In their intestines, it finds a constant stream of warm, nutritious fluid and in return, it pays its landlord by secreting valuable molecules. If this molecular rent provides the fish with a survival advantage, the bacterium benefits too and will experience a strong evolutionary pressure to provide its host with even more.

And indeed it does - it produces very high numbers of molecular pumps that shuttle proteins out of its borders. The extra genetic material helps it to do that, and Mendell thinks it's no coincidence that many other symbionts also carry duplicated genomes (albeit not to the same extent).

The bacterium's extra genetic material is dotted around its edges, near the cell membrane. This means that new proteins can be created and directly fed into the membrane without any transport problems, in the same way that a retailer can minimise shipping delays by having multiple warehouses dotted around a region rather than a single central depot. This division of labour allows a single Epulopiscium cell can act as a colony with different parts responding independently to local conditions.

Many of these advantages - large size, mobility, defence against predators - are typically found in large eukaryotic cells or even multi-celled organisms. By accumulating thousands of copies of its genomes and redistributing them effectively, Epulopiscium has achieved all of these benefits through a completely different route. It's another testament to the wondrous diversity and abilities of bacteria.