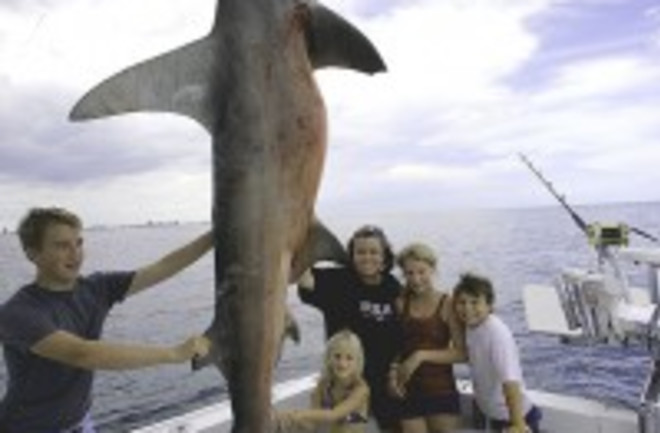 The smiling family and their catch—a large great hammerhead. Photo from MarktheShark.com This past week was supposed to be a happy week for Rosie O'Donnell. She was ecstatic to announce that she's re-hooked her old job on The View, and will be joining its cast next year. But instead, Rosie is being scrutinized for a different catch—one made two years ago. In early 2012, photos began circulating of Rosie with Mark the Shark, a notorious fisherman who pompously claims he has killed over 100,000 sharks. Dangling in the foreground is a great hammerhead, the largest of the hammerhead species and one listed as endangered on the IUCN Red List since 2007 (prior to that they were 'data deficient'). Rosie was immediately and loudly criticized for the act, as the species had newly become protected under Florida law. Rosie did not respond well to the critique. "chill people - really - my family fishes" she tweeted  to those calling for an apology for her actions. In response to one tweeter, she classily replied "it was years ago asswipe - b4 they were on the endangered list". After the recent resurgence of the story due to a Slate article by widely acclaimed shark scientist and conservationist David Shiffman, Rosie stuck to her guns. "before hammerheads were illegal - my daughter caught one - end of story" she tweeted. Or, to phrase her argument simply: the animals weren't "endangered" when her family caught them, so back off.

@alexbvollmer - Alex when we caught the shark - hammerheads were not endangered - r u against fishing of all kinds — Rosie (@Rosie) July 11, 2014

She's right, in a sense—great hammerheads and most other sharks are not listed under the Endangered Species Act (ESA). Only one shark is currently listed, and that is the scalloped hammerhead (Sphyrna lewini). It is not illegal to kill a great hammerhead in federal waters, which is exactly why Mark the Shark is still has a business catching large ocean predators. But whether an animal is listed under the ESA and whether that animal is endangered are completely separate. The definition of the term "endangered" has nothing to do with US regulations, or even international listings like the Convention on International Trade in Endangered Species of Wild Fauna and Flora (CITES) or the International Union for Conservation of Nature (IUCN). A species or population is endangered if it is on the brink of extinction. Period.

Endangered is endangered, whether we recognize it or not. When biologists call a species "endangered", we're not referring to some legal status of protection. That's not what endangered means. Endangered means that the species or population is at risk—that its numbers are low, its growth rates slow, and its ability to bounce back after human impacts of any kind is weak. Scientists discover that a population or species is vulnerable through the collection of data on its abundance, trends in growth or decline, and predicted resilience, and often, these data are compiled to create a general threat level in the IUCN's Red List. But a species doesn't have to be listed, even by the IUCN, to be endangered. Many of the "data deficient" species on the IUCN's Red List are still probably endangered—we just don't have the numbers to show it yet. Endangered is a state of being, whether a given regulatory agency, intergovernmental body, or country decides to recognize it. Species that are endangered are struggling to survive. There aren't as many of them. They don't live in the areas they once roamed. Their genetic diversity is much lower than it once was, leaving them vulnerable to an ever changing environment and at risk for pandemic disease. They can't sustain losses that once would have been considered small. They're literally fighting for their lives, their very continued existence on this planet. And in many cases, the difference between that and extinction is in our hands. Not all endangered species are protected, and even those that are aren't protected everywhere. The fact is, as a global human population, we kill lots of endangered species legally every day. Six of the seven species of sea turtle are listed as one of the three categories used for plants and animals that are facing a higher risk of global extinction by the IUCN Red List (the last is data deficient) and all that are found in US waters are listed under the ESA, yet worldwide, more than 40,000 of them are killed legally every year. Australia, Japan, and Mexico are among 42 countries that don't recognize these animals as endangered and allow them to be hunted legally. Lions? IUCN says they're vulnerable. The IUCN estimates that lion populations have plummeted by 30% in the last twenty years, yet you can legally kill them in many African countries, and in South Africa, they are specially bred for captive or "canned" hunting by tourists. Even a flagship conservation icon—the polar bear—isn't out of reach of hunters. Though listed as vulnerable by the IUCN, threatened by the ESA, and depleted under the Marine Mammal Protection Act, you can still legally hunt them in some parts of Canada.

Rosie 'and the boys' amongst dozens of shark jaws caught and killed by Mark the Shark. Photo from MarktheShark.com There is no doubt that hammerhead sharks in general are in trouble, including the great hammerhead Rosie caught. The IUCN Red List places great hammerheads solidly in the endangered category, saying that although numbers are hard to pin down, it's likely the species has declined by 80% in the last 25 years. Like many top predators, hammerhead sharks live long lives and reproduce slowly, making them highly vulnerable to fishing pressure and other threats. Rosie isn't the only woman to come under fire lately for legal hunting of endangered species. Nineteen year old Kendall Jones has come under attack for hunting lions and other threatened animals—all legally, to my knowledge—and the threats have gotten so vicious that one hopeful congressman even tweeted that he would pay $100,000 for nude pictures just to shame her (which, for the record, is FLAT OUT DISGUSTING AND WRONG, no matter what animals she has or hasn't killed). But Kendall describes herself as a "conservationist".

Let's see pictures of your most prized trophy and hashtag it with #supportkendall ready, set, GO!! — Kendall Jones (@_Kendalljones_) July 8, 2014

There is plenty of evidence that such behavior is ecologically damaging. Reducing numbers of already threatened species further ensures their demise. It may not take much to push the great hammerhead or any of the currently-endangered species into the IUCN's final category: extinct. Even if these species can survive these individual acts, the overall practice of trophy hunting has clear negative effects. Trophy hunting has lasting evolutionary impacts, like decreased horn size in rams or decreased overall sizes in fish. While Kendall defends her hunts saying species like lions 'need to be killed for conservation', studies have found that hunting apex predators—even in areas of relative abundance—doesn't just lessen their numbers, it undermines the ability of those that aren't killed to function in the ecosystem. When the delicate web of interspecies interactions is torn apart, the effects ripple outward. We know that the decline of sharks is having adverse impacts on the oceans—impacts that are already being felt in our fisheries. While conservation law can be messy and complex, the effect of hunting rare top predators is simple: it's bad for the environment. Yet Rosie and others still stand behind the idea that what they have done shouldn't be challenged simply because it isn't illegal. Ultimately, the question is a moral one: is it wrong to kill an animal whose species is near extinction if your country does not protect it? Is it ethical to contribute to ecological decline when such actions could be easily avoided? Are your entertainment and pride worth more than entire species, or even entire ecosystems?

The proud angler. Photo from MarktheShark.com As a celebrity, Rosie's actions carry weight. They set an example for thousands of fans. Rosie had the chance to learn from her actions, to educate herself on the effects of trophy fishing and even—*gasp*—admit she did something fishy that she shouldn't do again. Instead, she continues to defend her ignorance ferociously, regurgitating over and over that it wasn't "endangered" without any concept of what that word really means. Though many have offered to politely discuss the topic with Rosie, their pleas have fallen on deaf ears. Instead of listening to critique, she has acted like a petulant child, sticking her fingers in her ears and screaming "NAH NAH NAH I'M NOT LISTENING." You don't get let off the hook on this one, Rosie, even though it was "years ago"—not because of what you did, but because of your actions since. You have had ample opportunity to learn and grow, and you have chosen to remain ignorant and defensive. We all make mistakes, Rosie. "To err is human," as the saying goes. But our character is defined by how we learn from those errors, and sadly, as far as I can tell, you have learned nothing.