Elephant Bird's Tasty, Giant Eggs Were Most Likely Its Downfall 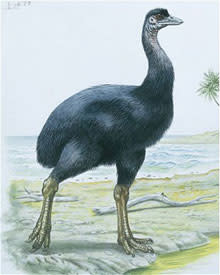 The extinct elephant bird could grow to over ten feet tall and weigh in at around half a ton, with its eggs about 180 times the size of a chicken egg. They lived well in Madagascar until about 2,000 years ago, when humans first settled the island; then, about 1,000 years later, they were extinct. In an upcoming documentary, Sir David Attenborough says it wasn't the skill of human hunters that caused the big bird's demise:

"I doubt it was hunted to extinction – anyone who has seen an ostrich in a zoo knows that it has a kick which can open a man's stomach and an enraged elephant bird, many times the size of an ostrich, must have been a truly formidable opponent."

Instead, he says, humans probably killed off the elephant bird by eating all their eggs---someone stumbling on a nest and stealing one of it's calorie-rich eggs could keep their family happy for several meals. Attenborough discovered the egg shells on a visit to Madagascar in the 1960's. For the documentary he returns to the area which has changed dramatically in the 50 years since then, he told The Telegraph

"I go back to a place where there was forest 50 years ago when I was there and it has all been knocked down the only thing that is there is an abandoned saw mill. It was sad to go back and see that. It is an example of the way the island has changed over the years. There are now three times as many people living on the island since I was there 50 years ago. The only places they can live and grow food were the only places that were wild. The wild places are being taken over by people building villages on them and rice fields."

More information from Attenborough on giant birds in the video below. Attenborough and the Giant Egg will air on BBC Two in 2011. Related content: 80beats: The Complicated History of the Domesticated Turkey

80beats: How Did the Giant Flying Reptiles of the Jurassic Period Take Off?

Not Exactly Rocket Science: DNA from the largest bird ever sequenced from fossil eggshells

Not Exactly Rocket Science: Argentavis, the largest flying bird, was a master glider