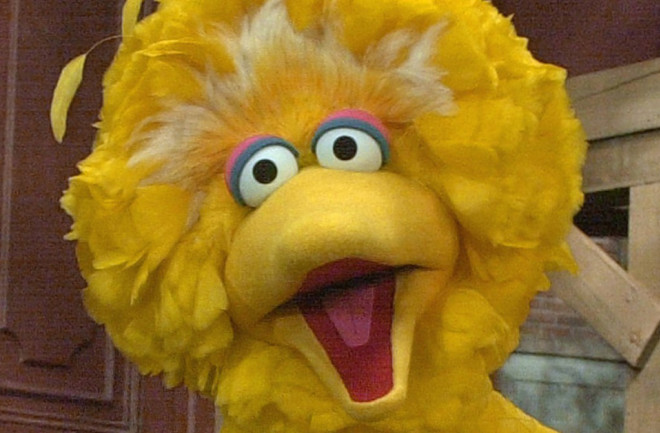 Sesame Street's beloved Big Bird has an official height of 8-feet-2-inches, but that's nothing compared with an extinct elephant bird that researchers say was the size of a sauropod dinosaur. (Credit: Sesame Street)

There’s Big Bird and then there’s really big birds. The elephant birds of Madagascar, which went extinct about a thousand years ago, have long been counted among the largest birds ever to walk the planet. But a second look at the bones they left behind has led researchers to rethink the birds’ family tree — and just how big they got.

Before we get into details of the new research, here’s the tidbit I know you want: Newly designated species Vorombe titan, an extinct flightless bird from Madagascar, is the new heavyweight bird champion of the world, weighing on average an estimated 650kg (more than 1,400 pounds for you Imperial holdouts).

One incomplete V. titan specimen analyzed in the new research was significantly bigger, and may have tipped the scales at 860kg, or nearly 1,900 pounds. As the authors behind today’s paper helpfully note, that’s as big as some sauropod dinosaurs. Okay, the smaller sauropods, such as Magyarosaurus, but still. That’s a big bird.

Cleaning Out The Chaos

The size of V. titan could be appreciated only after researchers did some serious cleaning up of the messy elephant bird backstory.

Back in the mid-19th century, paleontologists and naturalists got all worked up over massive bird bones and eggshell bits turning up on Madagascar. For several decades, the zeal for collecting these remains was matched only by the enthusiasm for classifying new species based on often highly subjective, even downright sketchy interpretations. That’s not to suggest all of the science was bad, but rather that the analysis was qualitative, per the dominant approach of the time.

More than a dozen species spread over three genera of elephant bird were eventually described, though different researchers each devised their own elephant bird family tree. At least one species was described solely from eggshell fragments. Several others were classified by comparing, say, a femur to a toe, and by borrowing, inexactly, a system developed to assess New Zealand’s moa, another famous extinct bunch of ratites (generally large, flightless birds).

Because few complete skeletons were found, the zealous collectors mashed-up unrelated bones, frequently with an eye towards creating the most impressive museum display.

As a more quantitative, mathematical approach to defining species and their connectedness spread through paleontology, the elephant birds of Madagascar somehow got left behind. Remarkably, according to the authors behind today’s study, their data-driven analysis is the first time anyone has looked seriously at elephant bird species classification in more than half a century.

To bring order to chaos, the team collected precise measurements from hundreds of elephant bird bones spread across the world’s museums. They then used the information to determine, through a series of sophisticated statistical analyses, how the different specimens were related to each other.

Their result: The data supports only three genera total. Of those, one genera (Aepyornis) has two species and the other two genera (Mullerornis and Vorombe) have one apiece, for a total of four species.

From Champ To Second Banana

You might have heard of Aepyornis — it turns up at the top of a lot of “biggest bird ever” lists and even shared screen time with David Attenborough. The truth is, however, Aepyornis was a bit of a dumping ground genus, with collectors assigning to it everything they couldn’t clearly classify.

By separating hard data from the fiction and folly of overzealous collectors, however, the researchers found that the existing Aepyronis genus should be applied to the middle-sized elephant birds (which were still pretty big). The largest specimens once thrown into the Aepyornis bin, however, possessed enough anatomical variation to be considered a separate genus, so the team named them Vorombe, from the Malagasy word for, yep, “big bird.”

The study appears today in Royal Society Open Science. which, as its name suggests, is open access, so take a read. There’s plenty more waiting for you, including how the three genera may have been distributed across the island.

The skeleton and egg of a Madagascar elephant bird described as Aepyornis in a 1913 engraving by Monnier. (Credit: Wikimedia Commons)

The skeleton and egg of a Madagascar elephant bird described as Aepyornis in a 1913 engraving by Monnier. (Credit: Wikimedia Commons)