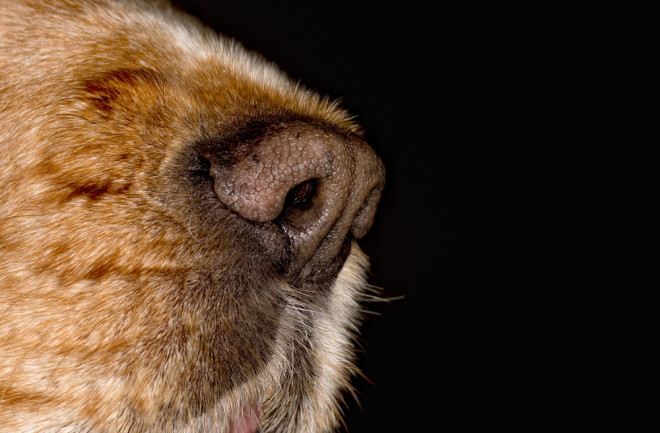 A dog’s nose knows best, even in the digital age.

By now you’ve probably heard about the downfall of former Subway spokesman Jared Fogle, who has said he will plea guilty to having paid minors for sex and having obtained child pornography. But an interesting factoid of the case is that justice was served thanks to dogs trained to sniff out electronics. From iPads to tiny memory cards, these dogs with a rare talent are finding themselves in high demand in an era rife with cyber crime.

There are just three dogs in the United States trained to find electronic components with their noses. Bear, an electronics-sniffing black lab, helped officers locate 16 smartphones, 10 flash drives and six laptops during an 11-hour search last month of Fogle’s home. How are dogs able to find what to the rest of us has no smell whatsoever?

For some insight, we can look to Jack Hubball, a chemist who discovers the chemical compounds that dogs are eventually trained to find. He identified the so-called accerlerants (gasoline, diesel, kerosene, etc.) dogs should focus on to sniff out arson, and helped train dogs to find narcotics and bombs.

To fight computer crimes, Hubball tested circuit boards, flash drives and other electronics components to isolate a single common chemical in each device, which police are keeping under wraps. After isolating the chemical, it was a matter of homing dogs’ sniffers onto the telltale compound, as Bloomberg reported:

After months of training, the dogs were able to detect the odor of the chemical in people’s hands, concrete blocks, metal boxes and clothing. The dogs also had to ignore distracting smells such as food and coffee.

The dogs have since been involved in numerous child pornography warrants, as well as other investigations where electronic documents were key evidence. After helping with the Fogle investigation, Bear’s trainer says he’s received some 30 inquiries from police who want to buy their own electronics-sniffing dog, the International Business Times reports.

Apart from electronics, dogs are putting their noses to work in a multitude of disciplines – from fighting crime to diagnosing diseases. In one of the largest studies of its kind, dogs detected the presence of prostate cancer with 98 percent accuracy in the urine of 600 test patients. Dogs can also detect lung cancer simply by sniffing patients’ breath. Dogs have been used to sniff out bed bugs, explosives, dead bodies, contamination in water and more.

In other words, if something smells fishy, it may be time to call on man’s best friend to lend a helping hand — or snout.