Cryoconite holes in the world’s glaciers harbor miniature environments that could vanish as the slabs melt away. 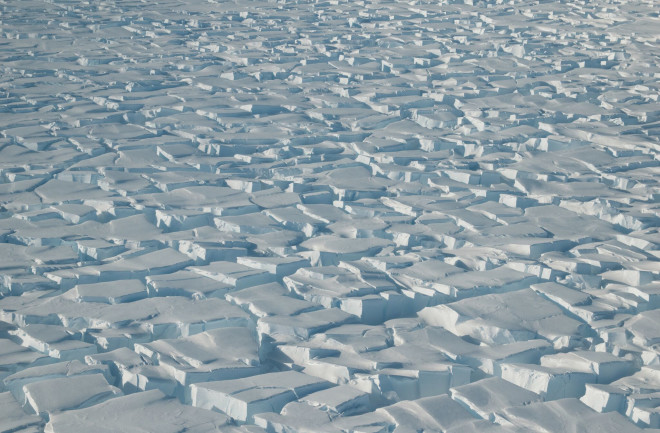 Joseph Cook took to the ice to learn about the polar ice caps of Mars, but he found something almost as otherworldly on Earth. For his graduate research in glaciology, Cook’s plan was to study depressions on glaciers as a way to learn more about mysterious Swiss-cheese pits in Martian ice. But, he says, once he began exploring the holes in 2009, “I was hooked.”

It’s easy to understand Cook’s fascination. Each hole is its own tiny world, an ecosystem unto itself that supports a host of life-forms, including tardigrades — or water bears — and other small organisms. These water-filled divots develop when dark grains of bacteria-specked dust collect on a glacier or ice sheet and absorb heat from the sun. The granules, called cryoconite, begin to melt the ice, forming cylindrical wells 1 to 50 centimeters wide. The grains settle into a layer of cryoconite sediment on the bottom.

Cryoconite holes appear on glaciers all over the world, from Antarctica to Greenland to the Himalayas. But climate change threatens many of these slabs of ice, and as they melt, the distinctive divots they harbor are vanishing, too — just as scientists are beginning to understand them. And the cryoconite organisms themselves may be speeding up the process. “They may well be catalysts of their own demise,” says Cook, of the University of Sheffield.

Cook and other scientists aim to figure out how these miniature ecosystems work — and their role in glacial melting — before the ice disappears.

An Oasis on Ice

Cryoconite was discovered in the late 19th century, when polar explorers noticed the dark grains while trudging across the ice. They realized the dust was melting holes into the glaciers. But it took another century for scientists to begin to understand what cryoconite is made of, and what lives inside cryoconite holes.

In the mid-1990s, Nozomu Takeuchi set out to understand the makeup of cryoconite. He split open granules from the Canadian Arctic and put them under microscopes. Takeuchi, now at Japan’s Chiba University, saw that the core of each cryoconite grain is a mass of mineral bits, assorted bacteria and organic material the bacteria have produced. The outer shell of the granule is a living layer of cyanobacteria, a type of bacteria fueled by photosynthesis. Their filaments hold everything together in a tight-knit sphere. “It’s very beautiful actually,” Takeuchi says.

Building on Takeuchi’s findings, scientists realized that the grains form when airborne mineral particles are ensnared, along with other debris, in the sticky arms of cyanobacteria.

Takeuchi wondered how old these odd melds of mineral and life were. He noticed that each summer, the growing cyanobacteria seem to create a new layer on the granule. The layers could then be read to reveal the age of the cryoconite, much like tree rings. In studying the rings on one Chinese glacier, Takeuchi found that most of the granules were between 3 and 7 years old, while others may last just a year or two.

As Takeuchi picked apart the grains, other scientists pieced together how they form their own ecosystem. They found that despite their small size, the organisms stitched together in the cryoconite orb are not passive residents of the ice. When cryoconite particles carve out a melt hole in a glacier, they create a new environment: a habitat where they and other organisms can reside. “I see them as ecosystem engineers,” says Cook.

Krzysztof Zawierucha, a biologist at Poland’s Adam Mickiewicz University in Pozna, is among the scientists exploring the food web within a melt hole. In addition to the microbes tangled together in the granules, they’ve found that the watery oases also house other bacteria, algae, fungi, single-celled animals called protozoans, and even tiny invertebrate animals including insect larvae, worms and various tardigrades.

These species are made for this frigid, ephemeral environment. Their special adaptations, including the antifreeze proteins that some of the bacteria make, may hold promise for medical applications, such as preserving blood and organs. And these organisms’ ability to live in extreme environments could teach us about the types of life we might one day find elsewhere in the universe. “I dream about studies on the freeze-avoiding strategies of these micro-animals,” Zawierucha says.

Intrigued by the wide variety of bacteria — a hundred species in each hole — some researchers are using DNA and RNA analysis to characterize them. But they struggle to grow the finicky microbes back in the lab, where they could more easily figure out their ecosystem functions. As glaciers disappear, they may be running out of time to study these organisms.

Life at the bottom of a cryoconite hole is dark. The chocolate-colored bacteria inside each granule produce black or dark brown organic matter, and certain larger animals in the cryoconite holes, such as black tardigrades, are also dark. These pigments protect against the damaging effects of solar radiation, but as Cook discovered, they also give cryoconite grains impressive ice-carving powers.

On the glaciers of Svalbard, he added extra cryoconite sediment to existing holes to see what would happen. He found that the granules spread out as much as possible, forming a thin layer. The dark layer of cryoconite and the creatures in the hole absorb sunlight, warming the walls around them and melting a wider hole. “What’s really amazing is that a cryoconite hole can change its shape,” he says.

The advantages of this habitat build-out are many, Cook found in a 2010 study. With the grains more widely distributed, more of the grains’ surface area is exposed to sunlight, and the additional meltwater lets the glacier host more life.

But with the arrival of human-caused climate change, this age-old cycle now has a dark side. The very mechanisms that have allowed cryoconite organisms to thrive may be exaggerating the threat of global warming and aiding in the destruction of their own home. What’s more, dust freed from within glaciers as the ice melts can seed new cryoconite granules, says Andy Hodson, who studies glacier ecology at the University of Sheffield.

But dust is tiny, and glaciers are huge. How big of a problem can all this granule activity be in the grand scheme of things?

A cryoconite granule forms when mineral particles and organic matter, such as bits of algae, are captured by cyanobacteria. (Credit: Nozomu Takeuchi)

According to Cook, the darkening effect of cryoconite may be significant on a global scale. He and other researchers are also exploring how glacial life affects the planet’s carbon dynamics. On large, stable glaciers, Cook says, cryoconite holes seem to capture carbon — the photosynthesizers in the holes guzzle it out of the atmosphere. But on less stable ice sheets, where cryoconite doesn’t have time to settle into thin layers, its carbon dioxide consumption may be outweighed by the release of the greenhouse gas by other microbes. Ice that’s shifting and melting may put more carbon into the atmosphere than it removes.

Overall, Cook says, it’s likely that cryoconite is amplifying the effects of climate change. This is already evident in Greenland. Takeuchi says that in the past several years the Greenland ice sheet — which holds 10 percent of Earth’s ice — has become strikingly darker and dustier. Formerly clean, white ice is now covered in cryoconite. It used to be found only inside holes, but now it’s scattered across the surface of the ice. Scientists are trying to figure out what’s driving this shift, but it seems clear that “some balance is changing,” Takeuchi says.

For Cook, these complex, delicate pockets of life have become far more than an alien-like curiosity.

“This is something really ecologically important,” he says. “This isn’t just innocuous, benign dirt.”

This article originally appeared in print as "Into Thin Ice."