Humans are a funny lot. While we seem to be relentless voyeurs, we generally frown on eavesdropping as an invasion of privacy. But in the animal world, eavesdropping can be a matter of life or death. Animals rarely communicate in isolation. Often it pays for one species to monitor the dialogues of others, particularly when predator warnings are involved. 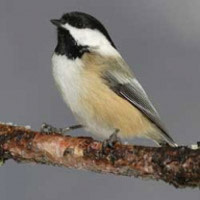 Small animals in particular do well to pay attention to the alarms of other species, as they are often preyed upon by the same larger hunters. Even very unrelated species can listen in and understand each other's signals. Vervet monkeys respond to the alarm calls of superb starlings, while mongooses are well-versed in hornbill calls.

Alarm calls aren't just a simple matter of shouting "Look out!", and many species have different calls for different predators. But one of the most sophisticated alarm systems so far discovered is used by a small, unassuming bird called the black-capped chickadee.

The chickadee acts as an inadvertent sentry for a multitude of bird species. Its name comes from its distinctive "chick-a-dee" alarm call, made in response to a perched bird of prey or a land predator. When this call sounds out, anywhere between 24 and 50 species of bird marshall together and mob the predator, robbing it of the element of surprise and harassing it from the area. 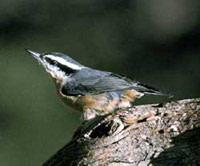 The chick-a-dee call is not a blunt warning, but a sophisticated piece of communication. By varying the acoustics of the call, the chickadee can warn others about not only the type of predator, but also its potential threat and size. Smaller raptors, with their superior maneuverability, pose a greater danger to small birds and must be dealt with more carefully. When these hunters are near, the birds warn of their presence by shortening the gap between chick and dee, and add extra dees to the end.

Now, Christopher Templeton and Erick Greene from the University of Washington have found that other birds have learned to appreciate the subtle differences in the chickadee's calls. They recorded two variants of the chick-a-dee call, by exposing the birds to two species of owl, one large and one small, in controlled encounters. They then played the calls back to red-breasted nuthatches - common flock-mates of chickadees - from a speaker hidden in a tree. As predicted, the nuthatches mobbed the speaker in response to both calls.

But on closer inspection, they were clearly picking up on the greater threat suggested by the subtly different small-predator call. When that was played, they mobbed more frequently and for longer, approached the speaker more than twice as closely, showed more wing-flick displays (a sign of agitation), and were themselves more likely to call.

Conserving their energies for only the most dangerous predators could bring great benefits to the nuthatches, especially in winter, when they are most likely to be found in the company of chickadees. Their food sources are scarce, and keeping warm saps valuable energy. Understanding the subtle differences in the chickadee dialect could help them save their energy for the times of greatest need. Templeton and Greene's study shows that animals can pick up a surprisingly complex picture of their environment by listening in on other conversations.