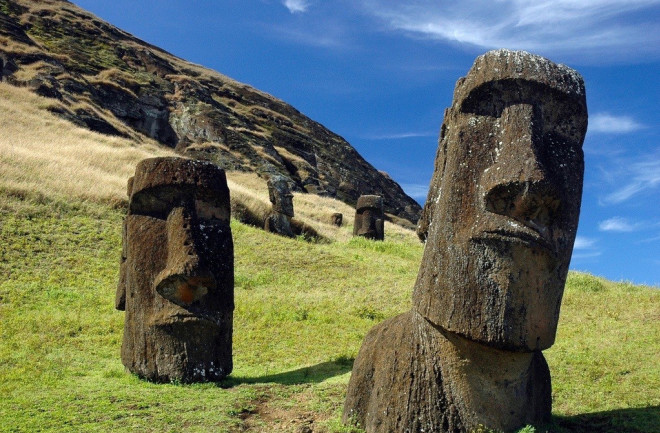 Thanks to its geography, the southeastern Pacific island of Rapa Nui — also known as Easter Island — has been in the center of a long-running debate about how early people may have sailed back and forth across the planet's biggest ocean. One theory suggested that, long before Europeans arrived, the island was a meeting point for Polynesians and Native Americans. Spoiler alert: a new study of ancient DNA from early residents of Rapa Nui says otherwise.

Easter Island, known for its moai — massive human figures erected all over the small island — has long held fascination for travelers and researchers alike. Archaeological evidence suggests that the island was first settled by Polynesians, perhaps less than a millennium ago. Europeans didn't show up until 1722, and the centuries between the arrival of its first residents — known as Rapanui — and a ship of Dutch explorers have held particular interest for scientists studying human migration.

Some researchers have suggested that the island's location — roughly halfway between Tahiti and South America — would have made it a logical rest stop on (theoretical) prehistoric trans-Pacific travel routes, and a potential genetic melting pot for Polynesians and Native Americans. That theory got a boost in 2014 when a team found genetic evidence of Native Americans mixing it up with Rapanui well before Europeans were on the scene.

That 2014 paper, showing modern Rapanui DNA has about 8 percent Native American ancestry, made headlines. But the study was conducted using genetic material from 21st century residents of the island. The conclusion that Native American DNA was added to the mix 19-23 generations earlier (sometime in the 13th to 15th centuries) was based on modeling, an area of genomics that can be imprecise.

Today, however, a separate team reports in Current Biology that ancient DNA, from five Rapanui discovered on Easter Island during archaeological excavations, tells a different story. The researchers obtained and sequenced genetic material from three individuals dated to the pre-European period (from the 15th to 17th centuries) and two more from the 19th to 20th centuries. The team was able to sequence the entire maternally-inherited mitochondrial genome (mtDNA) from all five individuals, and also retrieved significant portions of autosomal DNA, or genetic code that's found on the non-sex chromosomes.

The data is the first genome-wide glimpse into ancient Rapanui lineage. The result: None of the samples showed evidence of Native American ancestry.

Just as many people poo-poohed the 2014 paper that hinted at a pre-European contact DNA mash-up between Polynesians and Native Americans, I'm sure a lot of people will dismiss these findings. And it's not an iron-clad case. As the researchers themselves point out, all of the genetic material had some degree of degradation due to age and environment — ancient DNA preserves best in cold and dry climates and Easter Island is neither. For that reason, the team was unable to sequence the entire genome of any of the individuals analyzed.

It's also possible, though unlikely given Rapa Nui's small size, that the team's sample of five individuals just happened not to include any Rapanui who did have Native American ancestry. It appears most likely, however, that prior to the arrival of Europeans, local Rapanui did not have interaction with Native Americans. The admixture events, to use geneticist lingo, could have occurred with individuals of either Native American or mixed Native American and European heritage who visited the island after 1722.

The team notes that historians have documented that at least 53 ships stopped at Rapa Nui in the first 140 years after Dutch explorers came ashore — and that doesn't count landings by whaling ships which typically were not recorded.

But why, you may wonder, did the 2014 paper place the Native American-Rapanui admixture event as early as the 13th century? Well, modeling an ancient admixture event is tricky, and results can get skewed in a number of ways. One potential monkeywrench in the 2014 paper's modeling is an apparent bottleneck event on Rapa Nui in the late 19th century: An outbreak of disease wiped out much of the indigenous population, leaving as few as 100 Rapanui.

Today's research clears up some of the backstory of the first residents of Rapa Nui ... backstory ... get it? (Credit Terry Hunt)

These "bottlenecks," in addition to being a human tragedy, wreak havoc with genetic models, which are based on relatively stable population sizes. Toss in a sudden and extreme decrease in a population's genetic diversity — a bottleneck — and the chronology of when genes were introduced into that population (the admixture event) can get distorted.

For now, based on this latest data, it looks like advocates of an early trans-Pacific travel route and Polynesian-Native American contact will have to look elsewhere for evidence to support their claim.