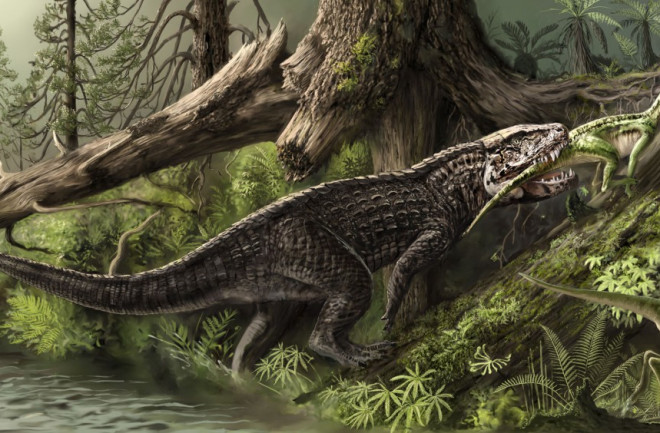 At several times in Earth’s history, mass extinctions have come close to wiping life out altogether. The reasons for these catastrophes are still unclear – they’ve been blamed on everything from asteroid impacts to cosmic ray blasts. But a new study has found that our planet itself could have a surprising hand in these disasters.

Research recently published in Earth and Planetary Science Letters suggests that reversals of the Earth’s magnetic field may have sparked mass extinctions in the past by stripping oxygen from the atmosphere.

The Earth’s natural magnetic field, generated in the liquid outer core, spontaneously changes direction every 500,000 years or so. Known as geomagnetic reversals, these processes cause the field’s north and south poles to swap places.

Normally, the Earth’s magnetic field acts like a shield around the atmosphere, protecting it from the damaging effects of the solar wind (the supersonic stream of charged particles emitted by the sun​). During a geomagnetic reversal, however, the field weakens dramatically, exposing the atmosphere to the full force of the solar wind – and causing oxygen ions to be stripped off into space.

This much was already known. But in the recent study, a team led by Yong Wei of the Chinese Academy of Sciences set out to discover if the oxygen lost during geomagnetic reversals could bring about mass extinctions.

Wei and colleagues focused on the “Triassic-Jurassic” mass extinction of 200m years ago, in which up to 84% of all species on Earth perished. Independent studies had already shown that, during this extinction, the geomagnetic reversal rate doubled, and the amount of atmospheric oxygen simultaneously dropped by 9 percent. This oxygen drop is one of the possible reasons for the extinction.

Using a computer model, Wei and his team concluded that geomagetic reversals stripped at least 218 trillion tons of oxygen from the Earth’s atmosphere during the Triassic-Jurassic extinction – or 4.5 percent of the total amount. This indicates that at least half of the 9 percent oxygen drop that occurred during the extinction could have been caused by geomagnetic reversals alone – more than enough, the study’s authors say, to have played a major role in the die-off.

This theory may explain even deadlier mass extinctions. Study coauthor Markus Fraenz of the Max Planck Institute for Solar System Research said that the oxygen loss caused by geomagnetic reversals could also have caused the end-Permian mass extinction (also known as the “Great Dying”), in which up to 97% of all species were wiped out.

Perhaps then, alongside the meteoric collisions, supernovae explosions and volcanic eruptions – which have variously been proposed to explain mass extinctions – it’s time to add another suspect. The invisible fluctuations of a physical field might not be as cinematic, but their consequences throughout history may have been just as dire.