Earth is Hot Right Now, but Not the Hottest (or the Coldest) Across the Solar System

Record temperatures in North America show how hot our planet is getting, but how does it compare to the rest of the solar system? 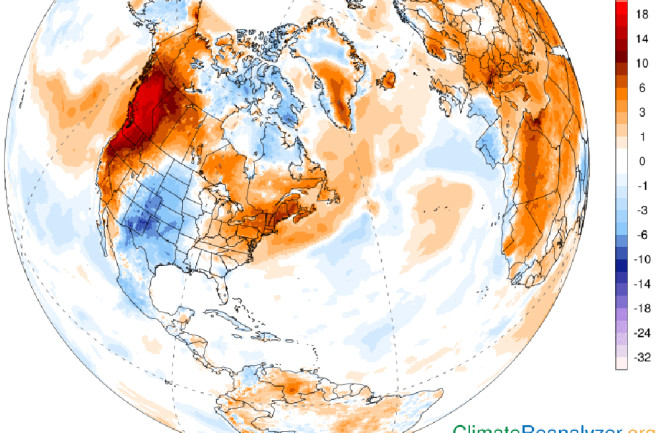 If you didn't know, it is hot in North America right now. Really hot. Like melting-cables hot. The Pacific Northwest and Canada have been the hottest they have ever been. Cities that are used to summer temperatures reaching close to 90°F (32°C) are feeling temperatures over 110°F (43°C). It is all part of the changing climate on our planet, and although it isn't the hottest temperatures ever recorded on Earth, this heat is covering a remarkable swath of the planet.

Now, the surface temperature of planets and moons is really controlled by three things. The first is the amount of solar radiation (called insolation) it receives, which is more or less dictated by the distance from our Sun. Closer to the sun, hotter you might be.

Second is albedo, or the reflectivity of the object's surface. Most rocky planets are made of dark rock that absorbs a lot of the energy it receives from the sun. If you are a lighter color, maybe if your surface is covered in ice, you reflect a lot of the energy back into space. So, darker surface, more heat absorbed, the hotter the surface temperature.

Albedo only gets you part of the way. The third thing is the greenhouse effect. Gases like carbon dioxide, methane, water vapor and ozone will let solar radiation through as visible light but then trap the infrared radiation that the surface of the planet emits after it absorbs the sun's rays. This means that an atmosphere with these gases will heat up during the day, but won't cool to well below zero at night because the greenhouse effect traps that re-emitted heat close to the surface.

The surface temperatures of the the planets and moons of our solar system are all impacted by these three factors. Let's take a tour!

The innermost planet, Mercury, gets hot during the day thanks to its close proximity to the sun ... and by hot, I mean a toasty 800°F (430°C). The dark, basaltic surface of Mercury absorbs a lot of that energy, creating a roasting surface. However, Mercury lacks any real atmosphere, so when the sun isn't shiny on the planet's surface, it quickly cools to -290°F (-180°C). That's over 1,000°F swing in temperature!

Venus Express image showing the planet's clouds (lower half) and infrared radiation in the clouds (upper half) that show the high temperatures of the planet's atmosphere. Credit: ESA

Venus, although farther out from the Sun than Mercury, is actually hotter at its surface. The temperature reaches an astonishing 880°F (471°C) on Venus and that's thanks to the runaway greenhouse effect of our sister planet. The thick atmosphere of carbon dioxide traps all that thermal energy being emitted back to space and the surface never cools. The greenhouse effect is so powerful that day and night temperature barely differ. These hostile conditions mean that the only landers we had on Venus operated for a few hours at the most. We're not sure what sent Venus on this path to greenhouse carnage, but hopefully the three missions headed that way in the next two decades will help unravel that mystery.

Earth has that "just right" combination of distance from the sun, albedo and greenhouse effect. The average surface temperature is around 60°F (15°C), so we have liquid water. If our atmosphere was devoid of greenhouse gases, that average temperature would be below the freezing point of water, so we need some greenhouse effect. Yet, it is a precarious position, so we want to avoid charging up that greenhouse too much.

Further out into the solar system, Mars finds itself wanting for heat. The thin atmosphere of the Red Planet means it has a weak greenhouse effect in place, so although much of the surface is covered in rocks that absorb heat, the average surface temperature is only -20°F (-28°C) thanks to the larger distance from the sun. Maybe earlier in Mars' history it could retain more of its heat with a thicker atmosphere, but these days, Mars is close to a frozen wasteland.

The thick atmosphere of Titan, seen in this Cassini image mosaic, keeps the surface from getting as frigid as other moons around Saturn. Credit: NASA.

When we head out into the distant solar system, most of the rocky or icy objects lack any atmosphere to retain the meager energy they receive from the sun. Out in the Jovian system, moons like Ganymede get as warm as -171°F (-112°C) as it received only 1/30th of the energy Earth gets from the sun. Out at Saturn, a moon like Enceladus is at -330°F (-201°C) and by the time you get to Pluto, that dwarf planet feels surface temperatures of -388°F (-233°C).

The lone exception to the really frigid temperatures of the outer solar system is Titan. It has a thick atmosphere that allows for the surface to remain a balmy -290°F (-179°C), which is warmer than it could be (see Enceladus) but still cold enough that the liquid on its surface is methane and ethane instead of water.

So, as you sit in the scorching summer heat in Portland or Seattle, remember that much of the solar system is a lot chillier ... or at least we're not on Venus or Mercury!