Early Farmers Stockpiled Nature's Grains Before Breeding Their Own 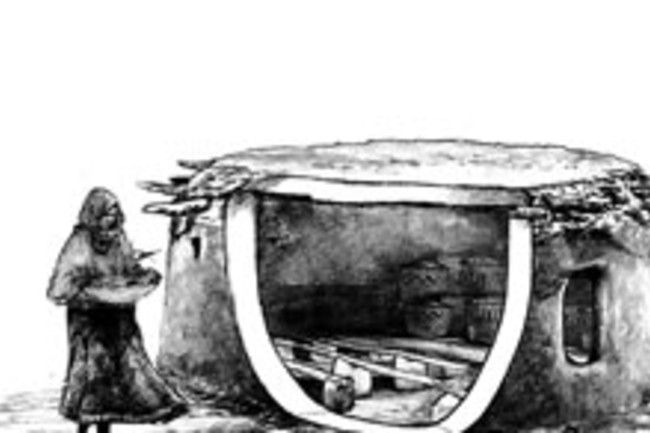 Archaeologists have found granaries that were used to store wild cereals near the Dead Sea in Jordan more than 11,000 years ago. The structures predate agriculture in the Middle East by at least a millennium, according to a report published by the scientists in the journal Proceedings of the National Academy of Sciences. The findings suggest that it took awhile to establish domesticated farming. In other words, the agricultural revolution likely spanned an appreciable period of time, during which our ancestors switched from hunting and gathering to growing their own food.

The earliest definitive traces of domesticated grains, wheat, barley, and oats have been found in the Near East and date back about 10,500 years. Yet much recent research suggests that plant domestication was preceded by a long period--perhaps thousands of years--during which prehistoric peoples cultivated wild plants without visibly changing their appearance or altering their genetic makeup [ScienceNOW].

The excavation of the Jordan settlement, known as Dhra', has provided the earliest evidence for a grain storage system; radiocarbon dating revealed the settlement was occupied for a century starting about 11,300 years ago. Researchers found four granaries among the village's 10 housing and food-processing structures, and say that they inferred the granaries' purpose from the microscopic

pieces of silica from barley husks [which] were identified in one structure. Though intact cereal grains have yet to be found, the granaries were situated between oval-shaped buildings where the researchers found stone tools for grinding wild plants [Science News]. Researchers say the stone-and-mud granaries were designed to protect the contents from pests through elevated floors intended to increase air flow and keep out rodents. Their roofs consisted of reeds or branches twisted around poles and were just under 10 feet in diameter.

The granaries indicate that even before domesticated agriculture was established, humans found ways to store wild grains, keeping them from going to waste. This would have allowed them to establish permanent settlements.

People in the Early Natufian period (15,000 to 12,800 years ago) were fairly sedentary but appear to have depended largely on the day-to-day availability of wild plants and animals for food, rather than food stores. But by 11,000 years ago, people seem to have made great strides, building silos and these more complex granaries [Scientific American].